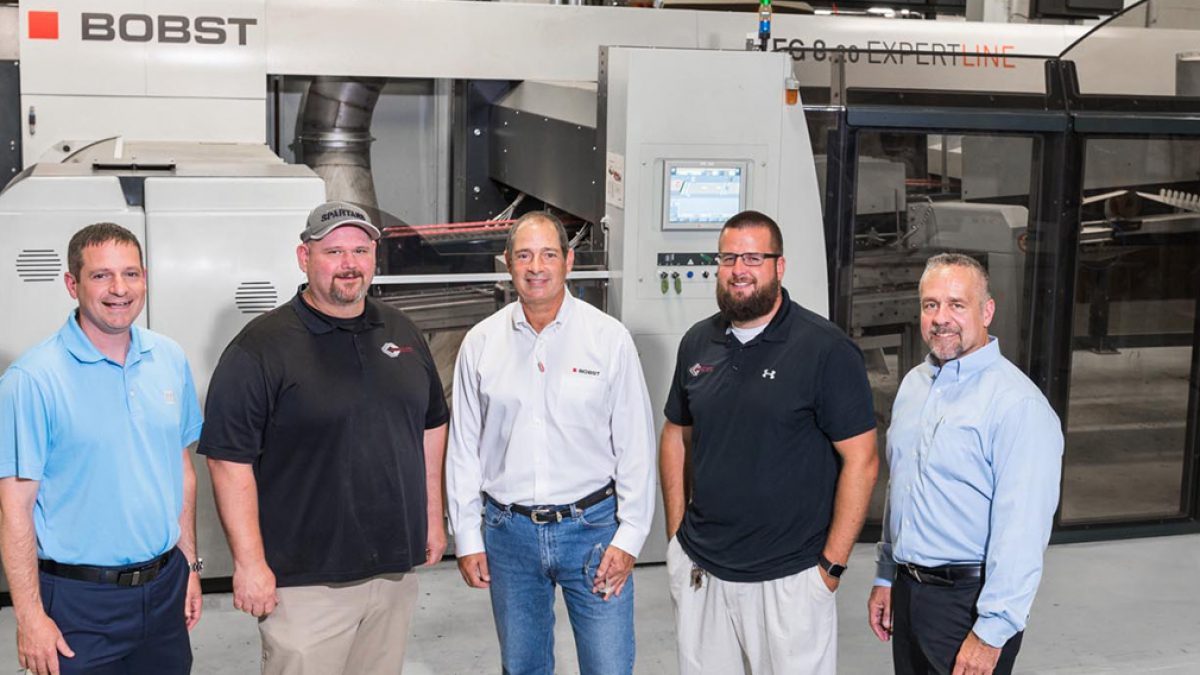 On June 24, 2017, Acme’s production crew achieved throughput of 186,439 boxes in an eight hour shift on a Bobst FFG 8.20 EXPERTLINE. According to the company’s President, Bob Cohen, “We averaged about 23,350 pieces per hour for the shift on a machine whose rated speed is 24,000 pieces per hour. We were running at up to 98% of capacity, which is almost unheard of. With most machines that produce corrugated, if you run at 50 percent of the rated machine speed you’re usually pretty happy. The record-breaking run was possible because the correct set of circumstances presented themselves. It was somewhat choreographed, not because we had planned it that way, but because we had two orders from one large customer that allowed us to run their orders in sequence. Once we got past the first hour, the speed would have been almost at full capacity. For the first hour, there was a little bit of downtime while the crews were getting everything ready and in the next seven and a half hours, they ran almost flawlessly.”

Acme Corrugated Box marked the record run at a factory celebration on August 7, 2017 in a presentation by BOBST of a commemorative banner to the Acme staff. The commemoration was attended by two representatives from Bobst North America: Kevin Marston, Strategic Account Manager; and Michael Schenone, Regional Sales Manager. “BOBST congratulates the Acme Corrugated Box staff on their achievement,” says Marston. “They have shown how the combination of a good crew and the right job can really get the best out of the high speed and excellent reliability of the FFG 8.20 EXPERTLINE.”

The team that ran the record breaking order.

Acme Corrugated Box will be 100 years old next year. It was originally started in 1918 by Bob Cohen’s father, and in its early years specialized in collecting and re-selling used corrugated boxes. “I’m the second generation and I have been involved in the company for over 48 years,” says Bob Cohen. “I have two sons in the business, one in sales and one in production, and they represent the third generation. We’re somewhat unusual as an Independent converter in a business sector dominated by five or six major producers. Being independent means you have to be more creative, more responsive, more flexible and more reliable just to stay in the game. You have to be willing to make the investment in technology to compete in this highly competitive business. We’ve been able to do all of that on a regional basis – we serve industry in the five state regions contiguous to our Pennsylvania facility.”

By the early seventies, Bob started manufacturing new corrugated boxes. In early 2000, Acme Corrugated Box Co., Inc. moved to its present 235,000 square foot facility in Hatboro, Pennsylvania, on the outskirts of Philadelphia. To continue to offer the best service available, Bob further integrated his work process by buying two narrow width corrugators in 2001. By 2010, he had installed a single 98” corrugator to support ever increasing growth.

“Our business model is service, to perform at a high level for our clients,” says Cohen. “All Bobst equipment is quick to set up and allows us to do almost any quantity on their equipment. The reason that we’ve always preferred Bobst is because of the precision of Swiss engineering. In 2007, we installed our first Bobst 1232. It further convinced us of the nature of the technology Bobst employs. Even after ten years of operation, we get square boxes because the machinery continues to hold strict tolerances. That’s important today because most of the clients we deal with use automatic packing equipment and that equipment is usually very sensitive to variation. What I find of incalculable value is Bobst’s attention to detail, engineering and technology which today’s customers demand.”

The record-breaking 8.20 EXPERTLINE is Acme’s newest FFG and was commissioned in April 2016. It is Bobst’s fastest running FFG, accepting sheets from 24.6 to 85.8 inches wide, in a wide range of flute types up to 0.32 inch thickness. Sequential Order Change (exclusive to Bobst) allows changeovers in one to two minutes, with only two operators required. This machine joined the existing Bobst 1232, 924 and 1228 FFGs at the Acme facility. They have been specially configured to mirror each other. The operating controls are accessible to each crew. The crews can easily move back and forth between the pair of machines.

“One of the reasons that we enjoy having all Bobst equipment is that even though they’re slightly different, the platforms are pretty similar,” says Cohen. “So for training purposes it’s much easier to train our people on the machines because they are variations of a theme.” The 8.20 has four print units, although it is mostly used for one or two-color work. “We do a lot of pre-setting,” says Cohen. “In other words, while we’re running one job, we will have the second job set up so the set-up time is minimized.”

Because the record-breaking run was so close to the full capacity of the FFG 8.20 EXPERTLINE, Cohen thinks Acme’s record will stand for a long time to come. “In most industries people never come close to 100% of rated machine speed, but we ran at 98% of machine speed, apart from set-up times. I don’t think anybody is going to beat that.”

Brian Kentopp, Vice President of Business Unit Sheet-fed, Bobst North America added, “Acme has long been a valued Bobst customer. It has been a pleasure to watch their growth and continued success in the marketplace. As Bobst continues to bring new technologies to the corrugated industry, we look forward to working together with Acme as one of the leading independents in the United States.”