Zerhusen Kartonagen, based in the town of Damme in north-western Germany, set a new world record on 19 October with their second corrugator, which went into operation in June 2022.

Within an 8-hour shift, 196,299 running meters were produced. Thus, the previous world record was surpassed, according to BHS Corrugated. The record-breaking shift, which ran the 2.8m wide corrugator, ‘Vicky’, had no downtime with an average speed of 408 m/min and a top speed of 452 m/min. In total, 545,933 sqm of board produced. The corrugator is a Speed-Line model, with a Modul-Facer A, Triplex-stacker, Hyperblade, and other new features. 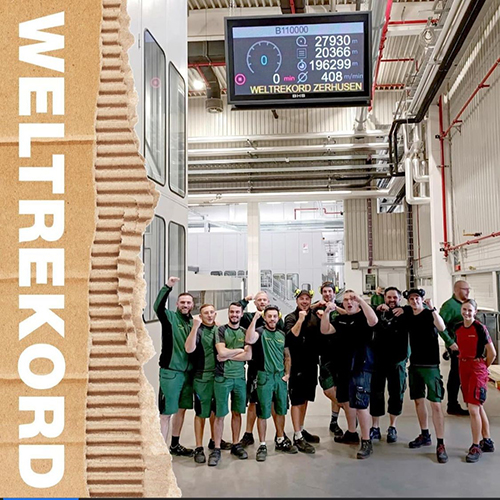 Zerhusen Kartonagen expects a turnover of €175m for 2022. As of January 2023, the company will have a production capacity of 500 million sqm of board and a converting capacity of 400 million sqm. In the national industrial park Niedersachsenpark, a second converting plant is currently being built on the A1 motorway in Neuenkirchen-Vörden, which will go into operation in summer 2023.