Since the beginning of fiscal year 2022, the Voith Group has left no carbon footprint at any of its worldwide locations. The company’s net zero concept comprises four fields of action: increasing the efficiency of its own processes, generating its own regenerative energy, using renewable energy sources, and offsetting the emissions that are currently still unavoidable. Progress has been made in all areas through various projects since 2012. 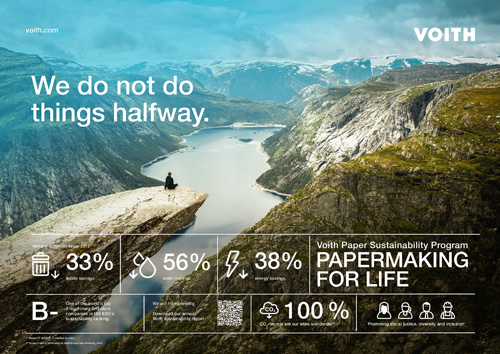 In Austria, for example, all Voith Paper production facilities now use electricity from their own solar power systems and also obtain electricity from 100 percent renewable sources for their remaining energy needs. In this way, Voith is sending a strong signal. Rico Schmalz, Operations Manager, Voith Austria, explains, “The photovoltaic systems contribute to our overarching goal of operating as sustainably as possible. We see it as our duty to take measures that make ecological as well as business sense in order to make our sites fit for the future. The plant installed in Frankenmarkt alone generates a yield of around 590 MWh each year. This is equivalent to the annual electricity consumption of around 150 households.”

Voith has taken responsibility in the area of sustainability for many years, setting ambitious goals for itself. To this end, Voith has been tracking relevant consumption indicators at its sites since as early as 2012 and initiating corresponding projects for improvement. As a result, Voith Paper locations were able to reduce waste by 33%, water consumption by 56% and energy consumption by 38% in relation to sales as of fiscal year 2020/21.

“By the end of fiscal 2026/27, Voith Paper’s own renewable energy generation will increase to more than 11 GWh per year,” adds Sophie Alice Fischer, Sustainability Manager, Voith Paper. “Alongside this, more efficient processes will reduce energy consumption by 2.5% per year in relation to sales.”