Smurfit Kappa has provided 240,000 tonnes of excess soil to the ‘Park in the Past’ project, a local heritage and conservation project in Wales. The soil, which became available due to an expansion at its Mold facility, has been repurposed to create the foundation for an ambitious community development including an authentic Roman fort. 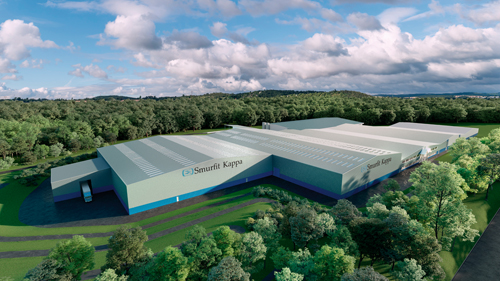 In the last six months, the soil has been transferred from the Smurfit Kappa manufacturing facility to the nearby ‘Park in the Past’ development which is creating several new amenities including a Roman fort, children’s adventure area, sensory spaces and rare species pond at the site of a disused quarry in North East Wales.

What’s more, the area from which the soil was removed has been transformed into a 3-acre nature trail containing a wide variety of wildflowers, as well as aquatic features for all types of wildlife. The new area, which is being used by both local residents and Smurfit Kappa Mold employees, will also have upwards of 10,000 trees and shrubs and a lagoon to support water drainage for a new property complex in the area.

Eddie Fellows, CEO – UK & Ireland, Smurfit Kappa, said, “The investment in our Mold facility is not only going towards the plant expansion; it’s also giving green space back to the local community. The benefits of this soil donation are twofold. We are thrilled to be able to contribute to this conservation project which is only five miles away from our site and will be a fantastic resource for the area.

“Secondly, creating the nature trail within our plant’s local landscape has made great use of the remaining space. We are deeply committed to supporting the communities where we operate and this initiative is yet another example of our circular approach.”

Paul Harston, Project Champion with Park in the Past, added, “It’s quite remarkable that we have been able to bring so much material from the Smurfit Kappa facility and reuse, recycle and repurpose it into the Park in the Past project. As one of the major employers here in Mold, it is great to see a company which not only cares about its employees and business, but also the community that it operates in.”