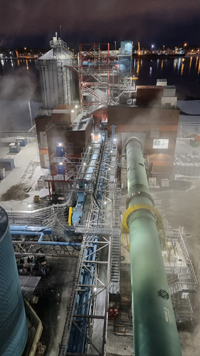 Now that the company has replaced its two oil-fired lime kilns with a biofuel-fired lime kiln, SCA Containerboard is claiming to be the first kraftliner manufacturer with fossil-free industrial processes.

The new lime kiln, part of the chemical recycling process in pulp production, was commissioned at the end of November. The construction of a new lime kiln is part of the major investment in the Obbola Paper Mill, where SCA is expanding to increase kraftliner production and meet the company’s goal for fossil-free manufacturing.

“The aim of our investment in a new lime kiln is to get rid of fossil oil, as well as to meet the need for expansion,” says Pär Micael Samuelsson, Project Manager. “We will eliminate 8,000 cubic metres of oil per year. Had we continued to use the two oil-fired kilns, we would have needed an additional 2,000 cubic metres to achieve the necessary sulphate pulping. Now we don’t need this and we have completely eliminated oil consumption.”

He continues, “The fossil-free lime kiln will also reduce our carbon dioxide emissions by 20,000 tonnes per year. In 2015, a biofueled lime kiln was installed at the Munksund Paper Mill. This means that, during routine operation, industrial processes at all of SCA Containerboard’s kraftliner mills are fossil-fuel-free.”

The role of the lime kiln is not entirely easy to grasp but, in short, it is a rotating kiln that burns limestone to produce calcium oxide, commonly known as quicklime. The quicklime, which is further processed, is crucial to closing the chemical recycling loop when green liquor is converted into white liquor. White liquor is then used to dissolve woodchips in fresh fibre-based pulp production, thus closing the chemical recycling loop so that no chemicals need be discarded.

The fuel used in the lime kiln is SCA’s own pellets, an environmentally friendly, renewable energy source with a high energy value manufactured from sawdust. This is ground into a powder in order to burn well and produce the required heat. By using pellets, a residual by-product of SCA’s forestry and industrial operations, the company maximise the value of the forest and obtain a resource-efficient value chain.