It was with sadness that OKAY Engineering announced the death of its much-loved Managing Director, Robin Kay, in March 2022. 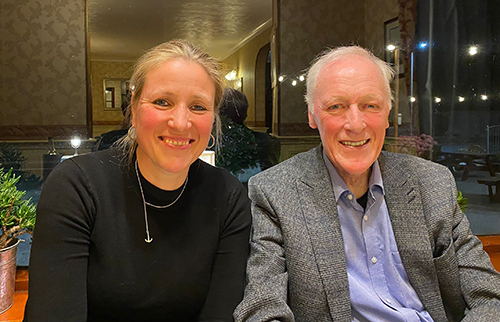 Left to right: Antonia Kay with her father, Robin Kay, who passed away in 2022.

Robin’s incredible run as Managing Director at OKAY Engineering started upon the death of his own father in 1975 and lasted until his retirement in 2020, only two years before his sad loss to cancer in March.  In addition to his 45 years as Managing Director, Robin actually worked at OKAY for over 60 years and he was devoted to it. An accountant by training, he also had the warm personality to bring in sales. Over all those years, he steered the business through seismic market changes, technology changes, changing customers, changing competitors as well as four major recessions, but mostly very good and happy times.

Under his care, the company developed from a design house for conveyors to a manufacturer of recycling equipment and, later, a design-and-build specialist for MRFs and waste processing plants.

Robin was also a well-known, highly respected and popular figure in the recycling industry and the company were overcome at the number of tributes they received as the news of his death spread around the sector.  “We are very proud of him and all he achieved, and that he was ours. He has left us with a fantastic company built upon his belief that ‘In our business, the customer is king’.  We will ensure the business remains guided by this core principle while we also develop his passion for standard machines customised to bespoke applications,” said Antonia Kay, Managing Director.

At his funeral, there was a tribute to Robin by his daughters Natalie Hollobone and Antonia Kay.