Premier and its customers help with community initiative in West Yorkshire

Premier have teamed up with some of their customers and the Woodland Trust, to create new hedgerows in West Yorkshire.

With clear blue skies the weather could not have been more perfect as staff from Premier’s Leeds branch teamed up with their Carbon Capture® customers and, with shovels in hand, take part in a special tree planting project to support the Woodland Trust’s MOREhedges scheme, specifically in the town of Keighley, nestled between the Airedale countryside and the Haworth Moorland in West Yorkshire. 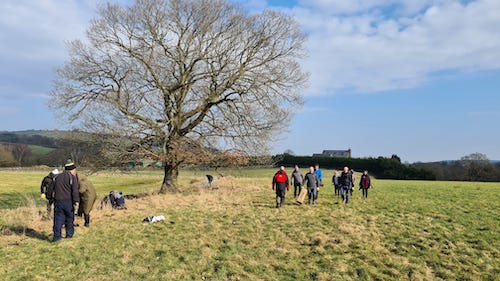 As part of the Woodland Trust’s woodland creation initiative, MOREhedges provides saplings, advice and funding for new hedging projects of 100-1000 metres, at sites around the UK. Hedgerows are important features of the countryside as they create new wildlife corridors that connect trees with the surrounding landscape.

Throughout the day, Premier and their customers helped to plant over 500 saplings, including species of tree such as field maple, hawthorn, hazel and crab apple. These saplings will form part of a planned 600m of hedgerow for the area and will help to provide landscape corridors with the adjacent woodland areas as well as beneficial habitats that support small mammals, birds and insects.

Hussein Ismail, Sustainable Business Director, Premier, comments, “This was not only Premier’s first tree planting event of the year, but it was also the first one that we’ve been able to host in Yorkshire. The weather was on our side and we’re thankful to everybody who attended, planted trees and helped to create a fantastic day.”

Premier’s work with the Woodland Trust began over ten years ago. The programme has grown to become the industry’s leading environmental initiative with well over 600 customers fully signed up and committed to the cause. To date Premier and their customers have raised in excess of £1.37m for the Woodland Trust, planting over 354,000 trees and capturing over 82,000 tonnes of CO₂; and the best part is 100% of all money raised through the Carbon Capture® programme, goes directly to the Woodland trust to help create and maintain native woodland around the UK.