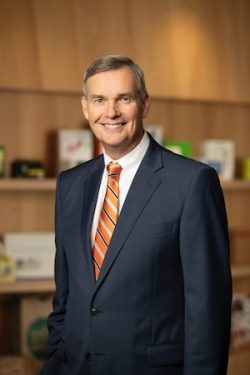 The Paperboard Packaging Council (PPC) has selected Steve Voorhees, former CEO of WestRock, as the recipient of its 2021 Robert T. Gair Award. The Award is reserved for individuals who have made significant and lasting contributions to the paperboard packaging industry.

Vorhees earned his undergraduate degree from Northwestern University and MBA from the University of Virginia, after which he spent the first leg of his career working for the Birmingham, Alabama-based energy company, Sonat. He went on to join the paperboard packaging company, RockTenn (which would later become WestRock as part of a merger under Voorhees’ guidance). There he held numerous leadership positions before being named CEO in 2013.

“I congratulate Mr Voorhees on his significant accomplishment. In fact, PPC has only given 19 Gair Awards during its 92-year history,” said Ben Markens, PPC President. “Only the most committed and exemplary individuals can receive the award, those who have left an indelible mark not only on the industry but on PPC as well as their own communities. Without a doubt, Mr Voorhees fits the bill.”

“I am grateful to the PPC for this exceptional recognition,” said Voorhees. “It has been a privilege to serve the paper and packaging industry, including WestRock as president and CEO. Thank you to all of the people who have supported me throughout my career and enabled this recognition, including my wife, Celia, and the incredible WestRock team members around the world who work tirelessly every day to connect people to essential, sustainable products.”