Packaging accounts for around 25% of all printed products. At the same time, the packaging market is the strongest growing market segment with around 3% growth on average. An important region is Asia/Pacific, with an annual growth rate of 4.6%. It’s the same picture the world over: brand owners have extremely demanding quality standards for folding cartons. The trends are ever declining runs, faster innovation cycles, shorter delivery times, increasing cost pressures, falling margins, more embellishments, zero defect production, and customised packaging. Heidelberg has the appropriate products for all of these requirements and showcased its comprehensive range of solutions for packaging printers at three events in Asia. The kickoff came at the beginning of September in the Heidelberg plant in Shanghai with the Packaging Day, which showcased the Smart Print Shop, followed by the subsequent Open House at Masterwork (MK) in Tianjin, where the current MK portfolio for finishing was presented. Pack Print International took place from 18th to 21st September in Bangkok and featured the presentation of the new design of the Speedmaster CX 75 for the Asian market. 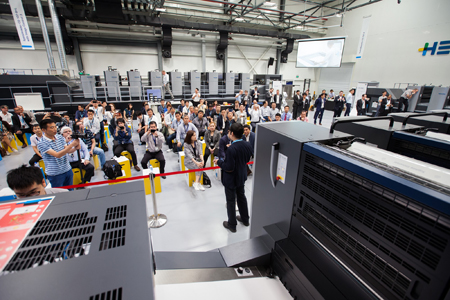 The Packaging Day in the Heidelberg plant in Shanghai showcased the Smart Print Shop.

The Packaging Day in the Print Media Center in the Shanghai plant welcomed nearly 100 visitors from the Asian region. The company showcased the integrated Smart Print Shop for packaging consisting of the Prinect workflow, the Speedmaster CD 102-8+L Multicolour with navigated printing, and finishing with the Promatrix 106 CS die-cutter, the new Diana Go folder gluer and quality assurance with the Diana Eye inspection system. The focus here was on the variety of finishing options such as inline embossing and drip-off special-effect coating. 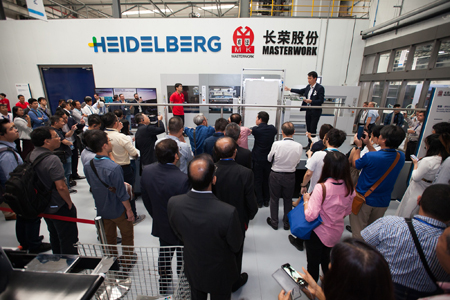 Application diversity is important in Asia in particular, so that there is a clear difference between the packagings at the point of sale. The interaction between digital and offset was demonstrated with a Versafire EV and the Speedmaster CX 75-5+L. Saphira consumables optimally tailored to the machines were used, such as the food-safe inks and coatings which are so important for packagings. The visitors were also shown how efficient Heidelberg’s service is, namely how non-productive times can be minimized and productivity maximised with Remote Service and Predictive Service.

“The solutions for integrated carton production with high productivity combined with options for differentiation have inspired me and shown me ways of achieving successful production in packaging,” said one participant at the event.

A number of visitors to the Packaging Day as well as other guests from around the world including France, Mexico and Russia attended the MK Open House in Tianjin. The partnership between MK and Heidelberg for finishing machines in the packaging market goes back to 2014. MK develops and produces the machines, while Heidelberg handles sales and service. This partnership was further strengthened in spring of this year, with MK becoming an anchor shareholder in Heidelberg with a holding of 8.5%.

The portfolio is constantly being expanded and adapted to customer requirements. For example, the Open House showcased the Promatrix 106 FC, which die-cuts and can apply hot foil, for the print embellishment sector. The Powermatrix 106 CSB, which die-cuts and embosses, is now also compatible with EU pallets. The Promatrix 145 CSB for bigger formats and high throughput is new. The Digimatrix 60 FC, the economical solution for short runs in the hot-foil embossing and die-cutting sector, was also shown for the first time. 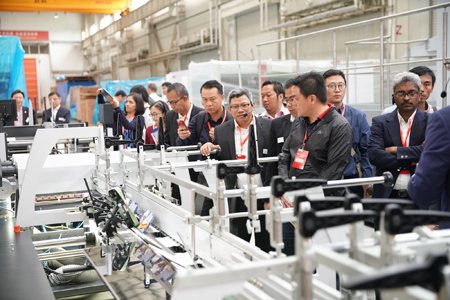 The visitors got to see the high quality standards during a factory tour. MK attaches great importance to high added value, currently around 60 percent, as a means to the best possible control over quality.

Since September of this year, Heidelberg has been shipping the Speedmaster XL 75 and CX 75 with a modern and ergonomic design for greater user-friendliness. The visitors to Pack Print International Bangkok got to witness the new design of the Speedmaster CX 75 for the first time. Together with the Easymatrix 106 CS die-cutter and the Diana Easy 115 folder gluer, it produced high quality folding cartons. The machine on display was purchased by a Thailand-based printing company and another Thai customer signed a contract for a Speedmaster CX 75. The other equipment on the stand was also successfully sold.

The visitors to the trade fair also showed great interest in information about Lifecycle Solutions and Heidelberg’s digital printing range. 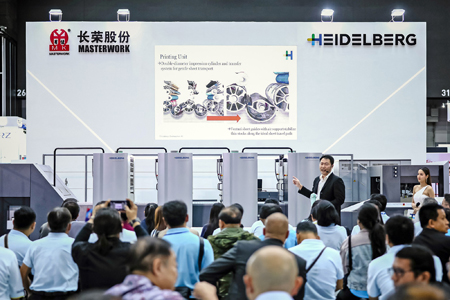 The new Speedmaster CX 75 was successfully presented at the Pack Print International trade fair in Bangkok.