O’Neil replaces three presses with one!

O’Neil, the Arizona-based commercial and packaging printer, has relocated to a new, state-of-the-art facility in Phoenix and recently installed a new fleet of high-tech equipment, including the Speedmaster CX 102-6+L with Push-to-Stop and UV technology from Heidelberg.

The company set upon a transformational journey over a year ago, with a clear focus on its future. “We needed to reimagine O’Neil Printing and rethink how we do business,” said CEO Anthony Narducci. 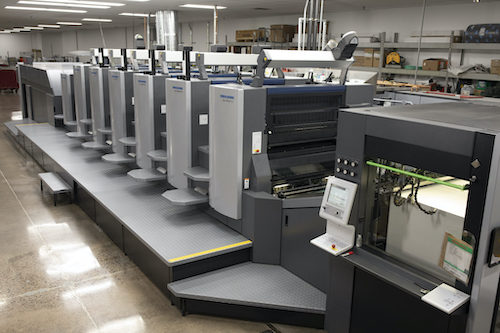 Since being installed, the company says it CX 102 is achieving 2.5 times more productivity than its three older presses combined. These productivity improvements include significantly shorter makeready times, less waste, faster run speeds and zero drying time to move jobs from press to postpress.

“By investing in this new technology, we were able to reduce our operating costs tremendously by consolidating the workforce and reducing our equipment overhead. Additionally, it has affected our quality and our speed tremendously,” added Narducci.

“With advanced press technology like Intellistart and AutoPlate Pro, the new press, positions O’Neil in a way we were never able to do before,” said Simon Betran, President. “This press technology tells a great story for our transformation moving forward. You can’t say that you’re a technology leading company and then have twenty-year-old presses.”