They have signed an agreement to purchase the assets of Cassowary Coast Cartons Pty Ltd, a carton erecting, distribution warehouse and retail outlet in Innisfail, North Queensland.

Cassowary Coast Cartons was founded by Jeff and Linda Trackson in February 2019 and working alongside Matty Skinner and Amie Trackson, has become one of the largest independently owned packaging suppliers in Far North Queensland (FNQ). 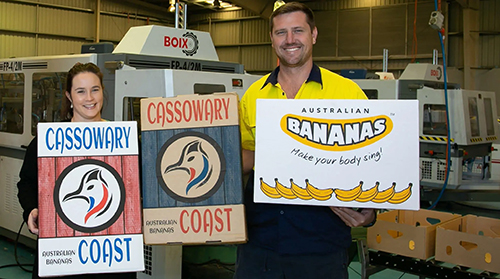 “Innisfail will become the third distribution centre for our ‘Packaging Queensland’ box plant based in Yatala,” said a company spokesperson. “With existing distribution centres in Bundaberg and Mareeba, and now in Innisfail as well, OjiFS is better placed to service customers in the wider Queensland State. This acquisition marks a significant step for OjiFS in the FNQ horticultural market and provides another example of our parent company’s confidence for investing in our Packaging Australia (PAU) Business Unit, as part of our broader growth and development plans. We are delighted that Matty Skinner and Amie Trackson will remain and lead the experienced sales and operation team at our new OjiFS Distribution Centre at Innisfail. Matty is well known and highly regarded in the Cassowary Coast region, and his detailed regional knowledge and packaging expertise will be valued.”