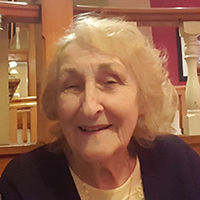 We are sad to report the passing of Mrs Win Mansfield, co-founder of Mansfield Board Machinery, at the age of 89.

Win was Managing Director of the family business from 1983 to 2003 after her husband, Mike Mansfield, passed away; he had founded the company with Win in 1978. When her son Ian took over as current Managing Director, she continued to work for another 12 years at the company. Win and Ian worked together for over 30 years, with ‘Nanny Win’ as she was fondly known being a continued supporting influence, dedicated and passionate about the company to the end.

While originally a State Registered Nurse by trade, her involvement in corrugated started right back in the 1960’s when husband was Chief Engineer at Tillotsons and then Smurfit plant in Wigan. She recalled a young Michael Smurfit being an occasional visitor to their home as plant equipment was discussed.

“With the coming 45th anniversary of MBM this year, she was so proud of this legacy and the staff for this achievement,” said Ian Mansfield. “Today, the company thrives and continues to succeed in the field of tooling for corrugated, with Win’s ethos still felt by us all.”