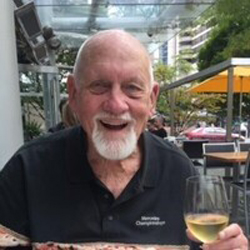 We are sad to report the death of Ross Buford Ausburn (pictured left), co-founder of SMC Packaging Group (formerly Southern Missouri Container). He passed away on Saturday, 26th December at 88 years old.

Ross was born on February 27, 1932, in Tulsa, Oklahoma, and graduated from Will Rogers High School in 1950. After graduating with a BSBA he enlisted in United States Marine Corps, attaining the rank of First Lieutenant. After his stint in the Marines he returned to the Tulsa area and began his career in the corrugated packaging industry at Hoerner Boxes. Following several promotions he ended up in 1963 in Springfield, Missouri, as the General Manager of the Hoerner sheet plant at Battlefield and Scenic. It was here that he started his long-term business relationship with his partner Charles Bachus, and in 1972, they founded Southern Missouri Containers, Inc. The company has grown to encompass four operations in Springfield and Kansas City, Missouri; Conway, Arkansas; and Tulsa, Oklahoma, and has been rebranded as SMC Packaging Group. Today SMC Packaging Group is one of the largest independent corrugated box manufacturers west of the Mississippi River and east of the Rocky Mountains.

Ross was active in many business organizations over the years including the Springfield Area Chamber of Commerce, Associated Industries of Missouri, AICC and Rotary International. He served on the Board of Directors of AICC from 1985-1991, first as a Regional Vice President for the states of Missouri, Kansas, Iowa, Nebraska, Minnesota and the Dakotas, then as a Director at Large. He was active on AICC’s Containerboard, Regulations & Sheet Supply Committee, the Safety Committee and Membership Committee.

He is survived by a son, Kevin Ausburn, and a daughter, Kristin Schneider; one brother and one sister as well as several grandchildren, great grandchildren, nieces and nephews.