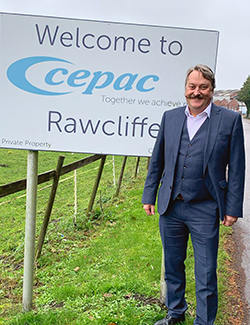 It is with great sadness we report the death of Richard Moore, who passed away after a short illness on 26th December, 2022 – he was 57 years old.

Richard was well respected by his peers and was a larger than life character who had worked in the packaging industry, including the corrugated sector, for many years. Up until the final quarter of 2022, he had been General Manager of Cepac’s Rawcliffe Bridge site, a role that he had held for the last seven years. Most recently, in October 2022, he had taken up the position of Managing Director at Watermill Press, a label manufacturer based in Bradford.

After graduating from Bradford University with a Science degree, Richard worked briefly for Reckitt and Coleman before joining the packaging industry as a Management Trainee. From there, he joined ABR Chemicals in a technical sales role, supplying starch to the industry. In 1995, he joined Linpac Packaging as Group Technical and Purchasing Manager; he held various roles at different sites in the company, including his first tenure at Rawcliffe Bridge as Manufacturing Manager in 2003. He left Linpac (latterly D S Smith) in 2007 to work for the Autism Plus charity in his home city of Sheffield. He then went on to PMS Diecasting, based in Rotherham, where he oversaw manufacturing development and a complete factory move. In February 2016, Richard returned to Rawcliffe Bridge, now owned by Cepac, prior to moving to Watermill Press in October 2022.

Steve Moss, Group Managing Director, Cepac, commented, “Richard worked tirelessly to develop the Rawcliffe site significantly over the past few years, most recently securing the latest investment in new conversion machinery before leaving us with our best wishes for pastures new at the end of last year. The whole Cepac business is shocked and saddened by his sudden passing at such a young age and our thoughts are with his family at this most difficult time.”

Richard leaves his wife Sue and his sons – Sam and Harry – as well as his parents, brother and sister.