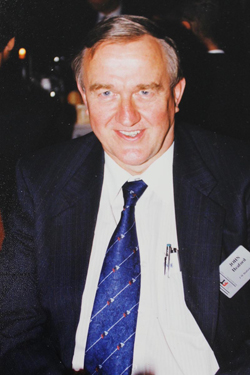 It is with sadness that we announce the death of John Heaford on 1 March 2022. He passed away after a long illness, surrounded by his family.

John started his career as an apprentice draftsman at 17 and after roles in several engineering companies set up JM Heaford in 1982. The company initially manufactured gravure proofing presses. Using his engineering and draftsman skills, he designed a flexographic plate mounter and proofing machine using high magnification cameras.

Passionate about his work, innovative and relentlessly hard working, John’s business legacy is 5,000 Heaford machines supplied in over 100 countries. He travelled the world visiting customers with agents and made many valued and long-lasting friendships along the way.

Led by John, the company achieved the Queens Award for Export twice; Heaford was also awarded a Special Achievement Award, for his outstanding contribution to the flexographic industry from the European Flexographic Technical Association.