Jim Curley, the first Editor in Chief of Board Converting News when it was founded by Ted Vilardi in 1985, passed away on Monday, June 6, in Ship Bottom, NJ, at age 78. A corrugated industry icon who possessed a depth of knowledge and an ability to communicate rivalled by few others, Curley reported on news and association events on a weekly basis until his retirement in 2012 after 27 years. 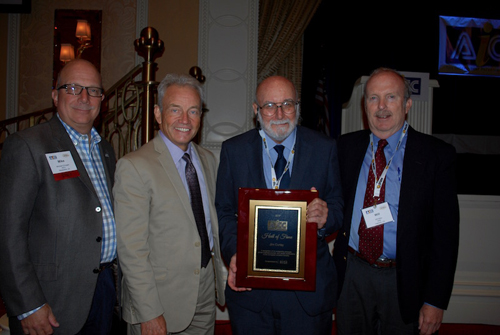 Jim Curley, second from right, was inducted into the AICC Hall of Fame in 2017 during AICC’s Meeting in Las Vegas. The award was presented by Will Miis, formerly of RISI, right, along with AICC’s Mike D’Angelo and Steve Young.

James Michael Curley was born May 2, 1944, in Tenafly, NJ, the son of Hugh and Mary Curley. He graduated from Bergen Catholic High School, received a BA from Boston College and an MA from Fairleigh Dickinson University. For nearly three decades, he was the Operations Manager for NV Business Publishers Corporation, where his chief duty was the publication of Board Converting News. He was also the U.S. Editor for International Paper Board Industry

Jim loved his hometown of Ship Bottom at the New Jersey shore, where he served as a member of the LBI (Long Beach Island) Library Board and as a freelance writer, he was a frequent contributor to The Sand Paper.  He was proud of his Irish heritage and was a longstanding member and president of the Amergael club of Stafford Township.

While Curley’s NV Publications ‘family’ and the corrugated industry  as a whole are saddened by the news of his sudden passing, all were quick to contribute memories of the man who touched so many lives with his sincerity, compassion, and sense of humor.

“Jim was with NV from the outset and was an invaluable employee, friend and family member,” said Jeneane Vilardi, who assumed ownership of NV Publications after the passing of her husband Tom in 2018. “He loved his Irish heritage and was an encyclopedia of information on that and anything Gaelic. He was there when I married Tom and I will always remember him as a humorous and extremely kind man.”

“The epitome of an editor, Jim had a mastery of the language and used his skills to report on and analyze events and developments in the industry he loved. If Jim wrote it, you could take it to the bank,” said Robyn Smith, President/Publisher of NV Publications.

Dan Brunton, Managing Director, Brunton Business Publications Ltd, remembered his first encounter with Curley. “I first met Jim 32 years ago, when I was 16-years-old, on one of our family vacations to New Jersey to visit the Vilardi family. It was about eight years later that I rubbed shoulders with him in terms of editorial duties, as I learned the trade. He was one of those old-school editors, with a solid background in journalism; he knew so many people in the North American industry, and he was respected for his forthright views and meticulous reporting. I know how much he was trusted by Ted and Tom Vilardi, it was a sad day when he retired and passed over the editorial reins to Len Prazych. I know Jim would be proud that ‘his’ BCN is in good hands. Rest in peace, Mr. Curley.”

As current Editor in Chief of Board Converting News, Prazych was especially moved by the loss of a colleague, a mentor and a friend. “I’m extremely humbled by the fact that I’m only the second person to ever to hold this position at BCN. I will always remember Jim and his generosity and graciousness in sharing both his knowledge of the job and the industry with me. I still feel him looking over my shoulder as I’m looking for just the right words that will allow me to finish another feature article and another issue, on deadline, of course. Thank you, Jim!”

Jackie Schultz, former Editor-In-Chief of Corrugated Today who retired in 2021, said, “Jim was the consummate reporter who possessed a natural inquisitiveness for uncovering all of the wonderful aspects of the board converting industry, resulting in countless articles for BCN and Corrugated Today. Whether he was writing about a box manufacturer or an industry supplier or covering an association meeting, he had a true gift in his ability to turn around copy very quickly and home in on the most important and interesting details. But what truly stood out about Jim was his kind-heartedness and generosity, often helping out others. He was a good friend to all and a mentor to me.”

Madeleine Crawford, formerly of Harper Machinery and mother-in-law to Tom Vilardi, remembers that Jim was one of the first people she met when she joined the industry. “He was a very private man but always included me when attending conventions all around the world. He was my partner-in-crime when it came to those things. I will always remember him with nothing but loving thoughts. I was very saddened to learn of his passing.”

“Jim was a friend to me and a friend to the Independent,” said AICC President Mike D’Angelo. “He was a regular at AICC meetings and visited a multitude of box plants. He loved the corrugated industry and his writing reflected that love while also showing a keen understanding of operations, personalities and market dynamics. I will always remember his professionalism, the twinkle in his eye, and his infections laugh.”

Former AICC President and current AICC Ambassador Steve Young remembers, “Jim Curley was one of the most loyal friends our industry has ever had. I remember saying when he was named to our AICC Hall of Fame that he was the corrugated and folding carton industries’ ‘Cheerleader in Chief.’ He never met a stranger among our members and suppliers, and we’ll always remember him for his Irish wit and his Jesuit wisdom, both of which shone forth in his weekly writings about our industry.”

“I met Jim 16 years ago when he interviewed me upon my recruitment to ICPF,” said Richard Flaherty, President of the International Corrugated Packaging Foundation (ICPF). “Jim was just a really nice person and a good friend to many. I will miss him.”