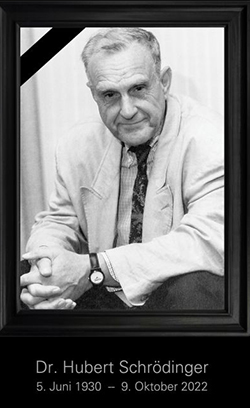 We are sad to report the death of Dr Hubert Schrödinger, owner of LEIPA. He passed away on 9th October at the age of 92, surrounded by his family.

Since he took over the management of LEIPA from his father Dr. Hans Schrödinger in 1961 – at that time in the fifth generation – he shaped LEIPA like no one before him. Many of his decisions, first and foremost the decision to switch to recovered paper as a raw material as early as 1973 and the acquisition of VEB Papier und Karton Schwedt in 1992, have left a lasting mark on the image of the group of companies and will certainly continue to do so for generations to come. In the spirit of an entrepreneur, he devoted himself not only to the task of working in the company, but above all to working for the company.

With his enthusiasm and commitment, he laid the central foundation so that this year the company not only celebrates 175 years of LEIPA tradition, but also offer a sustainable future with environmentally friendly products and solutions.

The award of the Order of Merit of the State of Brandenburg in 2008 and also the award of the Golden Citizen’s Medal of the City of Schrobenhausen in 2017 are just two examples and evidence of his social, economic and finally also human commitment.

With Till Huesmann as a member of the supervisory board of LEIPA and Robin Huesmann as part of the management of LEIPA, a seamless and secure transition of the LEIPA group of companies into the hands of the sixth generation takes place.