Heidelberg is once again underlining the company’s technology position in its core business with a world premiere. The option to increase the printing speed of the Speedmaster XL 106 to 21,000 sheets per hour makes this high-performance system one of the world’s fastest sheetfed offset presses and means an annual output of over 100 million prints is now also possible in folding carton production.

The new Speedmaster XL 106 was unveiled at the end of October during the Packaging Day held at the Heidelberg site in Wiesloch-Walldorf with the motto ‘Win the Packaging Race’. Over 300 existing and potential customers from all over the world took part in this event to find out about the latest trends on the packaging market and the associated solutions being offered by Heidelberg and its partner MK Masterwork.

This press is a particularly good option for companies producing packaging in the 70 x 100 format, who are calling for ever higher machine outputs and end-to-end automation. The increase in printing speed from 18,000 to 21,000 sheets per hour on the Speedmaster XL 106 is especially attractive to these users. The economic benefit is an 8-10% higher net output and – provided the full potential productivity is utilised – amortisation in around two years. In order to achieve this, Heidelberg has optimised some 200 components throughout the entire system, from feeder to delivery. For example, two servo motors now drive the feeder directly and, in the delivery, the weight of the gripper bars has been reduced and they have been adapted to the new printing speed to ensure stable and reliable operation. 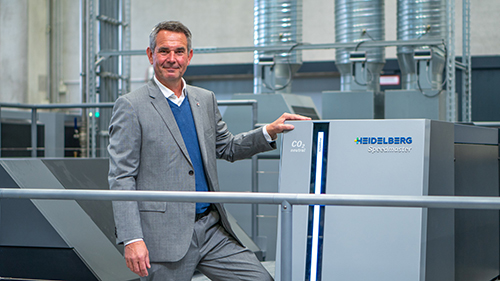 “Right from its market launch in 2004, XL technology from Heidelberg has set the benchmark in terms of productivity, performance, and reliability for high-end applications in our sector. Heidelberg has continuously enhanced this successful machine platform ever since,” says Ludwin Monz, CEO, Heidelberg. “With the newly unveiled Speedmaster XL 106, Heidelberg is taking sheetfed offset printing performance to the next level and enabling folding carton manufacturers in particular to become more competitive.”

Series production is scheduled to start in the second half of 2023, and further pilot installations will gradually follow over the coming months. The first few presses have already been ordered by customers from around the world.