New Master of the Worshipful Company of Stationers and Newspaper Makers 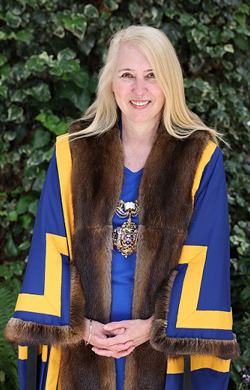 On 5 July, Moira Sleight was elected Master of the Worshipful Company of Stationers and Newspaper Makers. She takes over from Robert Flather (retired Chairman of Kolbus UK), who held the position since 2021.

Her journey as a Stationer began in 2004 as a Freeman, becoming a Liveryman in 2005 and joining the Court in 2014. Sleight (pictured left) was the first woman to be appointed as Editor of the ‘Methodist Recorder’, a weekly, national newspaper founded in 1861. She is currently its Editor and Publisher. She is a board member of the London Press Club and the Society of Editors.

She says, “I’m the second woman Master to be elected since the Company began in 1403 and there will be more!  It’s an opportunity to show people that we are a diverse and inclusive Company that’s relevant to the 21st century, not an exclusive men’s dining club.”