Lambeth joins ‘In The Loop’ with colourful solar-powered bins

Bright, colourful and eye-catching bins are being installed in the areas of Waterloo, Brixton, Clapham, Streatham and West Norwood, as a new on-the-go recycling initiative is launched by environmental charity Hubbub and Lambeth Council. The ‘Lambeth InTheLoop’ campaign will make it as easy as possible for people to recycle empty glass, plastic bottles, cans and therefore improve recycling rates. In addition, coffee cups will be collected separately in a small-scale trial in Brixton thanks to new dedicated cup recycling bins.

This new initiative in Lambeth is part of #InTheLoop, the UK’s biggest collaborative approach to boost recycling on-the-go, which was first trialled in Leeds in 2018, followed by similar trials in Swansea, Edinburgh, Dublin, Wimbledon and Telford. Across the previous pilot projects, over 2.1m plastic and glass bottles and cans were collected and recycled.

A recent waste study conducted by Hubbub and Lambeth Council reveals that only 6 in 10 plastic bottles, glass or cans ended up in the borough’s recycling bins. With Lambeth InTheLoop, 80 new look bins (40 pairs of recycling and rubbish bins) will be positioned strategically across Waterloo, Vauxhall, Brixton, Clapham, Streatham and West Norwood, busy areas with a wide range of residents, visitors and commuters, to encourage them to recycle on-the-go. 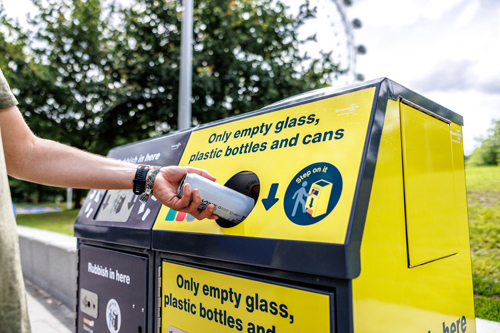 The bins are solar compacting and are fitted with smart sensors to detect how full the bin is, meaning they can capture more waste and need to be emptied less often. They also feature a bright design and clear messaging, to make it easier for people to know what to put in the recycling bin and reduce the frequency of the recycling being too contaminated with the wrong items to recycle.