Kroha uses the sensor in an FF 52i folding carton gluing machine from KAMA, which was retrofitted with a top gluing nozzle to enhance the machine’s flexibility. In the gluing nozzle, cold glue is applied to folding cartons by a P-500 application head, also from Baumer hhs. Immediately after application, the glue is scanned by the ULT-300 sensor. It checks the position of the glue, but also those areas where no glue should be applied. The ULT-300 detects narrow and wide glue areas, as well as lines and dots on a variety of substrates. With its auto-teach function, the sensor automatically detects the glue pattern. 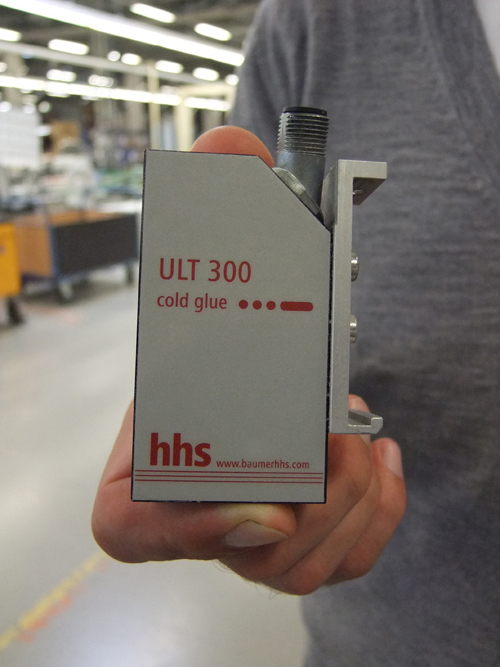 Installed at Kroha in 2015, the FF 52i is equipped with a bottom disk gluing unit, monitored by an LNT-300 sensor that checks whether the side seams were applied with the correct quantities of glue. And last but not least, a CT-30 colour sensor with integrated code reader, positioned just downstream of the feeder in the FF 52i, reliably rules out mix-ups. The entire system is controlled by an integrated Xtend2 system. Its central display gives machine operators an overview of all the Baumer hhs equipment.

What is more, the Xtend2 system with its Tracking & Ejecting module controls the folding carton gluing machine’s ejecting unit, which reliably ejects all flawed packages from the process. In this context, the equipment from Baumer hhs functions according to the fail-safe principle: each folding carton produced is considered to be defective until all sensors integrated in the machine have identified it as flawless.

“Thanks to the reliability and performance of the technology from Baumer hhs, we can guarantee our customers one-hundred percent quality assurance in product finishing at both our plants in Miesbach and Barleben. Especially for our pharmaceutical customers, this is a basic requirement for their collaboration with our company,” explains Hans-Peter Blockus, Head of Folding Carton Finishing at Kroha in Barleben.

Furthermore, the technology from Baumer hhs is further characterized by high ease of operation, short set-up times and the modular design of the systems, which can be flexibly expanded at any time.” These all are reasons why Kroha has always exclusively used systems from Baumer hhs for glue application and  the associated quality assurance in all folding carton gluing machines at both its plants. Several older machines still even have equipment in operation from the predecessor company Kurandt. Kroha also uses an Xmelt hot-melt system from Baumer hhs at each of its two facilities. These systems are used, for instance, when the instruction leaflets are not to be inserted inside a package, but rather on the outside into specially glued flaps. 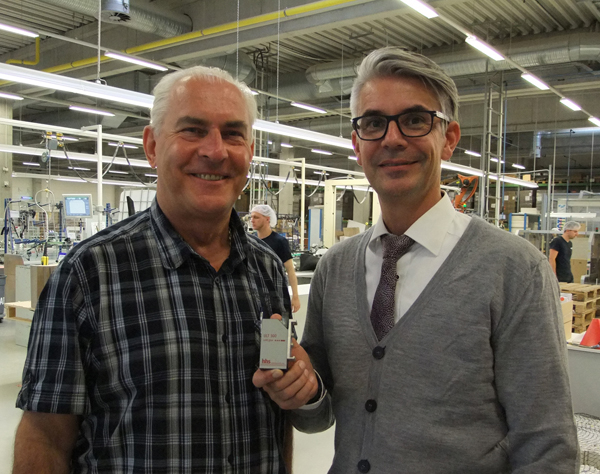 “The installation and start-up of the 5,000th ULT-300 underlines Baumer hhs’s position in this sector. We are pleased that this record-breaking sensor was delivered to Kroha, one of our oldest customers, with whom we have launched so many pioneering projects. Working closely, we have continuously expanded the possibilities for glue application and quality assurance in package production in the pharmaceutical and other industries,” said Markus Leier, Baumer hhs Sales Head.

Kroha GmbH was founded in the late 1970s by Franz Kroha, in Hausham, Bavaria, as a printing business. The company, which today counts 250 employs, has developed since the 1990s into a manufacturer of folding cartons, chiefly for the pharmaceuticals and food industries, as well as other growth markets. In autumn 1996, the company opened its second plant in Barleben, near Magdeburg, Germany, which mainly produces folding cartons and information leaflets for northern Germany and neighbouring countries. Kroha is capable of offering its customers maximum reliability thanks to the largely identical design of the production systems at both plants and its cross-facility scheduling and control. Both plants are certified on a regular basis to pharmaceuticals industry standards.