The 12th Koenig & Bauer roadshow in China since 2007 included five stops in different parts of the country and took place in mid-November. More than 800 executives took the opportunity to attend events in Xian, Kunming, Shanghai, Shijiazhuang and Fuzhou, where they were able to pick up the latest information on all aspects of modern print production, with a focus on sheetfed offset technologies and full-process solutions for packaging production, as well as innovative special applications and digitalisation.

Alongside practice-oriented lectures and presentations, enthusiastic discussion and intensive exchanges of experience, live print demonstrations at users in the individual regions are traditionally highlights of the events. At Shanxi Yusheng, for example, the roadshow participants were able to watch the production of pharmaceuticals packaging on medium-format presses of the Rapida 105 series. The company operates a six-colour version and a new seven-colour model – both with inline coating facilities.

Yunnan Qiaotong is the most important supplier of packaging for cosmetics, cigarettes and many other products in Kunming. Since its investment in a Rapida 106 with seven printing units, perfecting and a coater, the company has attracted several new customers from the cigarette industry. General manager Yin Kunxiong says, “The press has helped us to move up to a new technological level. At the same time, we have achieved significant enhancement of our efficiency and print quality.”

The centre of attraction in Shanghai was the first Rapida 75 PRO supplied to a user in China. This eight-colour coater press was installed by Shanghai Zhilin, one of the most important packaging providers in the country. Alongside a Rapida 106 with nine printing units and coating facilities, the company operates a new Rapida 106 with eight printing units, twin coaters and an additional printing unit ahead of the extended delivery. DriveTronic SPC is just one option on a long list of automation features.

Hebei Xindong is the leading packaging printer in its region, and is especially active in the fields of pharmaceuticals, foods, alcoholic beverages and high-quality board packaging. The declared goal of President Kong Jiandong is to become the number-one provider for pharmaceuticals packaging in Northern China. The recently installed Rapida 105, a seven-colour press with UV coating capabilities, is the company’s second investment after the purchase of a Rapida 164 for six colours and coating in 2014. The visitors were treated to a show of high-quality print production on both presses – including changeovers to special applications using gold, silver and film substrates. 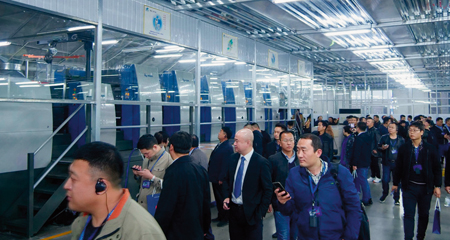 Fuzhou Xingkai has also invested in a seven-colour Rapida 105 – in this case with inline coating and an extended delivery in order to keep pace with the growing demand for high-quality packaging. This press, too, could be witnessed in live action during the roadshow. It boasts the largest number of printing units, the highest level of automation (for example FAPC plate changers) and the most modern technology of any press in the metropolitan area of Fuzhou. 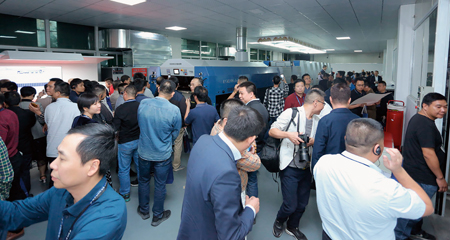 The print demonstrations attracted great interest among the Chinese print professionals, as seen at the Fuzhou Xinkai print centre in Fuzhou.

This year’s Koenig & Bauer roadshow demonstrated once more how print companies in China are operating successfully on the world market thanks to modern equipment and technologies. The companies can point to numerous unique selling points and a correspondingly high product diversity. In this way, they distinguish themselves from competitors and are ideally prepared to handle whatever market changes the future may bring.