Staedtler’s ‘Back-to-school campaign’ for 2020 was dedicated to the theme of ‘Distant Galaxies and Planets’. This boldly visualised at the PoS by the secondary placement developed together with Panther Display in the form of a rocket being launched vertically, on its way into space. The successful consumer promotion item has now received a national award. The corrugated board innovation prize, which is organised every two years by the Verband der Wellpappen-Industrie e.V. (VDW), has just selected the winners for 2020/2021. Panther Display was awarded second place by the jury in the Display category. 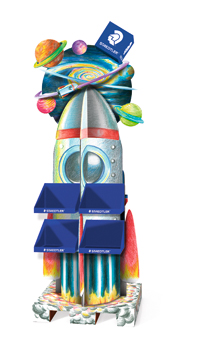 The jurors had to choose three winners in each of the four categories from the variety of clever ideas and sophisticated technical solutions to stand on the winners’ podium. The scoring system was based on an extensive list of criteria, which included aspects of economic efficiency such as low process costs or rational manufacture, as well as ecological aspects such as recyclability and the substitution of non-paper components. For the promotional packaging and displays, creativity and originality, print quality as well as the attractiveness and impulse power at the point of sale also counted.

The jury congratulated Panther Display on achieving this excellent ranking and said, “There was no question for the jury that the impressive implementation of the advertising concept ensures a significant attraction of attention at the PoS.”