The first cut of turf for Soenen Golfkarton on the former Bekaert site in Lanklaar, Belgium, was officially undertaken recently. “We are building an ultramodern factory, good for 200 jobs,” says Louis-Philippe Soenen, Director. 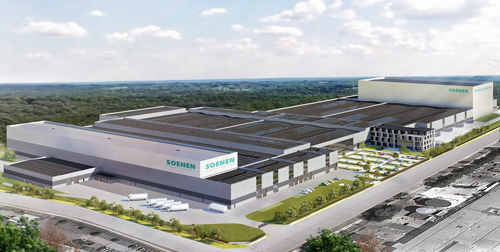 Soenen Golfkarton is building an impressive new factory of 132,500 sqm in Lanklaar. It represents an investment of more than €120m. “We have been making corrugated boxes in Hooglede since 1964,” says Louis-Philippe Soenen. “Here in Lanklaar, we are now building one of the most modern factories of its kind in Europe.”

Nathalie Soenen, HR Manager, adds, “Our second location in Belgium has to do with geographical expansion. A corrugated box, no matter how well made, is not really expensive and therefore does not allow much transport costs. A second location offers more security of supply for our customers in the event of a disaster scenario. We want to start here in 2023.”