Troy Miller has joined the Graphco sales team as Southeast Region Sales Manager. “Troy’s strong background in pre-press with Creo and Kodak, digital print with FujiFilm’s JPress and most recently in industrial, packaging and commercial pressroom with Manroland, will bring a unique perspective to our equipment recommendations,” stated Chris Manley, President, Graphco. 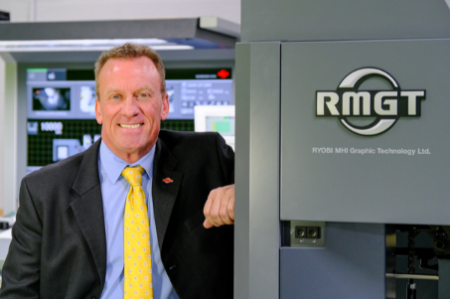 Graphco recently expanded its distribution of the RMGT press line into the Southeast U.S. and offers products such as GEW UV, Foliant Laminators, Lithec LithoFlash systems and many other related products throughout the region as well.

In his new position, Miller will be responsible for selling the full RMGT lineup including; the flagship eight-up 9 Series, the packaging oriented 10 Series, the six-up 790 Series Packaging Edition and the value priced six-up 760 Series presses — all of which are available with LED-UV curing and Insta.Color makeready technology.

“Offering the RMGT 9 Series to my customers was the real attraction to joining the Graphco team,” Miller said. “When I did my research and discovered that nearly 80 of the RMGT 9 Series presses have landed on customer’s floors just in the past few years, I knew this train was flying down the track. I contacted several customers who bought an RMGT instead of my press, and they all raved about the print quality, the reliability and the great treatment they received during the installation. Being sold myself made this move a no brainer.”