Swanline have filed a patent application for a brand-new design to make returnable packaging more sustainable, by avoiding the need for tapes. The innovative, sustainable pack named EzeE-comm© is revolutionary for the e-commerce sector. It is 100% recyclable, requires no tape or glue, and can safely be returned whilst remaining tamper proof in both the outward and the return journeys. 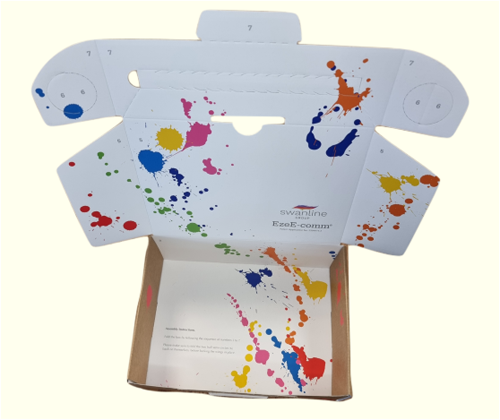 Ordinarily it is only a taped box that can be used for both an outward and return journey but EezE-comm’s locking mechanisms facilitate a safe, pilfer resistant solution that is 100% recyclable without contamination from polymer-based tapes or glue.

The EzeE-comm pack was developed through an inter-company initiative between Swanline Group and sister company, BoxMart. After recognising that taped e-commerce packs are not as environmentally sound as they could be, and that taping packs adds considerable extra cost, the design teams were tasked with creating a fully sustainable solution.

The collaborative approach between the team of seven designers allowed the best of many ideas to come together for the perfect solution. One of the most interesting features of the new hybrid pack is the winged locking system which was fundamental to the sealing of the unit. A semi-circle folded back on the outside locking wings is used to interlock into the inner flap of the main body. Once the two outer wings are engaged, the pack is fully sealed and locked without the use of tape or glue. The sealed unit cannot then be opened forcefully without the pack showing it has been tampered with.

Central at the front of the pack is an innovative zipper system that facilitates the correct opening of the pack once it arrives with the recipient This is different from conventional zipper systems because it does not go edge to edge and when opened, the subsequent newly created front flap becomes a fundamental part of the return system when required.

The return design, which cleverly evolves when the zipper is opened, also has an additional locking system using a front tab to interlock into the lid front flap on the pack. The consumer simply uses this additional flap to fully seal the pack so that it can be returned without the need for tape, making it completely recyclable.

Linsey Brookes, Director of Design and Graphics, Swanline, says, “Many traditional e-commerce packs have plastic tape used to secure the packaging for outward and return journeys, but it transforms the paper based corrugated board into a composite material containing plastic. This clearly undermines the whole concept of being 100% recyclable. EezE-comm solves this problem in a simple, efficient, and cost-effective way without compromising the 100% recyclability of corrugated board.  EezE-comm is ideal for companies who are looking for more sustainable options and have a greener focus for the future.”

The EezE-comm box can be printed on both inside and outside faces and can be produced in any flute, including micro flute and double wall. Swanline has applied for a patent for EezE-comm, and the product is now available.