Since its introduction in 2014, the eCon Sheeter from BW Papersystems has become a bestseller.

A year earlier, in 2013, a team of Product Managers and Sales Leaders at MarquipWardUnited (now BW Papersystems) sat down in Phillips, Wisconsin, USA, to discuss these fundamental questions. The team’s finding – many converters and folding carton plants wanted to buy an economical sheeter from a supplier with established spares parts and service network, with no compromise on cut quality or accuracy. But they also needed a simple and affordable machine which was not on the market at that time. The result – many customers bought a used machine or sourced their sheeter from small suppliers in Asia.

After interviewing potential customers all over the world, the MarquipWardUnited team prepared a detailed specification of the new sheeter.

Until that day, all sheeter development was aimed at faster, wider, more flexible, and more efficient models. For this new sheeter, a completely different approach was chosen, using modern design and manufacturing techniques. The team knew to create a quality machine at a price the customers were asking for would require an entirely new approach with industry leading efficiencies in manufacturing, shipping and start up. The trick would be to cater to the market sweet spot and handle other more complex applications with different machine models. They believed that the aggressive cost target was indeed achievable and the design team was challenged to complete it. 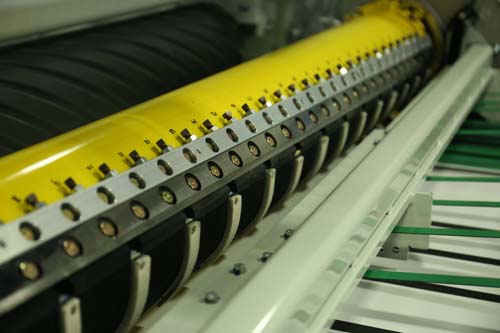 With the design process coming to an end, it was time to name the new sheeter. The name eCon was chosen. The name reflected that this sheeter was deliberately built to be economical, but what the customer got for that investment was the impressive selling point.

In 2014, the first machine was produced and unveiled during a multi-model Open House at the BWP headquarters in Phillips, WI, USA. During the four day event, customers from around the world came to see demonstrations on three sheeter models. Besides the new eCon sheeter, a mid-range SheetWizard and a 2,500mm wide fully automatic SheetPro were demonstrated. Two years later, the eCon made its European debut at drupa 2016. Visitors to the BW Papersystems booth soon realised that the cutting and stacking quality produced by the eCon was as good or even better than what they were receiving from the mill. They understood that this sheeter would allow their presses to run at maximum efficiency.

Now this year, in 2022, the eCon sheeter reached the milestone of 100 units sold. One hundred sheeters since 2014 means more than 12 eCon sheeters each year and more than one sheeter per month. eCon sheeters are operating on every continent and in addition to small and medium plants, eCon has found a home at sites belonging to some of the largest manufacturers of folding cartons in the world.