A Suffolk based charity, ‘Chevington, Chedburgh, Depden and Rede Community Council’, has received a £530 grant from the Confederation of Paper Industries (CPI).  The grant has helped fund a new sustainable wildlife garden as part of the Wildlife Friendly Chedburgh initiative, which is led by local volunteer Amy Savage.

The new sustainable wildlife sanctuary is outside the Erskine Centre in Chedburgh, the largest village hall in the area. The work has all been undertaken on a voluntary basis, by hardworking and enthusiastic local residents.

The completed works have transformed the space which had become somewhat overgrown, and this garden is now a wonderful asset to the village and will be of benefit to the whole community. The volunteers have created low-maintenance ‘wildlife zones’ with carefully chosen plants, shrubs, and bushes as well as ‘bug hotels’. The grant was awarded as part of the Confederation’s 150th Anniversary Grant Scheme, which enabled staff members to allocate £500 of funding to projects in their own local community which had an environmental benefit. 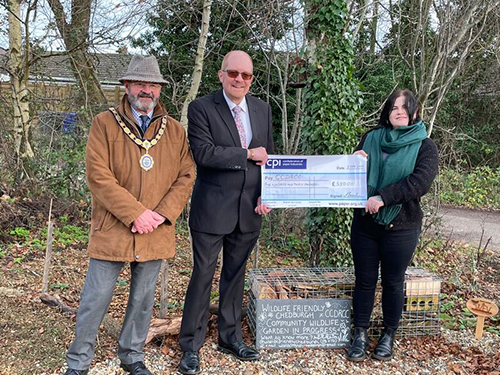 Andy Barnetson, CPI’s Director of Packaging Affairs, who is also a local volunteer for the project, was delighted to secure the funding. He said, “I am proud to have been involved in the wonderful work of Wildlife Friendly Chedburgh. The team, led by Amy Savage, are doing great work to enhance our village and protect local wildlife. The garden at the community centre has needed attention for some time and the transformation is remarkable. This is the first thing seen on entering the Community Centre car park and these works have made it a far more attractive space, which is also appropriate for local wildlife to use. I was proud to be part of the team who completed the work and I look forward to being involved in other projects, including the extension of the garden in the spring.”