Celmacch – kicking off 2022 with two installations!

Celmacch has begun the new year with two new installations. In both cases, the company has installed a Chroma HIGH TECH 1700 printing machine, in line with new flat bed die-cutters.

The first of the two lines has been installed in Italy, in the province of Bergamo, for a well-known company that have purchased a four-colour Chroma High Tech 1700. This machine has been placed in line with a Bobst Expertcut 1.6 die-cutter. The flexo printer has already been delivered and assembled at the customer’s facility and will soon be ready to start production. 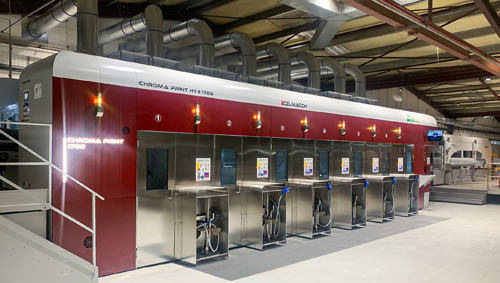 At the same time, Celmacch recently completed the installation of another Chroma High Tech 1700 x 1300mm – this time in a six-colour flexo print configuration –  in line with a Bobst Mastercut flat-bed die cutter. The line has been delivered to a Spanish multinational in one of their facilities in central France. This specific machine was developed to work with a wide range of corrugated sheets, but specifically for microflute board as small as N-flute.

During the testing phase at Celmacch’s facility in Italy, the line demonstrated that it is capable of processing corrugated board as thin as 0.7mm at extremely high speed. Moreover, the flexo printer is equipped with a quick anilox changing system in order to allow for high-definition printing on coated paper.

“These two installations are only the beginning of a busy 2022 for Celmacch,” says Luca Celotti, General Manager, Celmacch Group. “We are excited to confirm that within the next few months, we will be delivering even more machines to customers; some of these are destined for sites in the Italian market, whilst others to northern and eastern Europe.”