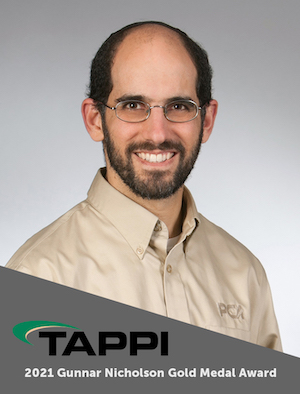 “Honestly, I was stunned when I first heard,” Frank said. “I am surprised, honored and humbled. The award is more for PCA than for me, as it is only through my interactions with people across the company that I’ve been able to do the things I’ve done.”

Frank began his career at PCA in 2001 and is the Director of Materials Research and Innovation. His primary focus is on product development. Frank also won TAPPI’s Harry J. Bettendorf Prize in 2015.

Within TAPPI, Frank has held leadership roles in FISCOTEC and Q&SMC and has also been active in CORBOTEC and ISO/TC6. He is currently chairman of the FBA’s Technical committee and is active in ISTA. These experiences have helped him to advance technical ideas for the benefit of the industry.