Harris Waste Management has been in business continuously for over 130 years, and now have one of the widest ranges of two-ram balers available worldwide.

At the top end of the range is the 200HP Harris BT two-ram baler. With a compression force of over 200 tonnes, and a 2500mm hopper opening, this machine is said to be in a league of its own, in that it is one of the only two-rams able to eject and tie off a bale, while simultaneously making the next. The machine completes its first bale and starts the eject cycle – it then starts to make the next bale against the ejector ram while in the forward position. Once this cycle is complete, the machine pushes the second bale into the eject chamber and starts the cycle again.  Harris say cycle times are approximately 20% faster than similar, conventional balers. 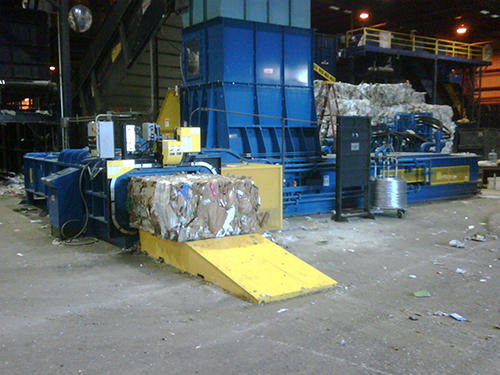 Harris has its own sales, parts and service operation in the UK. With substantial stocks of parts, a dedicated sales, the company is able to offer full sales, installation, commissioning, troubleshooting, parts & service support for all machines in the territory.