Zünd confirms it has received EDP awards for no less than three of its software tools. The jury declared PrimeCenter the ‘Best Workflow Solution’, while the Pick&Place Interface Option and the Visualizing Option are recognised as ‘Best in Robotics’ and ‘Best Print Support Tool’, respectively. 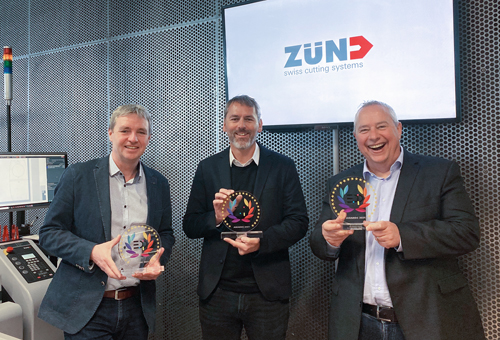 Zünd is known for its high-performance digital cutting systems. For some time now, the Swiss manufacturer has also been making a name for itself with user-friendly automation software such as PrimeCenter for prepress, as well as the Visualizing Option and the Pick&Place Interface Option for digital production. The latter are two highly effective solutions for removing/unloading cut parts, offering visual support and robot integration, respectively. In recognition of the wide-ranging benefits and price-performance ratio of these software solutions, a jury of experts from the European Digital Press Association EDP awarded them the distinction of ‘Best in Class’.