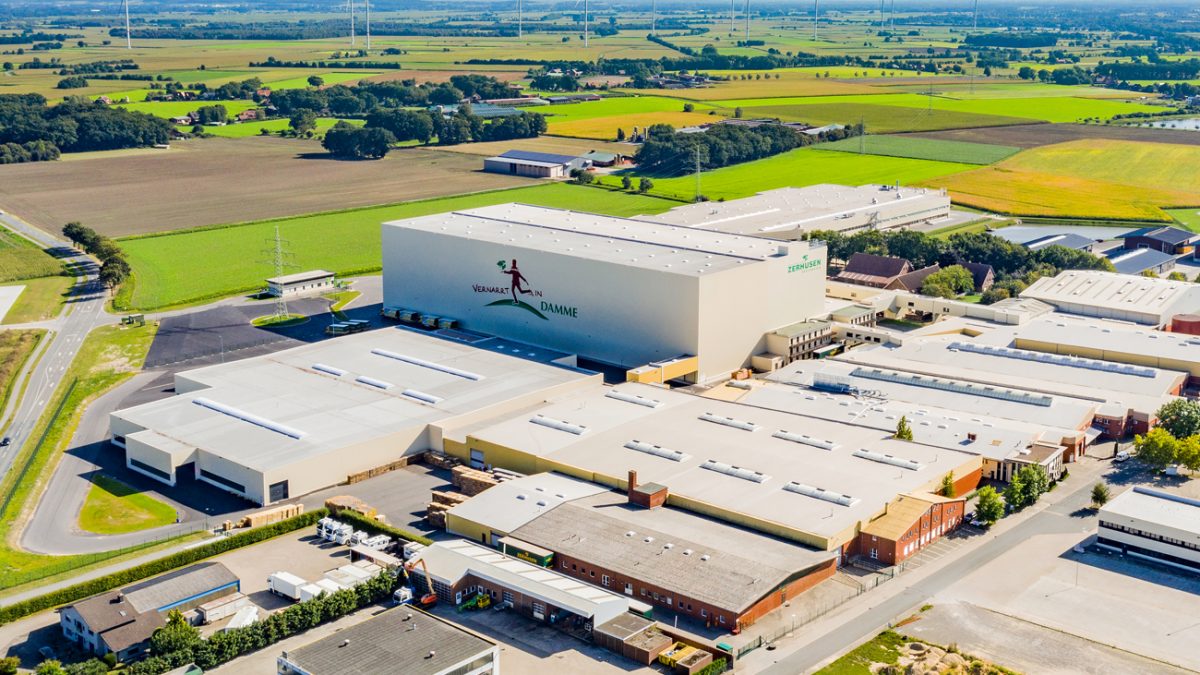 Based in the town of Damme in north-western Germany, Zerhusen Kartonagen has certainly come a long way since it was founded in 1987 by the father and son team of Günther and Roland Zerhusen. Starting as a packaging merchant with a total of three people, the business has grown over the last 35 years to become one of the larger corrugated packaging producers in Germany.

Having started out as a packaging merchant, buying boxes from other box plants, the company created a good name for itself as a JIT provider. In 1993, volumes had grown enough, that the owners decided to install a few pieces of converting equipment, including a Göpfert printer slotter – and buying board from Prowell (now Progroup), the business saw instant growth. A year later, a new casemaker was installed and by 2009 – just after the financial crisis – the owners invested in a high rack storage system from Hormänn Logistik, so it could cater for the obvious bounce-back in trade as the world came out of recession.

Thanks to the extra capacity for storage and enhancing its already good JIT service, the company reached the point where it felt it could justify installing a corrugator – the year was 2016.

“As our business grew rapidly, we were reliant on sheet feeders and the obvious worry was being let down by a broken down delivery truck or other form of delivery issue,” says Roland Zerhusen. “We had got to the stage where we felt we could justify a corrugator and we had good conversations with Jürgen Heindl, who was understanding of our decision. We had grown with Prowell, so we looked to him for advice and we naturally opted for a BHS Corrugated line, as we knew the quality of the board would be great.”

Today, the company employs 700 people, including around 40 apprentices, generating over €170m in sales. The factory covers over 80,000 sqm, sitting on a parcel of land of some 250,000 sqm. Customers are typically in the food industry, but also furniture and more recently, e-commerce. Customers are typically found within 400km of the site in Damme. 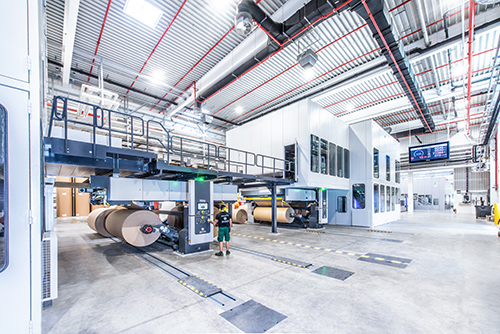 The company installed its first corrugator in late 2016, starting with single shift production. The machine was a 2.8m Volume Line, fitted with with Two Modul Facers MF-A with belt technology and a triplex dry-end. Capable of running at 400m per min, the machine started to run on a second shift by February 2017 and by the end of the year, it was running three shifts per day.

“Having completed my studies and also having undertaken apprenticeships within the industry, I moved to our company and started working on the corrugator,” explains Robert Zerhusen, who is now Production Director – Corrugators. “I worked on the Volume Line and got to really understand the technology. We were producing good volumes from the machine, reaching around 240m sqm per year comfortably, but this then brought its challenges in terms of maintaining uptime and keeping the growing converting department fed with board!”

In 2019, a second high rack storage system was installed, allowing for the next step forward. Continuing growth over the following couple of years brought the family business to a stage where discussions on a second corrugator begun in earnest.

“We had a solid five-year investment plan,” explains Roland Zerhusen. “We committed over €100m for new equipment, systems and infrastructure, which would all be undertaken between 2018 and 2023. We are on schedule.” As a result, a second corrugator was ordered in 2021, with the new line starting up in June this year.

No Compromise on Performance

Choosing a second corrugator was not simply about doubling capacity at the company. “We are a responsible producer and for us, the second machine is about removing issues of supply to our converting department and giving us additional capacity with which to grow organically,” explains Roland Zerhusen. “For example, with the new machine running in parallel with the first machine, our total output will be 300m sqm in 2022 and we will grow this to 350m sqm in 2023; that is not a massive leap, it is about sustaining the growth and reducing our exposure to risk in terms of corrugator down-time or breakdown. Our full capacity off the corrugators is 500m sqm per year and the converting department capacity is about 400m sqm annually.”

The new machine is a 2.8m Speed Line, which currently produces singlewall board at 450m per min, without any compromises concerning the production speed. The machine can be upgraded to run double and triplewall at a later stage – the machine was designed and delivered with the option to upgrade. The complete line is also connected to the BHS iCorr® system, where approximately 3,500 data points are constantly measured and evaluated to ensure a perfect technical condition and therefore highest possible output.

The two machines now sit in parallel, running as mirror machines – one with left-hand drive side, the other in right-hand drive. To ensure maximum uptime and no disruption, both machines have their own steam system, waste extraction and starch kitchens. Interestingly, the company has the option to generate steam by either gas or oil boilers, meaning they protect themselves nicely – particularly in the current climate with the shutting off of gas supplies from Russia. “Although they run independently, the services have been designed so that one set can run both corrugators in an emergency due to a breakdown, for example,” says Roland Zerhusen.

With the two high volume machines, work also had to be undertaken in materials handling as well. “We now have two bridges for smooth delivery to the converting department and an extended WIP,” adds Robert Zerhusen. “We worked with Minda to ensure board is transferred smoothly to converting and beyond.” 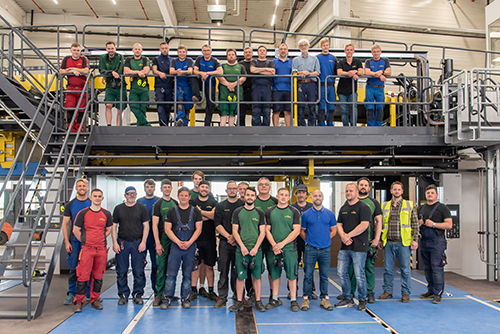 “We really hit the ground running with this new machine,” confirms Robert Zerhusen. “Three days after start-up of the machine, we produced 140,000 linear metres in an eight hour shift, which is impressive. “Our target is clear: setting a shift world record for linear metres produced within one shift. We are absolutely sure that our team will make it.” 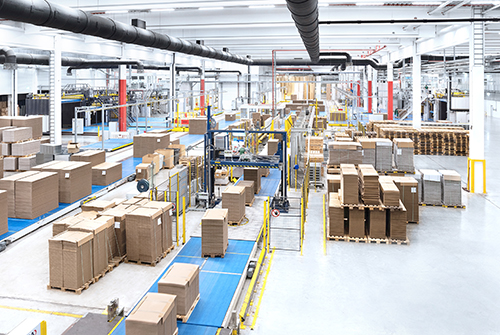 “With the new corrugator comes new capacity, which is already being utilised on the two new converting lines we installed earlier this year,” adds Marc Zerhusen, Production Director – Converting (and younger brother of Roland). “We added a 2.8m Göpfert flexo rotary die-cutter as well as a BGM 5.5m two-colour Containerline jumbo casemaker and we are expecting two more lines in 2023 to round of the five-year plan; a BOBST six-colour 924 Midline will be installed in January, followed by a 2.1 MASTERCUT with two colour flexo printer in April. We are excited about the future for sure.” 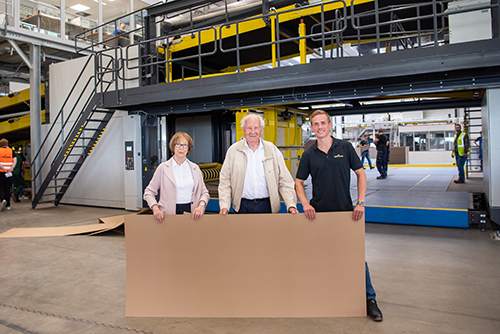 Left to right: Magda and Günter Zerhusen, with their grandson, Robert Zerhusen.

“We are a true family business,” concludes Roland Zerhusen. “My father still comes to work, even in his 90s; I work alongside my brother and now my eldest daughter and my son are fully active in the business. That is why we continue to invest, as the third generation has a lot to be excited about. And being adaptive to the market is important – we have seen a growth in the e-commerce and furniture industries, so much so that we have ordered a Universal Corrugated fanfold system to be fitted to the original corrugator; it will arrive later this year. We go about our daily business, ensuring our customers get the best quality packaging with the best levels of service and support from us. Of course, the relationship with our suppliers is critical to our success – without strong relationships with paper mills and our machinery suppliers, we would not be where we are today.”