Around nine years ago, Wellkistenfabrik Fritz Peters GmbH & Co. KG in Moers, Germany, started on the road to full optimisation of their production processes, which significantly increased productivity and flexibility. With a BOBST FFG 8.20 BS EXPERTLINE, which went into operation in early 2020, the packaging manufacturer further strengthened its market position.

“Today our customers involve us closely in their packaging development. We’ve worked toward this in recent years,” explains Winfried Flemmer, CEO. “Back in 2012, we thought let’s do away with cookie-cutter products and the price wars that so many competitors have to deal with.”

Together, Flemmer and the current operations manager Jonas Grundmann, developed a strategy for total process optimisation. Automation and productivity were to increase significantly. Machine downtime and production bottlenecks, especially at peak times, were to be eliminated. Investments in the latest technology were aimed at freeing up shifts for additional jobs.

“The next logical step was expanding our capacity in the inline area,” recalls Grundmann, naming one of the main reasons why a Bobst FFG 8.20 BS Expertline was chosen. “With this automatic inline machine, we now produce jobs in one step that would have required two work stages in the past.”

Moreover, in production of premium boxes, the machine offers the flexibility that the converter needs to meet the market’s latest demands. “The FFG 8.20 BS Expertline reliably processes doublewall grades, such as BC flute; it produces packages with tuck-in bottoms and prints with high register accuracy,” says Grundmann. The machine covers a broad spectrum: it converts corrugated board from 1.2mm to 8mm and sheet sizes from 250 x 625mm to 1050 x 2180 mm. The maximum print width is 2000mm.

The FFG 8.20 BS Expertline at Wellkistenfabrik Fritz Peters is equipped with four flexo print units and hot-air dryers, at speeds of up to 18,000 sheets per hour. Grundmann adds, “With packaging that doesn’t have to be die-cut, the FFG 8.20 BS Expertline actually gives us a maximum speed of 24,000 sheets per hour. This machine is made to go full throttle.”

Installation was planned and carefully prepared in close cooperation with Bobst. The machine stands on a solid foundation that absorbs any vibration. It forms the basis both for high print quality and for precise folding and gluing. “Sheet transport is well designed on the machine. It eliminates fluctuations, which is why it produces boxes with exact gap widths. We always specify a gap width of 8mm and maintain it on the machine at a tolerance no greater than ± 2 mm,” says Grundmann.

The high precision in sheet transport begins with a DFB (direct feed belt) inserter that works without feed rollers. It feeds the sheet directly to the printer’s vacuum transport. Even with light sheets, it eliminates any calibration losses, so the boxes have better characteristics. 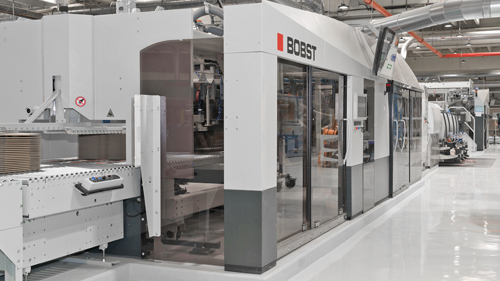 For Wellkistenfabrik, another highlight is the fluid folding device in the slotter. It sprays a small amount of water on the parts of the box where folds are made. “The moistening makes the folds more precise. We mainly turn this option on with doublewall, such as BC and EB,” Grundmann says.

The calibration section in the folder gluer also helps ensure high-quality folded boxes by perfectly aligning the folded sheets, again improving the dimensional accuracy of the completed packaging. “So far, we’ve never had a complaint about a box from the FFG 8.20 BS Expertline,” says Flemmer, stressing that the boxes work perfectly in customers’ automatic filling machines.

Developed on a new platform, the inline machine stands out for its simple, intuitive operation. This is evident in the short setup times. Most jobs that run in Moers are between 5,000 sqm and 15,000 sqm. This means quite a few job changes per shift. “During a typical morning shift, we process 16 jobs through the machine and 11 jobs on the afternoon shift,” says Grundmann. These days, the machine is usually run for two shifts. This means the plant has reserve capacity, so it can take more orders for premium folded boxes.

The FFG 8.20 BS Expertline is connected to Bobst’s Remote Service Helpline Plus. The technicians can dial into the machine controls, analyse the process and in most cases fix malfunctions online. “The Bobst Services team is committed and well qualified. We also have to thank the instructors’ efficient training, which enabled efficient commissioning,” Grundmann says. “We made the right investment decision.”

Wellkistenfabrik Fritz Peters GmbH & Co. KG was founded in Krefeld in 1938. Due to lack of growth options in the city, the company moved its production to Moers in the mid-1950s. The factory’s specialty is optimised packaging solutions for customers in a great number of industries. Production of e-commerce packaging is one special focus. Wellkistenfabrik belongs to the Peters groups, which has a total of eight subsidiaries.The holistic process optimisation strategy devised by Winfried Flemmer and Jonas Grundmann is moving Wellkistenfabrik Fritz Peters into the future.

UK-based Weedon PSC has recently started up a new six-colour HQPP Weipong flexo printer. The machine, which is the company’s largest ever equipment purchase, has been installed at its Hednesford site in Staffordshire and is now operational.

Triumph Sheets is home to one of the biggest corrugators in the world: an ultra-wide 132″ corrugator from BHS Corrugated. This went into operation in October 2019 in Cleveland, TN….

NEWW Packaging and Display celebrates 185 years of business, by investing in an ‘Engineering Marvel’

HP’s One Package for LIC of Italy

The Italian corrugated packaging producer – and one of Europe’s most advanced digital printing operations – has rolled out the latest dedicated software interface for its HP PageWide T1190 Press.