U.S. Display Group’s new Barberán Jetmaster digital press is having more of an impact on daily production than originally anticipated

Greg Moore, President of U.S. Display Group, is a corrugated industry veteran who has seen many changes over the years. He says one in particular is generating a new level of enthusiasm and that is the introduction of digital printing. “In my 30 plus years in this industry, I think single pass high speed digital printing is probably the biggest change that I’ve seen.”

Moore became familiar with the technology while searching for a new flexo press for U.S. Display Group’s Tullahoma, Tenn., facility. The sheet plant serves a wide variety of markets for products sold at nationwide retail chains, such as Home Depot, Target and Walmart. “Our business is primarily jobs that are a combination of litho and flexo. We felt like we needed a new multi-color five- or six-color flexo press. That was my plan,” he says.

During his research he discovered the availability of high speed digital printing technology for corrugated. The flexo press was put on hold and he and Dennis Mehiel, Chairman of U.S. Corrugated, took a trip to Bennett Packaging in Lee’s Summit, Mo., to see the Barberán Jetmaster digital press in operation. Mehiel purchased two on-site with an option for a third. One is installed at U.S. Corrugated’s Cerritos, Calif., sheet plant and the other is at Moore’s plant in Tullahoma.

The six-color Barberán 1750 was installed at the end of 2018 and is running two shifts with a third shift planned very soon. Moore says he was “pleasantly surprised” at how quickly the plant was able to fill up the machine. “As part of my justification for the machine I estimated that I would be able to transition 75% of the litho jobs to our digital printer and that number has exceeded 90%.” 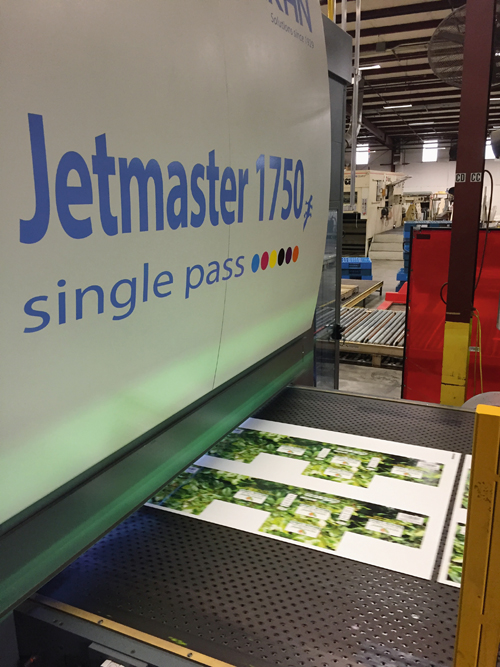 Even more surprising to him was the amount of multi-color flexo jobs that were moved over. “I didn’t think about any flexo printing transitioning over to digital. It never entered my mind primarily because of the cost of the inks,” he says. “But that has actually happened and the reason is the makeready times to set a job up on the digital press and get it running versus hanging four, five, six plates on a flexo press and getting those in register. Sometimes we can be finished with the job on the digital press before we would have gotten the flexo press up and running.”

In most instances Moore says the combination of makeready speed, run speed and low waste has made digital as competitive as flexo. In addition, moving jobs from flexo to digital has resulted in significant savings for customers, especially for larger orders, and they were able to upgrade their artwork.

The Jetmaster’s rated speed is 16,000 ft per hour. It uses UV curing inks, has injection heads and prints in CMYK and light cyan / light magenta or orange / violet, which broadens the color spectrum to cover 90% of Pantone colors. One of the reasons why U.S. Display Group chose the Barberán press was because of the flexibility to buy inks from several different suppliers. The company uses Toyo Inks and Fuji Primers.  So far, the primary substrates through the machine have been mottled white and white top liners as well as kraft, Foam core and Coroplast. 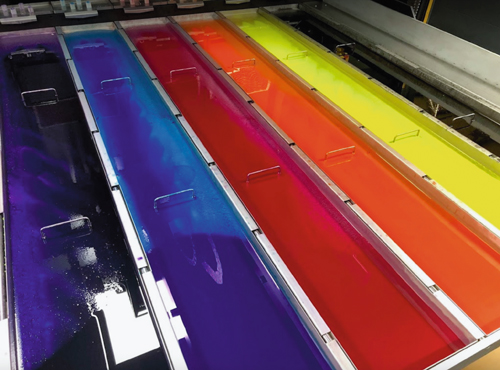 Nearly all of the printed jobs are converted on one of the company’s five die-cutting lines. Moore says he is evaluating the digital cutting technology that is currently available.

When deciding which jobs are best suited for the digital printer, Moore says he has no definitive answer. “I’m sure there’s a number where it doesn’t make sense from a cost standpoint, but in our business and the mix of business that we have, I haven’t found that number yet. Because of the size of the digital press and the makeready time it gives you so much more flexibility in how I lay jobs out.” The Jetmaster is 68- x 120-inch and the six-color stand-alone flexo press is 50 x 80 inches.

“Our largest litho press is 80-81 inches so we had some large displays that we had to run in several pieces. Now with the size of the digital press we’re able to reduce the number of pieces or components involved. So two or three litho labels may go together to make a pallet display. Now I can run all those together,” he says. 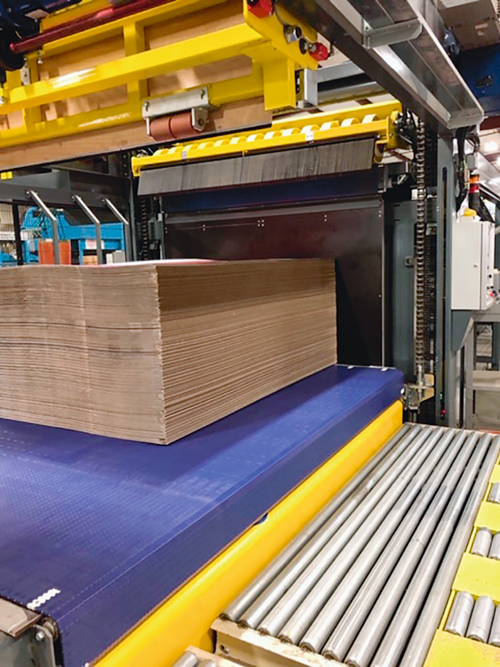 The Jetmaster is manufactured at Barberán’s headquarters in Barcelona. Moore spent a week at the factory with his press operator, maintenance and pre-press managers for hands-on training before the press was installed.

Prior to purchasing the Jetmaster, the Tullahoma plant’s experience with digital printing was limited to mock-ups and samples run on its Canon Océ multi-pass machine. Moore was confident that this experience would provide some crossover knowledge that could be applied to file preparation for the new press. “I vastly underestimated that,” he says.

“We have our own graphic designers who work with production art for all the things that we sent to the litho providers as well as the plate manufacturers on the flexo jobs and we had the Canon so I thought, ‘This will be a change but it won’t be a significant change.’ It does require a lot of attention to detail and ability, knowledge.”

He involved the graphics department as soon as the press was purchased. “We trained people on how to prep and RIP the files. Then I hired another digital pre-press person from a competitor and I also added a pre-press manager from a former litho supplier,” he says. “We realized pretty early on it’s different and we were becoming our own pre-press department. That has been a very eye-opening experience. A lot of things that the litho suppliers did we took for granted. That has been the biggest area of improvement from day one to right now. I feel really good about where we are today with that process.” 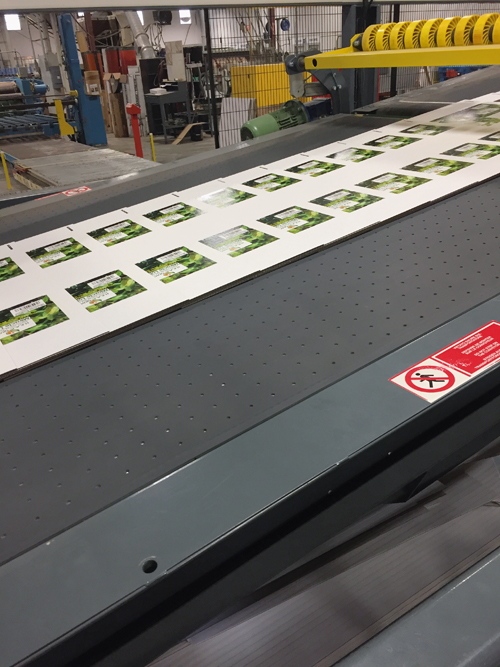 U.S. Display’s total digital investment was about $5.5 million. Moore offered a few words of advice to fellow board converters. “I have a long list of things and I keep a running list of things that we’ve learned. It’s a big commitment. You’re talking millions of dollars so you have to make sure that you’ve got the volume and you’ve got to be able to keep it fed. Evaluate the opportunity that you’re going to have in terms of the volume,” he says. “The second thing is my biggest underestimation was the front end part of it. You really need to think about that and make sure you’ve at least got the people in place who can do the things that you need to do on the front end. Fortunately for us, because we were already doing the litho, I think it was a much easier step for us than it would be for somebody going from brown box to digital. It’s a different animal. That step is a smaller step if you’re already doing high graphics litho or flexo.”

He also emphasizes the importance of having the right people to operate the machine and handle pre-press and other aspects of digital printing. “You could have the best machine in the world but if you don’t have the people to run it you’re not going to gain the benefits that you should be getting. And that’s true on the machine and the pre-press department.

“I’ve had so many people ask, ‘Knowing what you know today would you do it again?’ and the answer is ‘Absolutely.’ I would have done it sooner had I known.”

Moore expects the technology to continue to evolve. “As an industry we’ve only scratched the surface. The benefits are definitely there and over time more people will adopt this technology,” he says. “I don’t think it’s ever going to eliminate offset litho printing and certainly not flexo printing. There is a place in our industry for this technology and the market will drive that. I don’t think it’s going to eliminate anything. I think it’s going to change everything. Fortunately we had an owner in Dennis who saw the benefit and immediate impact it could have on our industry and I think he was absolutely right.