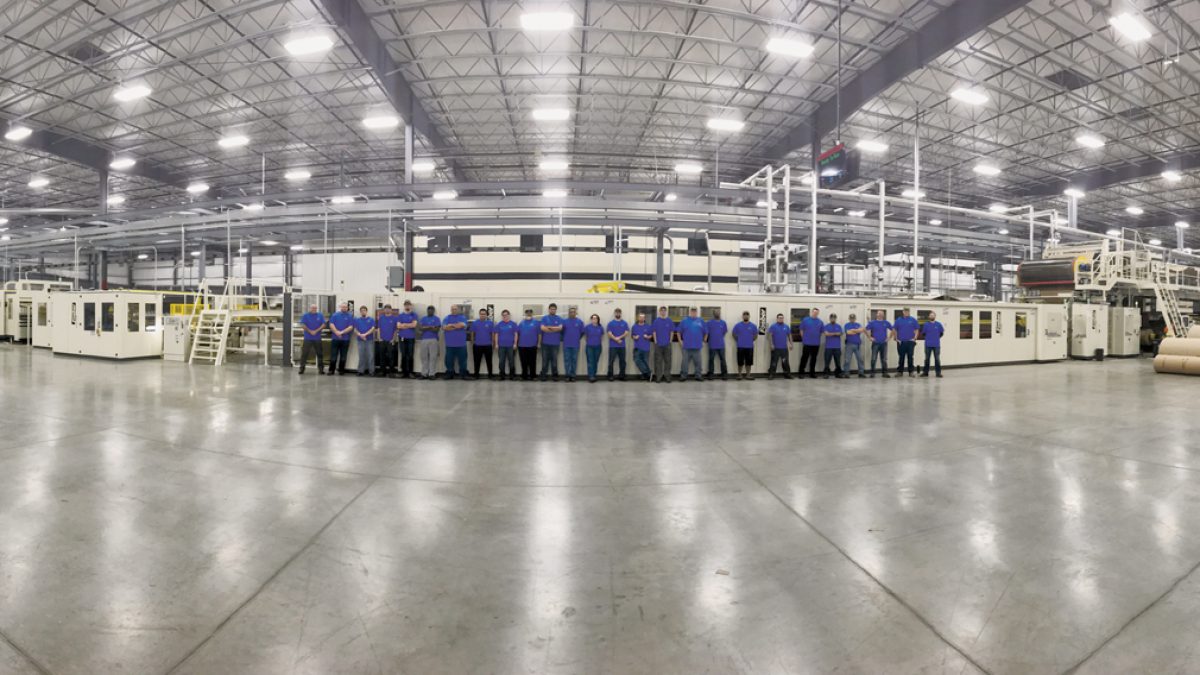 It has been more than 12 years since I last visited Welch Packaging. The changes between 2005 and 2017 are extraordinary. In 2005, the family-owned independent had six sheet plants in four states and employed 300 people. Today, there are seven manufacturing facilities and six distribution centers located throughout Indiana, Michigan, Ohio, Illinois, Kentucky and Tennessee. The combined operations employ more than 950 people.

The combination of organic growth and strategic acquisitions has positioned the Elkhart, IN based company as one of the largest independent corrugated manufacturers in the Midwest, serving more than 3000 customers. Since 1994, CEO Scott Welch has completed 20 acquisitions, almost one a year. The most recent was Northern Box Co., Inc., a sheet plant in Elkhart.

Welch acknowledges that more acquisitions are likely, however, he says he is not interested in expanding beyond the current geographic coverage and likes the synergies that the close proximity offers. Most of the plants are between 100-150 miles apart. “We like the footprint we’re in and it’s easy to get around to the plants and the staff can help each other,” he says. “Everybody has a sister they can lean on if they get busy or something happens.”

Welch Packaging’s compounded annual growth rate for the last 31 years is around 22.9%. “I don’t aspire for that type of growth but if an opportunity presents itself you execute on that,” Welch says. “Some years you’re going to have bigger years than others, but outpacing yourself with growth doesn’t do you any good. The biggest challenge we all have is people. If you can’t grow your people as fast as you can grow your business, what good is it?

“Fortunately for us we’ve been designed for growth. That’s been part of our plan for a long time so we may be better adjusted or suited for it than other companies,” he says.

A Different Approach
Growth was certainly incorporated into the Elkhart blueprint. The headquarters operation has been expanded into three separate manufacturing operations that include a sheet plant, a graphics plant and a corrugator plant, located in two connected buildings. A recent 195,000-sq-ft expansion was completed last year for the installation of the new 110-inch Fosber full line corrugator. The corrugator marks a significant milestone in Welch Packaging’s 32-year history, ensuring a steady supply of sheets, reduced lead times and more varied board grades and paper combinations.

Welch was a long-time customer of Corrugated Supplies Co. (CSC), and speaks highly of the partnership he has had with CEO John Potocsnak. “John has been phenomenal since we started up. He has offered his support and assistance,” Welch says. That partnership continues with CSC supplying some of Welch Packaging’s box plants.

The corrugator was the next logical progression in the company’s growth, and Welch says it indulges his competitive drive. “I’m very niche oriented. I like to do things differently. John runs an outstanding operation, but he’s focused on core grades and a set number of widths. He has a model that makes money. We want to come up with special board grades and experiment with different paper weights and differentiate ourselves though paper technology,” Welch says.

Welch Packaging ran its first sheet off the corrugator on Nov. 14. The corrugator runs A-, B-, C- and E-flute at 1200 ft per minute. It has almost every product available from Fosber, including Smart 400 singlefacers, Link 400 splicers, M2 400 automatic roll stands, ThermoStack 400 Pre-Heater and Fosber’s Synchro control system.

General Manager Mike Kelly says the Synchro system supports Welch Packaging’s objective to offer different paper combinations. It continually monitors and controls all the associated process data, such as paper temperatures, moisture levels, steam pressure, glue gaps the specific paper roll IDs, shoe pressures, paper tensions and wrap arm positions. “We look at the different paper substrates that we want to run and then we’ll determine what the recipe is going to be in terms of temperature, starch application and so forth and its repeatable,” Kelly says.

“Scott didn’t take any short cuts. He bought a fully equipped line so he could run just about any type of board,” Jeff Pallini, President of Fosber America, says. “He left space for future add-ons if needed. As an independent he understands the importance to respond to whatever the market needs are and he really positioned himself well.”

Celebrating the corrugator startup are, from left, Chris Croker, Kim and Scott Welch, Mike Kelly, and Lindsay and Brock Welch.

A True Partnership
Welch has nothing but praise for his team, which was lead by Kelly and Chris Croker, VP of Operations. He also speaks highly of the Fosber organization and Jeff Pallini. “I really connected with Jeff and Fosber has delivered on everything. Their support through this has been really strong so we’ve had no concerns at all.

“Fosber has been a great partner and the machine is running great board,” he adds. “Everybody I talked to spoke highly of the Fosber service model. And then when I met Jeff, I liked how he ran their business. That’s important to me. At the end of the day, when you need something, you better be working with someone you can trust and can count on. He presented himself and has delivered that. Those key relationships are important. It’s an integration of two businesses.”

Welch admits to being “apprehensive” about installing a corrugator. There have been a few challenges since startup, mainly due to logistics and adjusting to the constant flow of sheets to the box plant.

The new corrugator features a dual discharge, which sends sheets to the box plant on one side and the shipping dock on the other side of the building. “John (Potocsnak) thought he was going to see a huge drop-off in volume but it’s much more gradual as we’re trying to get those bugs worked out,” Welch says, adding, “Starting up the corrugator was the easiest part. All the handling in the box plant has been our biggest challenge.”

In addition, the company is dealing with a truck driver shortage, which is affecting the ability to deliver sheets to the other plants. The streamlined setup between the corrugator and the box plant ensures continuous flow of raw materials. “We get more volume per square foot of production than anybody,” Welch says. “Were running $55 million of business through the 160,000-sq-ft box plant. The addition of the graphics plant expands that.”

The Secret Sauce
Having state-of-the-art equipment gives Welch the tools to offer customers an assortment of solutions. “I don’t just want to be in the box business. It’s a $30 billion industry and there’s a lot of opportunity,” he says. “It’s easy to sell boxes. We’re more definitive on who and what we want to sell. We are incredibly disciplined on customer selection. It starts there.”

He says that is one of the ingredients in his “secret sauce.” Another ingredient is committed and creative employees. “I tell my kids that when you’re making people selections, there’s a lot of talent in the world but talent is not as hard to find as someone who can combine talent with grit and dependability.” One person who comes to mind is Dave Miller, Operations Manager. He and Welch attended high school together. “Dave has worked here 31 years and never missed a day of work,” Welch says. “We’d never be where we’re at today without guys like Dave. I look at our team and the many people who have blessed me over the years, I can count on them and trust them.”

Be sure to read the full feature in the March/April issue of Corrugated Today!