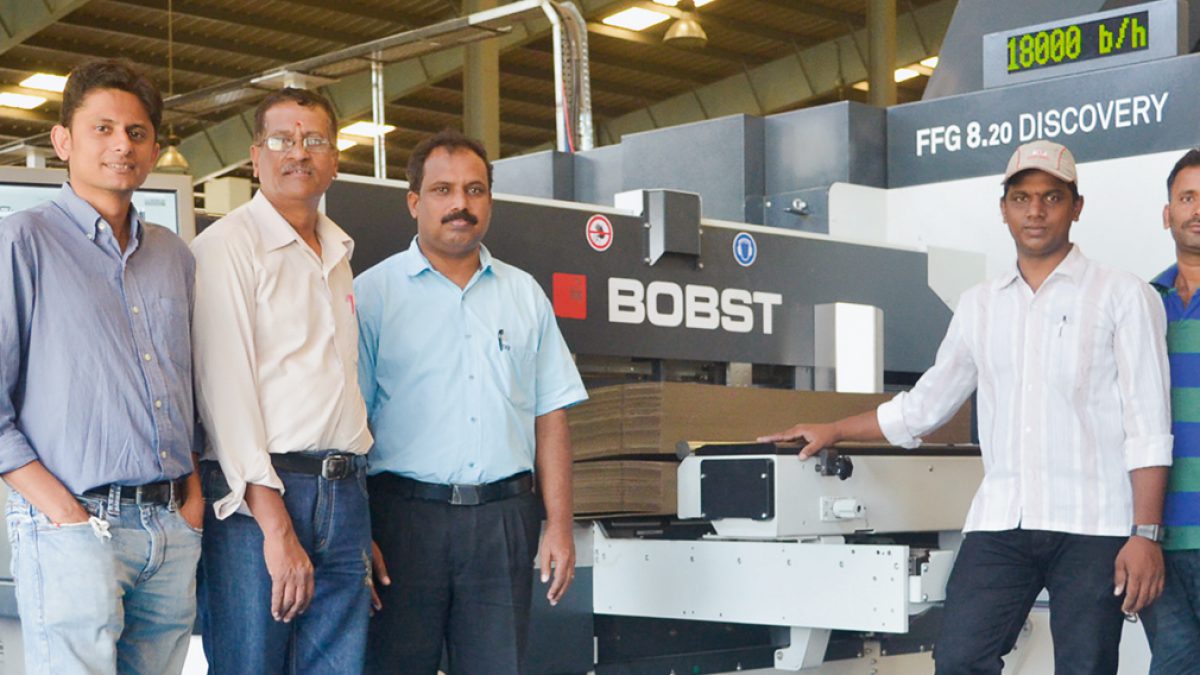 The Printing & Packaging Division of South India Paper Mills has achieved a record for corrugated box production during a single shift with a Bobst 8.20 Discovery flexo folder gluer. The machine completed 106,113 corrugated boxes in eight hours on 19 September 2017, a record made even more remarkable because this involved five separate jobs which had to be set up and changed.

“The average of 13,264 boxes per hour includes the set-up and cleaning time during the shift,” says Pratik Patel, Manager – Marketing and Product Development at SIPM Printing & Packaging Division.

This was almost a normal day at the factory, he says. “We have been producing around 75,000 to 85,000 boxes for most of the shifts.” The record-breaking shift involved a fortuitous combination of jobs and customer requirements, he explains. “There were in total five job changes performed in this particular shift. One of the jobs was two-colour and the rest were single-colour jobs. In particular, one of the jobs was a beer box, which is made with a lightweight B-flute. This kind of job adds more value to us as well as our customers if processed at the fastest speeds with maximum accuracy, so that it runs flawlessly in the fast case erecting and filling lines at the customer’s end.”

South India Paper Mills was founded 59 years ago and is based in Nanjangud, close to the historic city of Mysore. Its Printing & Packaging Division (shortened to SIPM-PPD) was founded in 2007/8 to specialise in corrugated box making. It is situated near to the paper mill site on a 48.5 hectare plot. The main production takes place in a single-storey 16,000 sqm factory. The paper mill and the SIPM-PPD factory share an advanced power generation system, with a newly installed 50 TPH (tons per hour) biomass boiler producing steam for a 12 MW power generator. This not only serves the electricity needs of the factories but allows about 3 – 4 MW to be exported to the state electricity grid.

SIPM-PPD is a strategic supplier to multi-nationals including GSK, RB, Britannia, ITC, UB, USL, RSIL, Adani Wilmer, Nestlé, American Power Conversion, Unilever, Coca Cola and others. Patel says, “We have a much diversified portfolio. Our boxes are supplied to various industry segments such as food, beverages, alcohol and spirits, edible oils, copier paper, fresh agricultural produce, white goods, automobiles, footwear, textiles and many others.” Most deliveries are within a 250 to 300 km radius, though some special orders may go up to 1,000 km away within India.

In total, the division employs 97 people in production, maintenance, sales and administration. It has certification for ISO 9001:2008, FSC and an SGS Social Compliance Audit. It operates a state-of-the-art 1.8m BP Agnati corrugator and also has a range of converting machines from several manufacturers, handling flexo and litho printing, die-cutting, gluing and litho-laminating.

The 8.20 Discovery was installed earlier in 2017 and is the company’s first Bobst machine. It was supplied by Bobst India. It takes sheets up to 2,180 mm wide and has four flexo colour units. It is run inline with a Mosca strapper/palletiser. Running at full speed, it can produce up to 300 boxes per minute (18,000 per hour) on coated/uncoated board with white or kraft liners of all types.

“We have a range of single-colour, two, three and a few four-colour jobs,” explains Patel. “The Bobst machine is intended to be effectively used in changing many single or two-colour orders, to cater for a wide range of segments with a just-in-time supply concept. This ensures the best use of available resources to retain a competitive edge in the market.”

The operating crew on for the record-breaking production shift were BM Jagadish and HK Santosh. “To hold a record for producing good quality boxes can never be an accident,” say Patel. “Neither can it be an effort only of the operating crew. The first thing that comes to all of our minds while running the machine at the fastest speeds is a feeling that we are walking on the path and vision given by our Managing Director, Manish Patel. We have an opportunity to show our skills and planning abilities under the constant guidance of our top management. But surely for that day, all credit goes to the supervisory team and the operators Mr Jagadish and Mr Santosh.”

In the future, SIPM-PPD has ambitions to increase productivity on its 8.20 Discovery still further, says Patel. “Our next target on this machine is 120,000 boxes in an eight hour shift, which is 15,000 boxes an hour.” The company is pleased with the performance of its Discovery, he says. “This is our first Bobst machine. If it continues to perform the same way with accurate, dependable quality and with optimum running costs, then surely we will have future machines from Bobst on our wish list.”