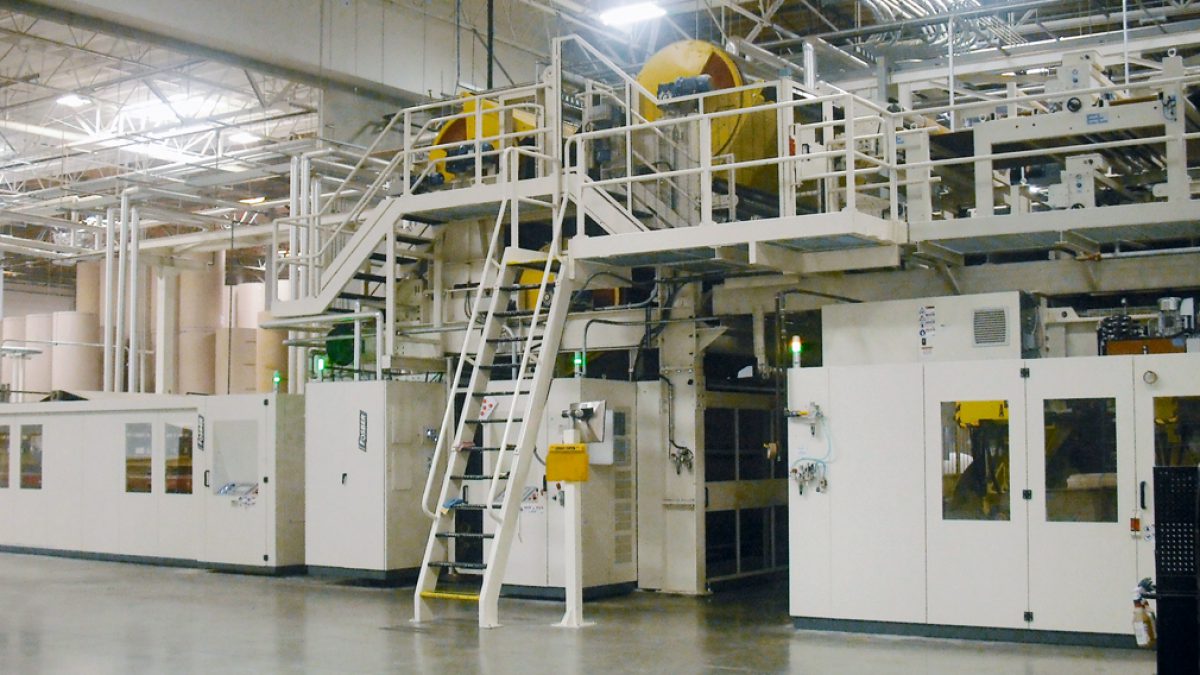 Commencement Bay Corrugated (CBC) is a full service box manufacturer located in Orting, Wash., about 40 miles south of Seattle. The 320,000-sq-ft facility produces just over a billion sq ft annually of boxes and sheets for the Western U.S. The company specializes in high-graphics up to six colors as well as heavy-duty and industrial boxes for the fresh produce, processed foods, meat, fish, and beverage industries.

Earlier this year, CBC started up a new 110-inch Fosber 1500 series corrugator. It replaced a 98-inch machine that had been installed in 1985 and was upgraded over the years with components from several different suppliers. 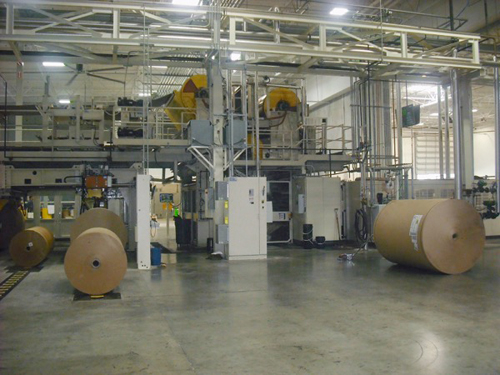 “Our company has grown a lot in the last 10 years. We were at capacity with the older corrugator so it was limiting our growth,” Matt P. Nagy, CBC Operations Manager, says. “By installing a new corrugator we have an opportunity to grow the company and provide quicker response to our customers for sheets and boxes.”

About 40% of the sheets coming off the corrugator are shipped to CBC sheet plant customers in the Pacific Northwest. “This investment allows us to service that market better with better response times. We’ve seen a greater than 50% increase in productivity,” Nagy says. “We’ve basically eliminated the bottleneck that is the corrugator so we’re able to balance the flow through the plant better and schedule our machines the way we want to through converting.”

Fosber’s 1500 series corrugator is considered its flagship machine, designed for high performance and productivity, running at 1500 lineal ft per minute. CBC is the first installation in North America.

The older corrugator had a Fosber dry end and singlefacer. “We had a very positive experience with them,” Nagy says. “They’re a world class organization, and the service and support is the best in the industry in our opinion and really sets them apart.”

The new corrugator has several key components, such as Fosber’s Link-M3 integrated roll stand splicers and the Syncro process control system, which are ideal for CBC’s mix of business. The Syncro control manages, synchronizes and controls the complete corrugator line from a single position, providing detailed production and process reporting, adjusting for warp, reducing waste and providing optimum sheet and stack quality. The system is tied into the plant’s CTI (EFI) corrugator scheduling system.

“With the speed and number of roll changes, CBC needed a supervisory system that is very accurate,” Paul Hrubesky, Vice President of Fosber America, says. “Waste can be made very fast at 1500 feet a minute so they can rely on this system to control the process.”

For safe and quick paper roll changes, Fosber designed the Link-M3 system, whose roll change cycle time is 70% less than conventional systems. Rolls are loaded and discharged from the dry-end side of the machine. The three-roll handling system includes two inboard lanes and a center lane for the discharge of butt rolls.

The corrugator is equipped with the Smart “Extended Nip” singlefacer for running very light to very heavy substrates. CBC runs C-, B-, E- and T-flute and averages 40-50 paper changes a shift.

“The machine does a really nice job with short run wet-end changes, which is very important for us because we run a lot of different board grades and specialty grades and short and medium sized runs,” Nagy says, adding that run speed is equally important. “With all the grades we run, there are some combinations we expect to run at top speeds. The ability to be able to run doublewall, mid weights and heavyweights at over 1000 fpm is really just as important or more important for us with our order mix.”

The ability to better control corrugator temperatures and tension control allows for higher speeds when running doublewall and heavyweights, which Nagy says makes up a significant portion of the overall mix. “The machine does a great job giving us the ability to control that heat when you need it and run cooler when you don’t need it as you’re changing between board grades.”

Hrubesky says the corrugator has a 53-inch quad stack, rather than the traditional 43-inch, which extends the dwell time for better heat transfer. “You’re trying to keep that paper at the same temperature,” he explains. “Even though you’re running faster, you need a larger contact area or more contact on the heated vessel and that’s what is provided by going to a 53-inch pre-heater.”

To facilitate the increased speeds across the dry-end, Fosber developed a patented hydrostatic bearing knife bar that requires no lubrication. The slitter is also lube-less so there is no possibility of oil contaminating the board, which is important when running jobs for food packaging. 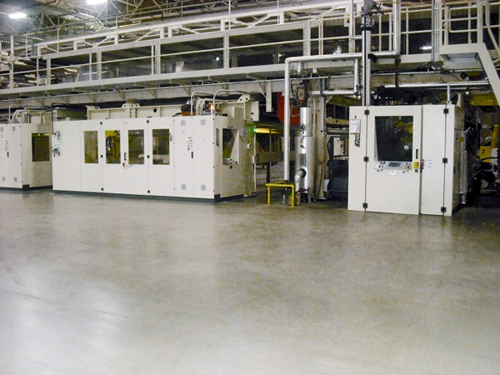 CBC’s corrugator has the Pro/Care suite of controls that offers enhanced features for on-line predictive diagnostics and preventative maintenance based on the actual production run. According to Hrubesky, it keeps track of all the settings. “If they get a jam-up or a bearing is failing, it will draw more amps and Fosber America’s technical group will get a signal so that we can notify the customer,” he says. “If it’s not addressed we will get another notification. It’s a maintenance system that is monitored externally.”

Pro/Quality is a defect detection and monitoring system that is installed at each single facer to monitor the web immediately, at source, as it exits the machine just prior to the take-up conveyor. Utilizing vision techniques and technologies, Pro/Quality monitors, detects and records in real-time any defects across the full web width with 100 percent coverage.

It detects all web surface defects such as paper defects, as well as any 3D defects such as delamination, bubbles, blistering, folds, wrinkles, tears, splice joints, flute crush or edge defects. Thanks to its integration with Syncro, Pro/Quality automatically tracks and ejects any detected waste sheets from the corrugator at the waste diverter located immediately after the cut-off knife.

In addition, CBC purchased Fosber’s maintenance program. Fosber’s human resource department hired a technician from the Orting, Wash., area six months prior to the installation who was trained on Fosber corrugators installed around the country. At the end of six months the technician is leased back to CBC for two years at a monthly fee, which includes the spare parts. Oftentimes, Hrubesky says the plant hires that person full-time at the end of the two years. 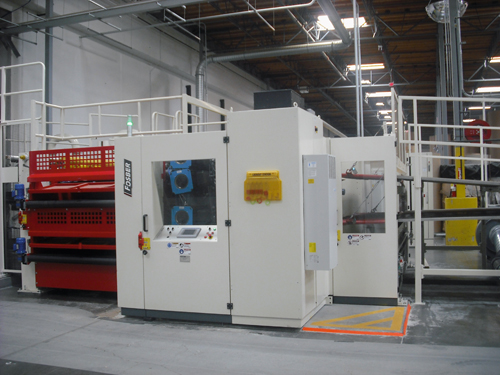 Concurrent with the corrugator installation, a new conveyor system was installed by C&M Conveyor. “They did a very nice job. It’s a nice system,” Nagy says.

Other investments included a Ringwood starch kitchen and a Kadant steam system. Adhesives are supplied by HarperLove.

During installation CBC ran both corrugators side by side to ensure order delivery. “We had the new corrugator and the old corrugator operational for about a week before pulling out the old corrugator,” Nagy says. “We’ve got a good crew who have a lot of experience. They’re a really knowledgeable team. We’ve come a long way since December and startup and our uptime is up significantly since then.”

The objective was to ramp up the 110-inch corrugator and remove the older corrugator very quickly to get the crew familiar with running the new machine, Hrubesky says. “Vertical startups are very critical and we did that at Matt’s plant. We hit a home run there where they didn’t have to rely on the older machine because they needed the space for the conveyor.”

Nagy says the installation went well. “Fosber is a great partner. They’re a lot like us from the fact that their team cares and they’re knowledgeable and they are always looking for ways to improve. It was a big startup. There was a lot to work through, but their team did an excellent job. 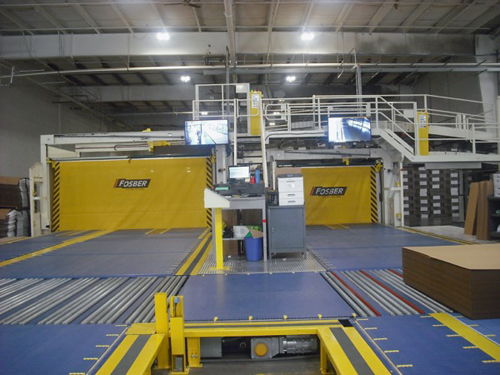