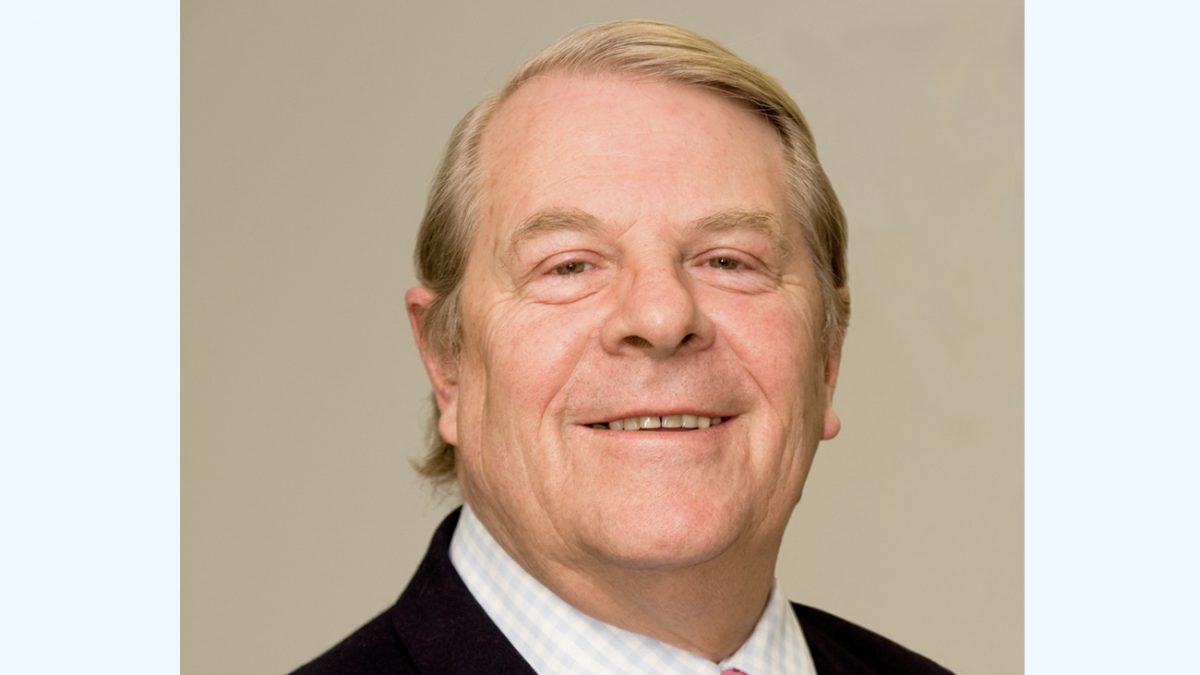 It is with the deepest regret that we inform of the death of Michael Brunton. He suffered a massive stroke and sadly never recovered. He passed away on Wednesday, 3rd March 2021. He was 73 years old.

Michael was born in Farnham, Surrey on 21st March, 1947. He was the eldest child of David and Margaret Brunton and he was born in the house built by his grandfather. Being born into a military family, Michael’s global ‘travels’ began from an early age. He accompanied the family to Ankara, Turkey, at the age of five, where his father had accepted a military advisor’s role for two years. By the age of seven he was fluent in Turkish. The next move came as Michael was about to turn eight, when his father was posted to Osnabrück in Germany.

Michael and his younger brother Tony, were sent to boarding school in England from an early age and were looked after by their grandmother in Farnham during short school breaks. Fortunately for them and their younger sister Chrissie, Major Brunton was posted back to the UK, where the family were based in Catterick and then Tidworth, giving the family a chance to spend some time in the UK. Schooling was undertaken at Yateley Manor, but Michael’s interest was never in the class room, more on the sports field, playing football to a very high level, as well as gymnastics and diving. He was crowned Under 21 High Board Diving Champion for the South of England when he was only 16, training alongside Brian Phelps, the Olympic and Commonwealth champion.

Army life was in his blood! In 1968, Michael was Commissioned at the Royal Military Academy Sandhurst as an Officer into The 3rd Carabiniers (Prince of Wales Dragoon Guards), following in the footsteps of his father. He had tours of duty in Cyprus, Libya, Germany and the UK, before leaving the army in 1971 at the time of the amalgamation of his regiment, The 3rd Carabiniers with the Royal Scots Greys.

Prior to concluding his Short Service Commission in the Army, Michael was introduced to Fiona Binsted by his sister Chrissie. Their romance was instant, with Michael proposing to Fiona on her 18th birthday and they were married a year later at Binsted church in September 1970. To repay the ‘favour’, Chrissie went on to meet Tony Heslop, a brother Officer of Michael’s in the 3rd Carabiniers and subsequently marrying! And the romance continued, with Fiona’s older sister, Sara, being introduced to another of Michael’s best friends in the Army, Colin Neville and they went on to marry as well. 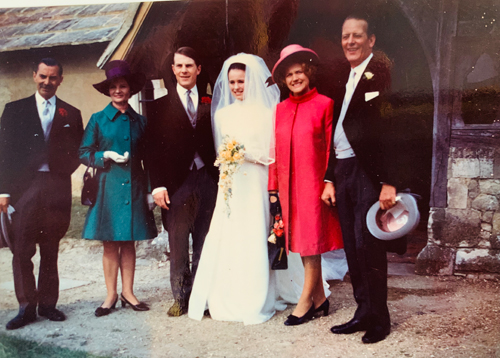 Within three years, Michael and Fiona welcomed their first son, Daniel, in 1973, followed in 1977 by Benjamin. Michael and Fiona were married for 50 years, celebrating their Golden Anniversary in September 2020, but due to COVID lock-down, were unable to celebrate in a style befitting them both.

Having left the Army in 1971, Michael was encouraged to join Fiona’s family publishing business, Binsted Publications. He worked under Major Ken Binsted, learning the art of producing trade magazines in the wine and beverage industry, then cutting his teeth in the packaging industry by selling advertising in ‘International Paper Board Industry’. In 1977, Michael asked Major Binsted if he could launch a new title to cover the carton business, which they went on to call ‘Folding Carton Industry’. Michael worked successfully alongside Fiona’s brother Ed and his wife Jan for many years, before setting up Brunton Publications in 1988. 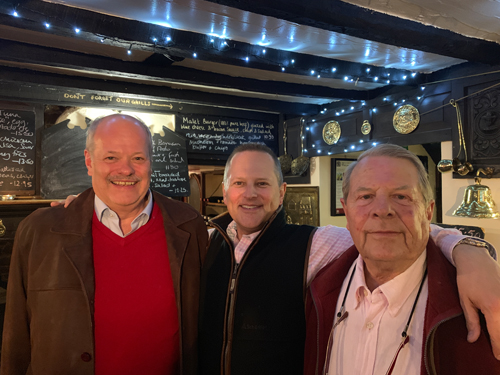 Ed Binsted, with Dan and Mike Brunton, not long before the first UK lock-down in early 2020.

Michael always loved visiting box plants and carton factories, talking to owners and managers and understanding how the industry ticked. He was never satisfied until he had asked every last question he could possibly think of. He was also keen to learn about new developments and the advent of flexo printing on corrugated board gave him the chance to tour the world, talking at conferences for FEFCO, TAPPI and AICC. Although he had never printed one single box in his life, audiences listened and took note! He was an eloquent speaker and was a firm favourite on the speaking circuit during the 1980s and 1990s, including at Congress events held by ECMA. The Torquay Corrugated Conferences, which ran for over 20 years, are still talked about even to this day. Good content, great atmosphere, industry support…..and awfully late nights at the bar.

He also broadened the reach of the business, when he formed a publishing alliance in North America with Ted Vilardi in the late 1980s. Michael formed a close bond with Ted, and was delighted when Tom Vilardi joined his father in the business. They became an industry powerhouse in North America, forging strong and life-long friendships with converters and suppliers alike.

He developed the business to become a complete service provider, from written word, through design and repro, then into the printing factory. He applied principles he had seen in the packaging world to his own little publishing empire, growing the Brunton ‘family’ to 50 people in the heady days. He was never happier than watching people excel in their jobs, encouraging them to be the best they could be. He wasn’t the boss; he was just part of a dynamic team. He was very much a man of the people and treated individuals on merit, not rank or title. This was obviously a trait from his formative years, as he was respected equally by soldiers as well as his brother officers. In business, he was just as happy making a cup of tea for the press-minders as being in negotiations in the board room.

Ever the innovator, Michael worked closely with Reed Exhibitions in launching the ‘Corrugated’ exhibitions, which ran successfully in 1994, 1998 and 2002. It was in 1994 that his eldest son, Daniel, joined the business. Together, they worked in partnership for the next 27 years, with Michael never actually retiring, reading his final page proof the night before he had the stroke.

“He was a great character and so knowledgeable on our industry, I always enjoyed being in his company. A sad day,” said Dermot Smurfit.

“Mike was one of the great characters of our industry and made an invaluable contribution towards its success, he was highly respected for his forthright views and analysis of the paper and packaging industry and those that were wise always listened to him,” said Peter Sangster, former Managing Director of SCA and owner of CRP. “We will miss his great sense of humour, his outspoken contribution to the industry and his friendship throughout my career.”

“Mike was most helpful in the early days as the then Reed and Smith Group pursued development into the corrugated industry (the precursor to DS Smith). He was known and respected far and wide in this industry for his knowledgeable contribution and commentary,” said Sandy Stratton, former Managing Director of St Regis Paper Co.

Over the years, Michael’s passion for excellence was most evident in other parts of his life outside the packaging world. Whether it was helping arrange a summer Ball to raise money for the local church or his boys’ prep school, or hosting people in his own home, Michael was never happier that when he had a glass of wine in one hand…and of course a Silk Cut in the other! He made people laugh, he made them comfortable and at ease – a rare skill indeed. 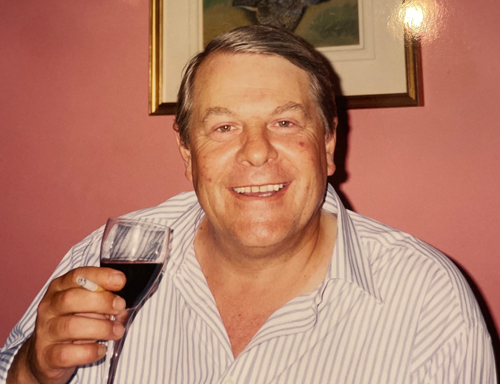 With his magazine called ‘Clay Shooting’, he and his youngest son, Ben, took the sport to the next level, arranging shooting competitions in the UK, Belgium, Russia and the U.S.A., the likes of which have never really been matched since. Crowning glory, though, was when Ben won the World FITASC Championships in 1999. He was so proud of what his son had achieved and took great delight in reporting it.

In the world of horse racing, Michael, with his brother Tony, sister-in-law Sue and eldest son, Dan, owned Clarendon Stud for 14 years, breeding training and racing Arabian racehorses. It was touching that the first horse they bred, which went on to win many races, was named Khanspur after the name of the house in which Michael was born. They went on to breed multiple Group winning horses, and sold horses to France and the Middle East, with progeny still racing with Clarendon bloodlines to this day. In his final seasons of breeding horses, Michael was announced leading breeder in the UK, testament to the planning and attention to detail of the team at Clarendon Stud. 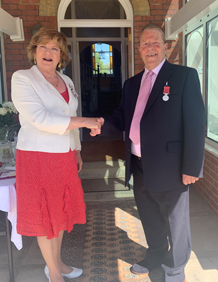 Closer to home, his work within the Parishes of Allington and Boscombe, tirelessly fundraising for the development of a wonderful new village hall, saw him awarded the British Empire Medal in the Queen’s birthday honours in 2020. His meticulous planning, negotiating skills and pursuit of excellence saw the community in which he and Fiona lived benefit from many wonderful summer events, band nights, BBQs and Bonfire celebrations, raising so much money for the local community and its play park, its church — and finally the village hall, which sadly, Michael never got to see officially open, as it is still about a month away from being finished. 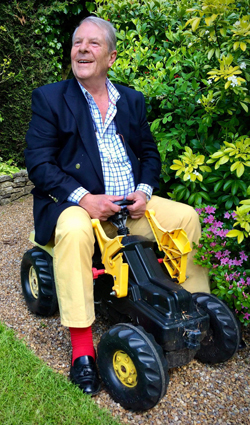 I have been touched by the kind words from Army friends, packaging industry heavyweights, clay shooting ‘royalty’, Arabian racing enthusiasts and dozens of people from Michael’s community — all of whom are shocked and saddened by his sudden passing. The COVID lock-down had not been kind to Mike and there is part of me that feels he was just missing his mates, frustrated by not being able to have a good party and not able to get out and about.

I have grown up for the last 27 years in the packaging industry, at Mike’s side, with Mum holding us on a steady course. I learned from the best. I strive to uphold his memory. I will miss him eternally. But as one industry friend told me, remember what Mark Twain said; “Good fathers not only tell us how to live, they show us.”

Your dear wife and family are heartbroken. People from all walks of life, from all over the world mourn your departure — you have left a massive, gaping hole. But I will always hold onto this; Mum, Ben and I got to call you our best friend. Rest easy, Dad.