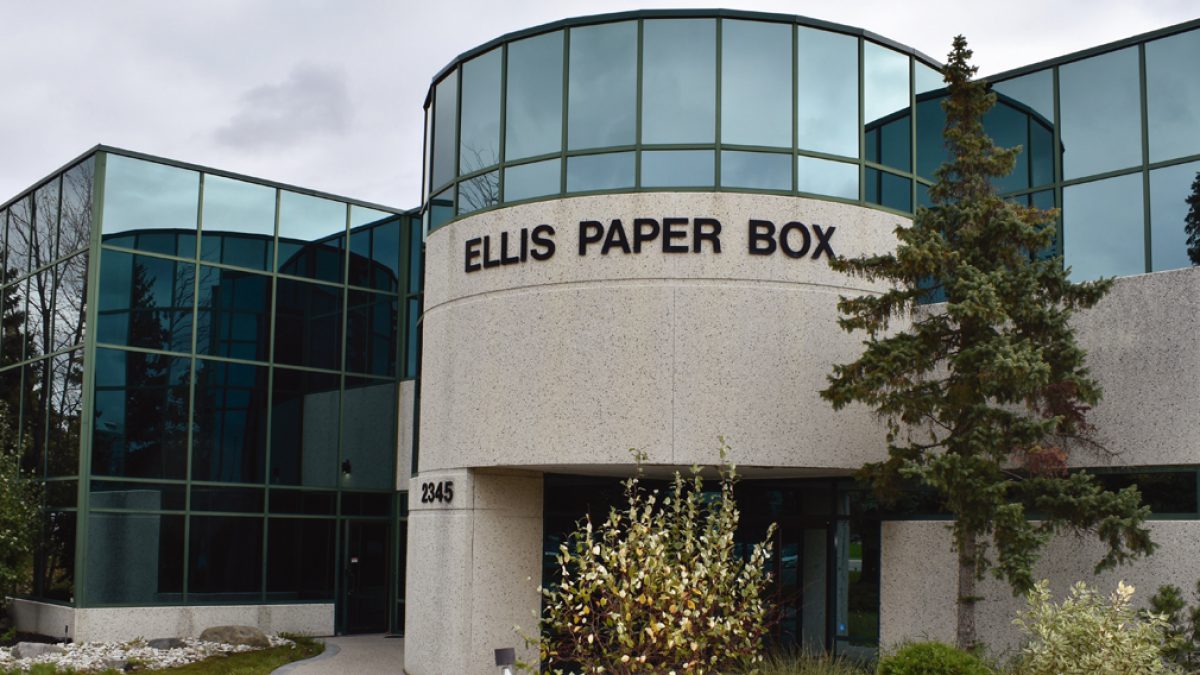 Major Investments at The Ellis Group

The Ellis Group is one of the largest privately-held folding carton manufacturers in Canada. The company’s roots date back to 1946 when it was known as Holway Paper Box. Redpath Industries, a Canadian sugar refining company, acquired Holway in 1976 to manufacture the sugar cube boxes. Bill Ellis was general manager at the time and saw opportunities beyond sugar cube boxes so in 1983 he purchased Holway and renamed the company.

Today, Bill Ellis’ children Cathie and Dave Ellis run the company. The Ellis Group serves a wide variety of industries from three different locations in Mississauga, Pickering and Guelph, Ontario. Each facility has its own specialty.

Cathie Ellis is President of Ellis Packaging in Pickering. The facility is considered the headquarters office and specializes in folding cartons for the food, confectionary, liquor, personal care and pharmaceutical industries. The 85,000-sq-ft facility has two new eight-color Komori Lithrone GLX presses and a 10-color Primographic web-fed hybrid flexo/litho press.

The Guelph plant, known as “Ellis Packaging West,” serves the food and confectionary markets and is run by John Clarke. The plant has six- and seven-color offset presses, including a new seven-color Komori GLX40, and offers customers a variety of value-added processes, such as foil stamping, cello windowing, produce tray forming and specialty beverage carriers.

Eliis Paper Box, located in the Toronto suburb of Mississauga, is run by Dave Ellis and produces primarily pharmaceutical cartons. The 60,000-sq-ft plant has a new Komori Lithrone GL40 eight-color offset press with an Eco-Eagle Cold Foil/Cast and Cure system. The plant offers 100 percent in-line inspection of pharmaceutical packaging with three-phase electronic verification. The state-of-the-art technology includes LearyView Print vision, Eye-C Proofrunner and GlobalVision ScanProof systems. “It’s hard to get past any portion of our manufacturing without an inspection taking place. We print over 20 languages out of this facility alone, maybe upwards of 30,” Dave says. “The vision system guarantees us the quality without us having to do it manually.” Ellis Paper Box also provides the cutting dies for the entire group. Its in-house die making operation has a Gerber Profile die tool system.

Combined, the three locations offer customers a one-stop shop for engineering, design, production and distribution. Dave Ellis says there are definite advantages to having the three plants, such as the ability to provide shorter lead times, specialized service and redundancy. “We have a lot of flexibility and can move work around,” he says, adding that customer service and speed to market is key. “We’ll take orders that are 2,000 or 2,000,000. It’s all part of the bigger picture of servicing our customer. We have made great inroads with Fortune 100-type companies. They like doing business with us because of the service levels and because of our philosophy of helping them.”

“What differentiates our company is the ability to service our customer really well,” Cathie Ellis adds. “There is not a day that goes by where we don’t get jobs from existing customers and new customers looking for very short turnarounds.”

Several years ago The Ellis Group began a major reinvestment program, decommissioning older equipment and installing newer state-off-the-art printing, gluing and diecutting technology. Just in the last three years, investments have totaled about $15 million. Part of that investment included the three new Komori presses for each facility. With their rated speed of 18,000 sheets per hour, the new presses greatly increased productivity and prompted the need for newer automated high-speed platen diecutters.

The Optima 106 offers operator friendly controls, ease of handling and the ability to diecut a variety of substrates, including paper, plastic, board and corrugated material up to 1.5mm. Its versatility makes it a popular choice for folding carton converters.

The diecutters are manufactured in Barcelona. Koenig & Bauer North America services the machines and supplies parts from its headquarters in Dallas, Texas. “Iberica was always a good diecutter, but now that KBA is branding and supporting it, that is fantastic because it allows us to get parts so much easier,” Dave Ellis says. “The staggering improvement is the service. When KBA purchased Iberica that made us feel really good about owning a lot of Ibericas and about our future moving forward and I think we’ve proven that by buying three of them.”

The Ellis Group has a total of six Iberica diecutters installed across all three facilities. Ellis Paper Box has two new identical machines. “The opportunity to marry up two identical diecutters was difficult to resist,” he says. “That was the selling feature to me. I love the flexibility that we can run any job on any diecutter now and use the same tooling.”

Running 8,000 sheets per hour, the diecutters have doubled diecutting and blanking production capabilities. “And our makereadies are a third faster,” he says. He has noticed many improvements in the design technology of the new diecutters, such as the push button automation, and subtle refinements in the gripper and feeder. “The feeder has always been an important part of the diecutter if you want to hit those speeds,” he says. “We’re running different substrates all the time. Most feeders will run 15 pt SBS quite well, but switch that up to an N-flute or even a recycled stock and you’re in trouble. We maybe wouldn’t get the speeds we wanted in the past but today we get much better speed with the new feeder.”

The new grippers also help with throughput. Aleks Lajtman, Regional Sales Manager of Koenig & Bauer Canada, explains, “It’s the 75/25 rule of start stop so where competitive machines will be 100 percent on to zero (100/0, 100/0) that causes more nicks, slowing down the machine. Iberica does more of a 75 speed up, 25 slow down, and the numbers are proving themselves that we’re able to get the same job at a faster speed.”

Ellis says he has also noticed improvements in quality and registration. “You really see a big difference on jobs that have detailed embossing because that’s when you see the flaws, and we do a lot of embossing here for value-added products.”

All of the new diecutters have in-line blanking, which provides added labor savings. “We run a lot of small short run work in tandem, which gives us an opportunity to blank,” Ellis says. “We won’t be blanking every job, but we’ll use it where we can and as often as we can. Without the installation of the blanking equipment, we would probably have two more people in our stripping department, which is an area of extra cost without a lot of value. It really affects the bottom line these days. With new technology you can blank a job and you can get 7,500 sheets an hour and go straight to the gluer. It takes a whole process out of the mix. It’s something that we don’t even think about anymore because we blank so much work now it’s just a change in philosophy of folding cartons in general. People just don’t strip a whole lot anymore.”

At the Pickering plant the new Optima K replaced an older Iberica TRK. Don Smart, Plant Manager, says there are significant differences in the newer technology. “The Optima K is a lot smoother, and we can pull our QA sheets off the top of every load. In the past we could not do that so you would have to run 2,500 sheets and when the load exits the side of the press the operator would pull the diecut sheet and inspect it. Now we can pull out QA sheets on the fly more frequently and check more often and reduce waste.”

Space is an issue at the Pickering plant. “The quicker we can print, diecut, and glue and get jobs off the floor, the better,” he says. “The new printing press has contributed substantially to that goal and so has the new blanker.”

Cathie Ellis agrees. “There is less time in the marketplace to respond. We have to respond quickly so we need to lean on our equipment to react to tight deadlines.”

Although Bill Ellis, who is 76, has turned over operation of the company to Dave and Cathie, he likes to stop by now and then. Dave Ellis says his father knows almost all of the employees by name. “Every employee will say to me, ‘Your father is an amazing man.’ He knows almost every single employee at all three companies.”

On the conference room wall in the Mississauga plant are 10 “Team Commandments,” which Bill Ellis wrote. The first is: “Help each other be right, not wrong,” and the 10th is “Have Fun.” “That is usually the last thing he says to me before he hangs up the phone, ‘Alright, have fun,’” Ellis says. “My father took a situation where he saw an opportunity and took a chance. He took a risk and it has paid off. Many years later we are in this great manufacturing facility and employing 250 or so fantastic people.”