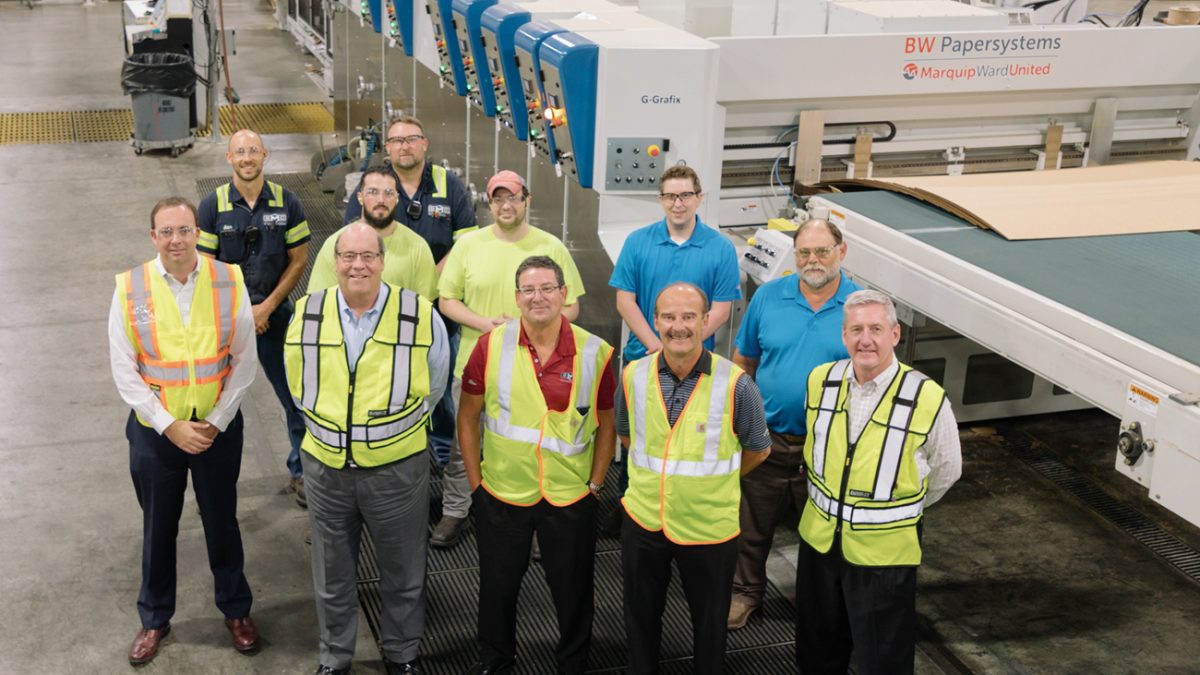 Southern Missouri Containers, Inc. (SMC Packaging Group) is completing the final phase of a major expansion and relocation of its Springfield, Mo. operation, consolidating six facilities into two buildings and adding several pieces of high-speed converting equipment. Springfield is the flagship location of SMC Packaging Group, a closely held and employee owned corrugated company with 500 total employees and 326 in Springfield. Since its founding in 1972 SMC has grown to four locations across the Midwest, in Kansas City and Springfield, Mo., Conway, Ark., and Tulsa, Okla.

Springfield has a diversified customer base serving food and beverage, light industrial, e-commerce, subscription services, retail, displays, automotive and other box plants and distributors. It has experienced significant growth over the years, nearly doubling sales volume in the last five years, prompting the need for more space. The company had occupied its 160,000-sq-ft N. Belcrest building since 1974. However, the addition of converting equipment and a 98-inch Fosber corrugator created space and production constraints to a point where machines had to be periodically shut down because there was no more room for WIP.

“We eventually expanded into other facilities for storage, design, and special finishing work. When we grew to six total facilities, we decided to consolidate,” says Mark McNay, Senior Vice President and General Manager.

“As an independent we follow a pretty typical pattern in that we focus on the needs of the customer and making the sale before we plan how we are going to service them and produce the items in the most efficient manner for the long haul,” Kevin Ausburn, Chairman and CEO, says. “In short, we want to make sure the business is profitable and sustainable before we make significant capital investments for the long term. Thus, we tend to operate in space that may be less than desirable with equipment that is pushed to its limits before we make the jump to the next level of capabilities.”

The two locations in Springfield – the original building at Belcrest Ave. and the new facility at Progress Place – are located about five miles apart. The new facility is 410,000 sq ft and sits on about 37 acres, allowing plenty of room for future expansion. Twenty dock doors, six rail dock doors, and two drive up ramps provide access to the building. There are eight machine centers, a maintenance shop, ink lab, sales and design center, and corporate office at this new location.

The Fosber corrugator, along with an LMC jumbo rotary die-cutter, Automatan laminator, flatbed die-cutter and specialty finishing and converting, remain at the Belcrest building. Rollstock storage and a finished goods warehouse have been moved to the new building.

“At some point we can build additional square footage and then put in a new corrugator so that the containerboard and corrugator will be in the same building,” McNay says. “But that’s a few years away.” 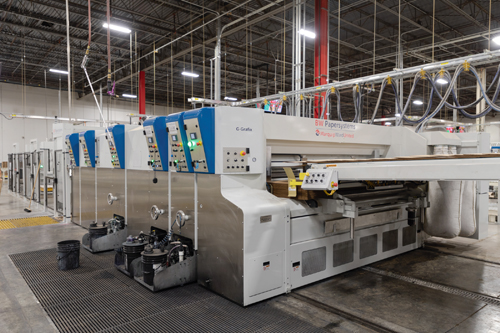 The relocation allowed for the addition of several new pieces of equipment, including a MarquipWardUnited 66- x 125-inch rotary die-cutter and a MarquipWardUnited 66- x 125-inch flexo folder-gluer, both with top and bottom print stations. The six-color diecutter has four bottom and two top print units with JB Machinery dryers, a stacker from A.G. Stacker, a Signode bundler and a pre-feeder, bundle breaker and load former from Alliance Machine Systems International. The three-color flexo folder-gluer has two bottom and one top print units with JB Machinery dryers, a Signode bundler and an Alliance pre-feeder and load former. Also new is a Bobst Expertfold specialty folder-gluer, a Signode GCU unitizer and an ink dispenser from Poteet Printing Systems. To accommodate the additional capacity, C&M Conveyor and CreAlutions extended the mainline conveyor. 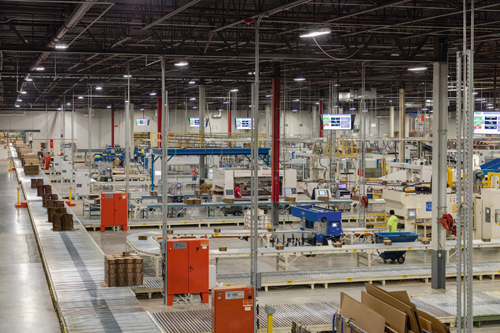 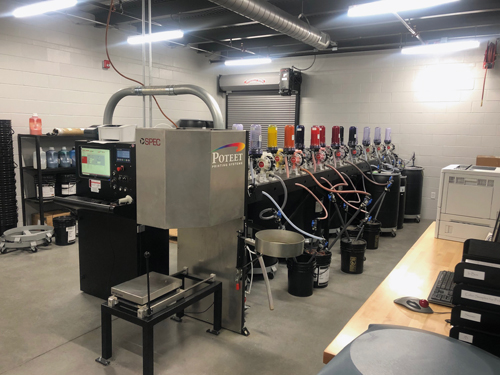 The Progress Place facility offered a blank canvas from a design perspective, allowing SMC to maximize throughput in the near-term, continue to grow in the mid-term, and plan for future facility expansion in the long-term.

“The expansion allowed us the opportunity to add converting equipment that we could not even consider due to space constraints prior to the Progress Place building,” Ausburn says. “All of this new equipment was visualized and positioned along with the legacy equipment we planned to move before the Progress Place building expansion plans were completed. We have the luxury of reserving space in our converting lineup for additional equipment that we may add at a future date.”

McNay says the consolidation and expansion are already paying off. “Alleviating the congestion we experienced in our Belcrest facility has allowed for increased converting and corrugator capacity. By enhancing our capabilities, we are able to respond to customer needs and surge demand. Our focus has always been the long-term, profitable growth of the company and as such we are focused on bottom line performance, and not so much top-line growth.”

He says the new equipment along with the addition of a new sales and design center is supporting market expansion. “We are already seeing the opportunities emerging in the inside/outside printing market for e-commerce and subscription services. With additional specialty folder-gluer capacity at each location, we have served these new markets with lock-bottom cartons, and  infold/outfold trays. We are able to convert  multi-out diecuts that run efficiently using the bundle breaker on our new Ward rotary diecutter.”

The sales and design center has Esko C64 and XP cutting tables and a small HP digital printer for prototyping. Customers can view structural and graphic designers at work through an open floor plan with lots of windows and ready-access to the corporate offices. Glass overhead doors to the plant continue the feeling of openness throughout the new facility. 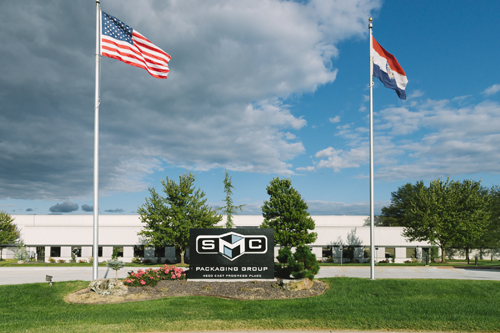 And Then Came COVID

This wasn’t the first time SMC has rearranged and relocated machines, but it was the largest undertaking. “The biggest challenge was the coordination of the relocation of two rotary diecutters and two flexo folder-gluers from our Belcrest location to our Progress Place location early in the process,” McNay says. “In each of these four relocations, strong local contractors and OEM partnerships allowed us to shut down on Friday and have the machine back up and running late on the following Tuesday. We were able to coordinate the move without customer disruption. The redundant capacity/capability we have in Kansas City and Conway helped us meet customer demand during these equipment moves.”

As if the move wasn’t challenging enough, SMC also had to deal with changes as a result of the global pandemic. “Like most box makers we have had to modify operating procedures due to COVID-19 to promote the health and safety of our employees that reduce our productivity and efficiency,” Ausburn says. “Even through this period of constrained effectiveness, we have experienced  the potential that awaits us when we can get back to running the business to our capabilities.”

“All in all we’ve managed COVID as well as we could have,” McNay says. “Our co-worker’s safety is most important and I think we’ve weathered it fairly well. We’ve been blessed with strong business and a lot of that has to do with the fact that our customer base is so diverse.

“Generally speaking the box business is pretty strong. I’m surprised that we’re as full as we are,” he adds. “We’re running 24/5 right now in the Progress Place location. The corrugator is running 24/5 and some finishing at Belcrest is running 18 hours a day, five days a week.”

Reflecting on the experience of relocating, Ausburn and McNay have a few words of advice for fellow box makers. “Be humble, and don’t bite off more than you can chew,” McNay says. “Utilize your supplier partners to provide the guidance you will most certainly need. These guys are the experts, and they can help you avoid the pitfalls that other converters have experienced.”

Ausburn adds: “Start the planning process long before you think you will need the space and change your mind often before committing capital. It is easier and less painful to change drawings on paper than digging up footings or moving equipment. Build more than you think you will need because you likely will need it sooner rather than later if you are focused on success.”

And perhaps most important, involve the employees, he says. “If they have ownership in the project your chance of success is greatly enhanced. Since we are an ESOP company, we try very hard to be transparent with our employee owners when it comes to sharing financial information on the company and what our plans are for the future. We are also very big on incentive compensation. If the company does well all employees share in the success.”

Ausburn attributes SMC’s success in part to membership in AICC, The Independent Packaging Association of which he is a Director At Large. “We have been members of AICC since the mid 1970’s and value the knowledge we have gained and the relationships that we have developed from our involvement.  What we have learned about the box business if not gained on the job, was learned through the AICC.

“We will celebrate our 50th anniversary in business next year and have many customers, vendors, employees, and other friends to thank for this longevity,” he adds. “You would think that after all this time we would have most things about the box business figured out. However, not a day goes by that we do not learn something new or that we are not surprised by something that happens for the first time.” 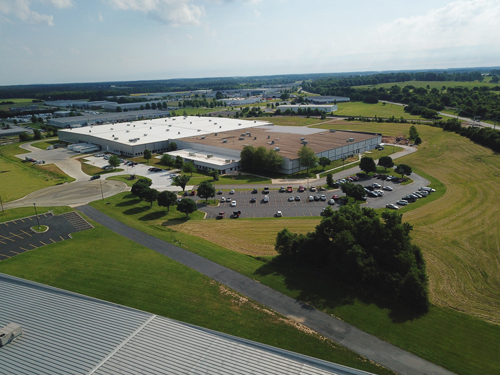