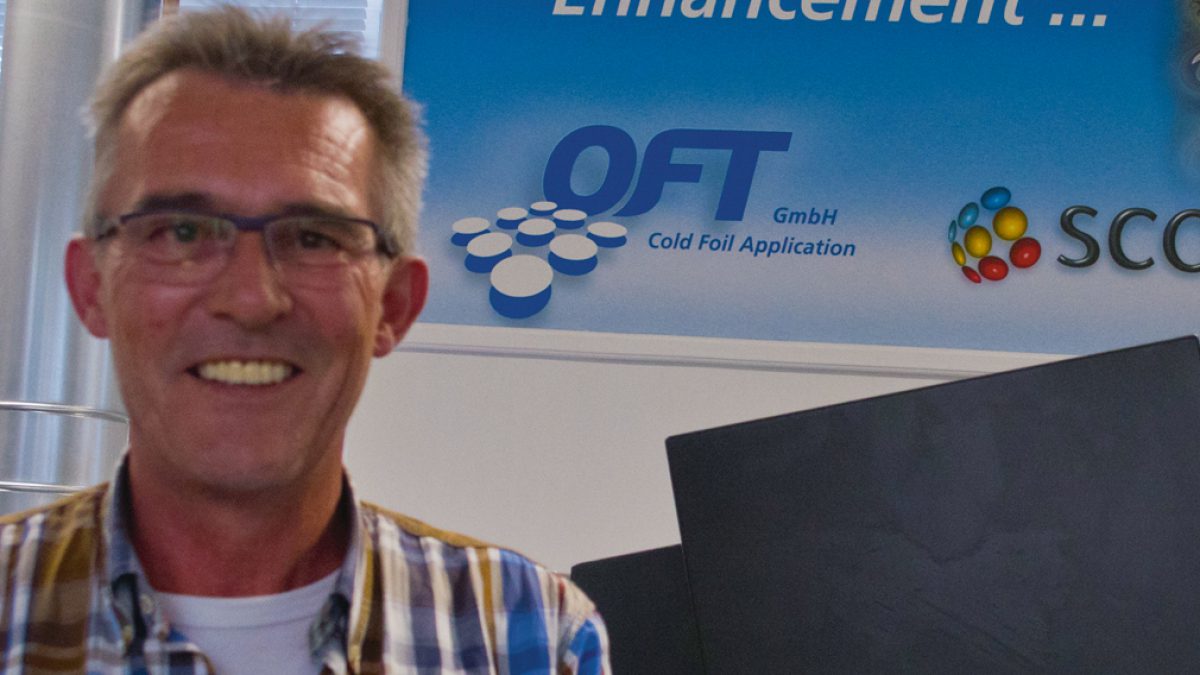 Originally trading as Lappe GmbH, it was not until 1997 that Stephanie Köch and Thomas Glasder were offered the opportunity to acquire the business by way of MBO, as the previous owner had no children or succession plan. Taking on a hefty loan from a local bank, Ms Köch and Mr Glasder – both of whom had worked for the business for over a decade each – went about establishing the company as one of the leading print enhancement trade houses in the industry.

With continuing investment in state of the art machinery and the dedication of the workforce that came with them, Ms Köch and Mr Glasder saw the business grow from seven people to 18 people and today, they generate a little over €3.5 million in sales. Based from a 5,000 sqm facility in Neuss, not far from Dusseldorf, Die Druckveredelung Köch & Glasder GmbH handles hot and cold foiling for printers and converters across Europe and Scandinavia. Around 80 per cent of the work undertaken in for folding carton converters.

The company has always used the best equipment. Throughout its history, the business has relied heavily on Bobst for the supply of hot foil presses. “When we took over the business, we were operating one Bobst hot foil press and a couple of cylinders,” explains Mr Glasder. “We then added another Bobst hot foil press in 1998, followed by another in 2001 and then the fourth machine in 2005. I guess one of the turning points for us was in 2011, when we consolidated our production capacity by taking out two hot foilers and installing the first ever Bobst Masterfoil 106PR. It was a real game changer for us,” he recounts.

As well as the hot foiling equipment, Köch & Glasder installed a KBA Rapida 105, specifically for UV coating, cast & cure and cold foiling unit. “This was an important step for us,” explains Mr Glasder. “Adding cold foil to our production capabilities allowed us to expand our market significantly.”

And it was shortly after they had installed the press that Mr Glasder had a chance meeting with Tim Self of Compact Foilers. “I met Tim at Drupa in 2008, only a few months after we had installed the KBA press. I got to know their capabilities and asked if they would consider making a cold foil unit for my press; within two years, they had designed and installed their first cold foil applicator on my press. Our relationship since then has been wonderful.”

First in the world
Being no stranger to installing worldwide firsts, Köch & Glasder had no hesitation in being the first plant in the world to opt for the Scodix Ultra Pro, specifically for digital print enhancement. “We first met Scodix at Ipex in London back in 2014,” explains Mr Glasder. “We really weren’t that sure if digital enhancement was the way forward, but the more we thought about it, the more we liked the idea. I knew that to give the ultimate in finishes, it needed cold foil too and I had no hesitation in getting Tim Self and his team at Compact Foilers to sit down with Scodix to see if they could develop a unit to go in-line with the machine. It paid off, as within a year, we took delivery of the Scodix Ultra Pro, with in-line CF 75 Ultra cold foil unit. The work we do on this machine is second to none, proved by the fact we welcomed well over 500 people through our facility over the course of drupa in June. The feedback to Scodix and Compact Foilers after the visits has been fantastic.”

Fairytale ending
“People often ask me why we have a frog with a crown in our logo,” says Mr Glasder. “Within a few years of completing the MBO, Stefanie and I decided the time was right to change the company name to reflect our ownership. We wanted a new logo and our designer was given a brief to try and find something that would reflect our care for the environment. Just outside our factory is a small pond and during the spring and summer, the noise of the frogs is noticeable, so he chose a frog for our logo. To give it a bit of a fairytale background, he added a crown, depicting the ‘frog to prince’ tale – the rest is history as they say! We have just over 1,500 customers, ranging for small companies who have an order of 10 sheets, once per year for business cards, right through to customers who want 350,000 sheets per month. No customer is too big or too small – we treat everyone with the same level of enthusiasm and commitment.”

So this is a story of two colleagues who borrowed hard, worked harder and invested in leading edge technology to create a sustainable and profitable business. It seems that jumping on the digital band wagon has been a smart move for Die Druckveredelung Köch & Glasder GmbH!