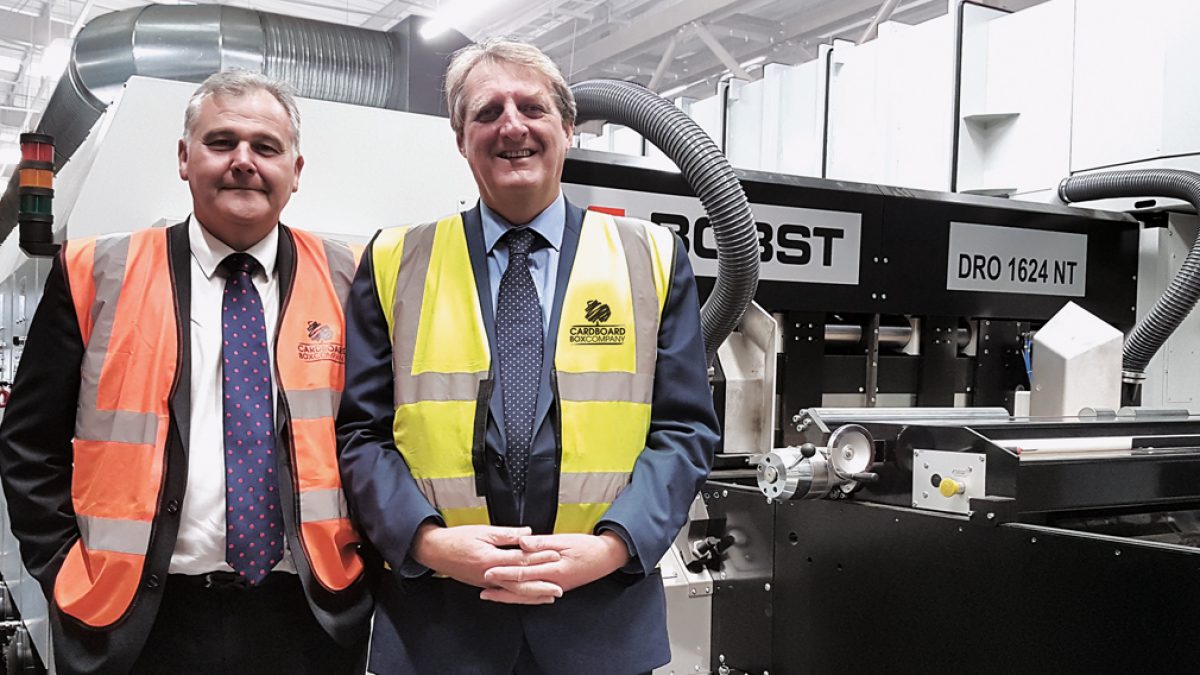 When The Cardboard Box Company (CBC) was asked to supply large volumes of printed shelf-ready packaging (SRP) on coated board with a gloss finish, it wasn’t the first time the company had been asked to deliver on the substrate. Indeed, the customer requirement was representative of a growing trend for SRP featuring high quality graphics to enhance on-shelf appearance and drive retail sales. However, it was the first time that CBC was being asked to deliver such high volumes on a continuing basis.

Ken Shackleton, Managing Director of CBC, said, “The gloss-finish on coated corrugated makes it harder to dry, because the ink sits on the top of the substrate rather than being absorbed. Very quickly, it became apparent that we had an issue and in order to meet our own service delivery standards and the needs of existing and future customers, we had to take action. Although we could produce these boxes, because they were on coated board with a gloss varnish, the speed at which they ran through our printers was greatly reduced – possibly only 25% of the output of uncoated board was being achieved. Added to that, despite having hot air dryers on all our printers, we were repeatedly experiencing issues with scuffing, scratches and debris getting on to the print, resulting in sky-high rejection rates.”

He contineus, “We were having to run a 24-hour operation to fulfil orders and our 24-48 hour delivery turnaround service was being stretched to its limits. We had a big problem and if we didn’t resolve it, it was clear to see it would have a huge impact on business. Coated corrugated was where the market was heading and we had to be in it.”

CBC is not one to shy away from investing to deliver success. In 1999, Chapman Containers, as it was then known, was bought by a private investor, Peter Street. With a new owner and a new name, there began a period of growth, underpinned by investment in people and plant. In 1999, the company had a turnover of over £3 million. Today, that figure stands at £15 million and CBC has developed into one of the best-equipped sheet plants in the UK. From basic brown box and simple flexo printing, to sophisticated flexo, litho-laminated and digital print, the company offers a broad range of services. In the past three years, the company has won five awards for its commitment to quality, including three EFIA golds.

Working with Bobst
In 2002, CBC invested in its first Bobst machine – a Visioncut die-cutter; the first such machine that bobst had sold to a sheet plant in the UK. “It was the beginning of a long, strong and trusting relationship between ourselves and Bobst,” said Shackleton, who has worked at CBC for the past 34 years.

Since that first machine, CBC has installed a further seven Bobst machines, including a 924 four colour Casemaker, a 1636 four colour rotary die-cutter, a 618 four colour casemaker, two Visioncut die-cutters, a Pacific gluer and in 2017, an Expertfold gluer.

“The recent investment in the Expertfold 165 was necessary and a relatively logical decision,” added Shackleton. “It came as a result of growing demand for multi-point glued SRP. The investment in the Bobst Flexo 1624 six colour printer was very different. Before we started working with our new customer on coated corrugated, we truly believed our next investment would be in digital. However, the issues we began to experience could not be ignored and we quickly realised we needed a new printer that could handle coated materials and achieve the print results that our customers were demanding. This really posed a dilemma for us; while we are a successful company, we are still a small business and with a turnover of £15 million, the purchase of a Masterflex XL or HD was out of the question.”

Shackleton and his Director of Manufacturing, Nick Lee, contemplated machines manufactured in Asia, but the lack of technical and customer support made them reconsider. The team turned to longstanding and trusted machine supplier. Nick Geary, Area Sales Manager, Business Unit Sheet Fed, at Bobst said, “The issue for The Cardboard Box Company related primarily to achieving high-end, consistent print performance on the machine and their investment had to reflect this. It was a case of finding a solution that achieved exactly what they wanted in terms of performance on coated corrugated and at the right price point. We created a bespoke print solution in the Flexo 1624 NT – a six colour high-specification printer that traditionally forms part of an inline machine. For The Cardboard Box Company, we offered it as a standalone printer that would achieve everything that was required of it and importantly at the right investment level for our customer.”

The new printer was one part of the solution to the issues that the company was experiencing with printing on coated corrugated. The dryers and cleaners were also crucial elements to ensuring optimum printing performance. Recommendations led CBC to Baldwin Technology. Shackleton and his team were impressed by Baldwin’s offer and commissioned the Flexo Clean Pick and FlexoDry HD systems to be integrated into the new press.

Quick decisions
From recognising the issue that they had with existing printers in October 2016, by Christmas that year, CBC had placed an order for the Bobst Flexo 1624 NT with integrated Baldwin drying and cleaning technology. In the six months that followed, Bobst and Baldwin partnered to carry out research and development at Bobst Lyon, France, to ensure the two solutions were harmonised and implementation would run smoothly. The line was installed in June 2017 and commissioned by the end of August. Its impact was felt immediately and has transformed the capabilities of CBC.

“We thought we were getting a new machine that would just do the job we wanted but thanks to Bobst and Baldwin Dryers working together, we are pushing the boundaries of what is achievable in flexo printing and looking at doing things we never thought we would be able to achieve. The personal input from the two teams, working together to develop a solution that addressed our needs, has been invaluable and the performance of their products is first class,” added Shackleton.

“The quality of the printing and colour consistency is superior to what any of our existing equipment can offer,” said Director of Manufacturing, Nick Lee. “Downtime has reduced drastically and efficiency has improved significantly. The speed that we are now printing coated board has relieved the pressure on all our standard flexo printers, allowing further continued growth at our expected service levels. The new line took our print capabilities to another level within a matter of weeks. High quality graphics at 130dpi and precise print registration is already allowing us to convert some of our litho-laminated work to flexo which brings significant cost benefits to our customers.”

For Shackleton, there were two key factors that influenced his decision to purchase from Bobst and Baldwin Technology; the role they play in supporting British manufacturing and the customer service and technical support that was on the company’s doorstep. “We are a service business, delivering to customers in a matter of days, not weeks,” he said. “We need to be able to work closely with our suppliers so that should there be a problem, it can be quickly resolved without it having a major impact on productivity here. When we bought this new printer, we were stepping into an area that we weren’t familiar with and needed significant support to implement. Bobst and Baldwin both have UK-based customer and technical support. This was very important for our business.”

Shackleton concludes, “I believe that we are at the beginning of a new period in the history of The Cardboard Box Company. The possibilities of what we are now able to achieve are only just beginning to become apparent. We are an innovative and creative company which can offer a full spectrum of services and capabilities, I am excited to see where this investment will lead us in the future.