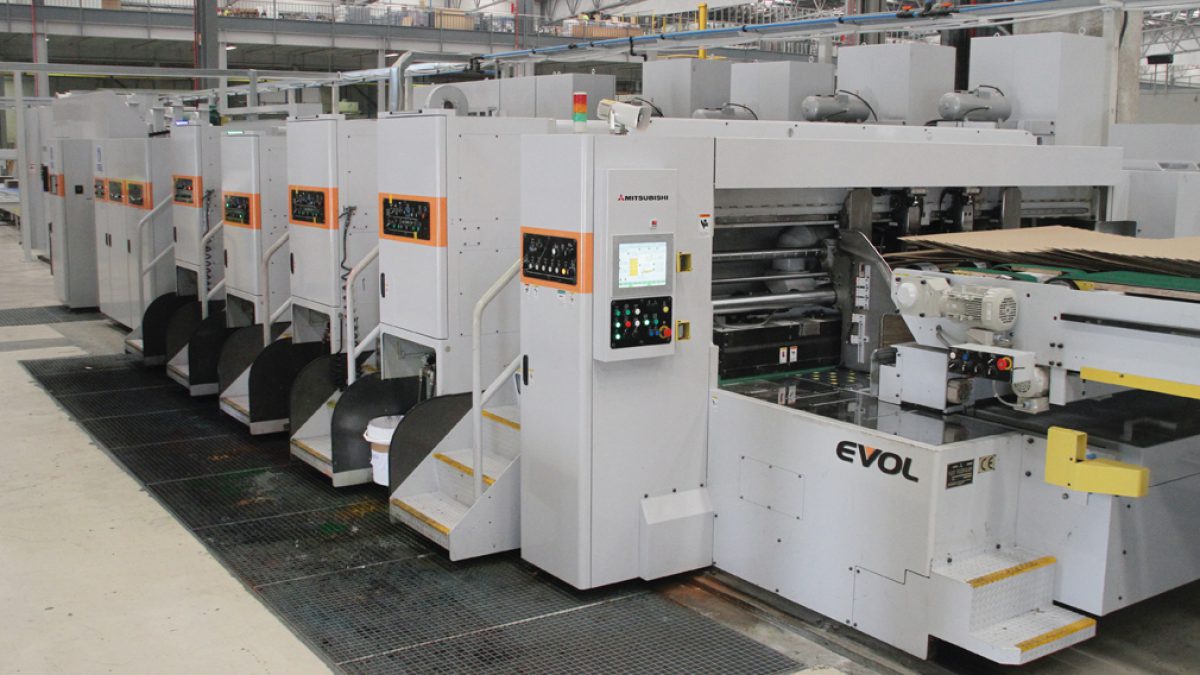 Hinojosa, is a leading Spanish corrugated manufacturer, with multiple sites throughout the country. Now with the third generation of the family holding senior positions throughout the organisation, the company operates 12 manufacturing sites in Spain and thanks to being a founding member of the Blue Box Partners, has representation across Europe. Today, the company employs more than 1.300 people, produces in excess of 650 million sqm of corrugated board per year, generates €353 million in sales of corrugated packaging and works with over 6,500 customers. The group also has two paper mills for the production of corrugated base papers.

Being one of the leading privately-owned packaging producers in Spain, the company focusses on higher value packaging solutions, rather than simply chasing high volume, low value accounts. Investment in high quality flexo printing (pre- and post-print), as well as litho print for both cartons and litho-laminated products puts Hinojosa at the leading edge. The addition of digital print a few years ago helps set them apart.

The corrugated board plant, Vegabaja Packaging, was established in 1976, focussing on the design, manufacture and handling of packaging and corrugated packaging for the different sectors of industry and agriculture in south-eastern Spain. Based less than 30km from Alicante, the company is now part of the Hinojosa Group.

Vegabaja Packaging has seen some impressive levels of investment over the last few years, with the construction of a new 50,000 sqm site back in 2011. The plant was designed to be a high output facility, with state-of-the-art 2.8m corrugator from BHS Corrugated producing in excess of 120 million sqm of corrugated board per annum. The Volume Line has been equipped with two Modul Facers and produces B, C and E flute board, as well as BC, BB and EB double wall board. With a production speed of 400m per min, the reel stands have been modified to allow Vegabaja to run two reels at the same time – for example, one reel of pre-printed liner and one reel of standard liner. “Being able to run pre-print is important, as it helps us keep production costs down for printed boxes,” says Vegabaja’s Production Manager. “It is a good solution for us, as we do need graphics on many of our boxes, especially for boxes being made for agricultural businesses who like to see printed trays for fruit and vegetables.”

They also have an automated vertical warehouse with a storage capacity of 800,000 sqm. This high rack storage system from Duro Felguera offers many advantages, allowing them to optimise the space of the plant, achieve better planning and management of the finished sheets from the corrugator, as well as providing improved drying time of the corrugated sheets, prior to converting. Much of the materials handling system and infrastructure was handled by the Spanish corrugated machinery specialists.

Already one of the most highly productive plants not only in the Group but also in Spain, Vegabaja Packaging has not sat on its laurels. In the late spring of 2018, the company took delivery of the first Mitsubishi EVOL 115 flexo folder gluer in Europe. “We have followed the progress of Mitsubishi’s high speed casemaker for some time,” explains the Group CEO. “Thanks to the close collaboration with Blue Box Partners, we have seen the machine in action at our European partners’ plants and were hugely impressed with its output and box quality. We visited Japan on an MHI Open House late last year and were convinced by the larger format machine and placed the order with little hesitation. It is going to be a game changer for the Vegabaja Packaging facility for sure.”

Another important feature of this new casemaker is the Mitsubishi Pre-Feeder, the first of its type to be installed in Europe. “We had looked at various types of pre-feeders in the market, but none of them could handle the board fast enough to allow the EVOL 115 to run at full speed,” says Vegabaja’s Plant Manager. “Mitsubishi presented to us their own concept, which has been running in Japan for a while now. We were impressed with the performance, so opted for this new style of pre-feeder.”

“Securing this project with Hinojosa and its Vegabaja Packaging site is testament to the relationship that we have built up with the Blue Box Partners,” says Giovanni Bettini, Sales Director, MHI Europe. “We have installed EVOL casemakers at member companies throughout Europe, including at VPK Group in the Benelux, Rigid Containers in the UK, VPK Peterson in Scandinavia and Hinojosa in Spain. This installation at Vegabaja Packaging is the first EVOL 115 in Europe and has been quickly followed by several others, some of which are at Blue Box Partners plants.”

“The EVOL 115 is not only the largest box making machine in the EVOL stable, but its output also surpasses that of similar-sized machines by a significant margin,” continues Bettini. “This size and speed gives users more capacity and options to grow their business. Designed for demanding daily production, the EVOL 115 effortlessly converts corrugated sheets into the highest quality boxes with industry-leading box squareness.”

“We have been impressed by the quality of build and the output potential of these high speed casemakers,” says Hinojosa’s CEO. “We chose the EVOL 100 for Bernabeu in order to increase productivity and improve the overall quality of boxes for our customers. We have already had excellent feedback from customers who say that boxes run on the new EVOL have no problems when being run on the case erectors, which is very important.”

He concludes, “For Vegabaja, we opted for the EVOL 115. We have also opted for the first MHI pre-feeder for this machine, such is our confidence in Mitsubishi. When we began the project, MHI ran a detailed simulation of all the work being run on our three casemakers and came to the conclusion that one EVOL 115 could handle the work load of the three existing lines. It really has been a strong project, which we are very happy with.”