Features > Growing a business – one step at a time 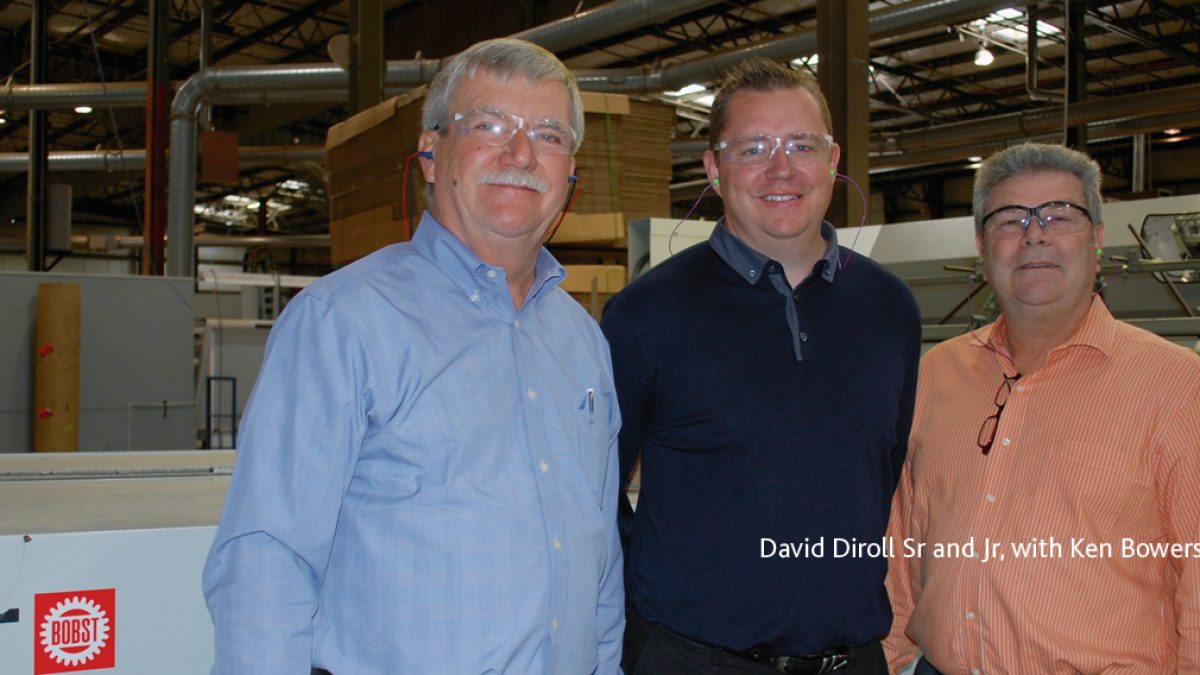 Growing a business – one step at a time

It is not uncommon for David Diroll Sr. and his son David Jr. to invite customers and even fellow independents to tour their Midwest sheet plant. As they walk through the modern manufacturing area, David Sr. likes to point out, “This isn’t grandpa’s sheet plant.” Indeed, almost every converting line and production process has been updated or reconfigured in the last decade for added productivity.

Jamil Packaging is a case study in how to successfully expand a family-owned business without diluting the family culture. “We’re trying to maintain the culture but also become more standardized as we grow,” David Jr., General Manager, says. By this he means keeping in place the structure of continuous improvement without losing the more casual family atmosphere. “That family feel has helped us be successful,” he says. The mid-sized corrugated manufacturer is located in Mishawaka, Ind., where old fashioned neighborhoods are plentiful and family comes first. The entire Diroll family is involved in the business, which is owned by David Sr. and his wife, Mary Ellen. All four of their children, David Jr., John, Mark and Amy, work at the company.

The gradual, controlled growth began when the Dirolls took a hard look at the business. What they saw concerned them. The realization that they were working hard for very little benefit was a wakeup call that needed to be answered, David Jr. says. “The bottom line margins weren’t the expectations for the amount of sales that we were doing.”

To reconcile this disconnect, they made a dedicated commitment to focus on the things that they could control and not get distracted by everything outside their four walls. They implemented continuous improvement processes, purchased cutting edge manufacturing technology and most recently became part owner of Alliance Sheets, an Indiana sheet feeder.

Today, Jamil is in an enviable position, with processes, technology and trained personnel in place to sustain the business. “Now we’re in that phase of building a solid foundation for the future,” David Jr. says.

There are two facilities — a 179,000-sq-ft sheet plant in Mishawaka and a 50,000-sq-ft sheet plant in Gallatin, Tenn. — that serve an industrial brown box market. The total workforce is about 105. The Gallatin plant was started 30 years ago when a major customer moved its operations to Tennessee. Much of that business has since disappeared, but the Dirolls remain committed to that market and recently expanded the building and added more equipment.

The company’s transformation began more than 10 years ago when David Jr. and his father enrolled in the Cycle of Success Institute. Another corrugated company referred the business coaching and training program to them. “It gave us the management tools to dissect the issues facing our company and not worry about the outside market,” the younger Diroll says.

Once a month he, his father and Jamil’s controller would drive to Chicago to attend day-long classes. They did this for one year. The exercise resulted in a variety of strategies that included the formation of teams and committees to examine and prioritize issues and identify and solve problems. Throughout that process it became abundantly clear that new technology was needed to support and accelerate growth. The first investment was a Bobst Martin DRO 1628 GT rotary diecutter. The two-color machine has a Geo. Martin Valu-Stak and Pozi-Stack. Ken Bowers, Operations Manager, says the new equipment provided an opportunity to produce more graphically-appealing products. For example, it’s not uncommon to run a four-color job on the DRO, double passing and printing both sides. “We’re not afraid of it,” he says.

Two years later a mid-range Bobst Martin 924 flexo folder-gluer was installed. “That took us from a week’s worth of work on an older flexo folder-gluer and doing it in about a day and a half,” David Jr. says. The machine opened up a significant amount of capacity. It averages seven to eight minute setups and has recorded several production records. In 2010 the operators ran 131,954 boxes and completed five order changes, running 17,688 boxes per open hour in eight hours. It was game changing technology and a turning point for Jamil, realizing how new equipment could offer customers quick turnaround, reducing the need to inventory finished goods. With the newer technology, finished goods inventory has been reduced from a 90-day to a 30-day supply.

More recent investments include a Bobst Expertfold folder-gluer, one of the first of that model in the U.S., a Kongsberg cutting table, and a previously owned 50-inch 1232 NT flexo folder-gluer. The NT replaced an older flexo that was moved to the Tennessee facility.

The Cycle of Success program presented a few opportunities for differentiation, one of which was speed to market. A partnership with Five Star Sheets, a sheet feeder in New Carlisle, Ind., allowed Jamil to guarantee customers 24-hour turnaround. An ownership stake in a sheet feeder was the desirable goal, but unfortunately not in the cards with any of the current suppliers. David and his father met with Jack Schwarz who owns and manages several sheet feeder operations around the country about establishing a consortium in Indiana or Michigan.

Alliance Sheets was started up in October 2014. There are several partners,  with the Schwarz Group as the managing partner. The greenfield plant in Bristol, Ind., has a 132-inch BHS corrugator, the first 132-inch machine in North America. It runs A-, B-, C-, E-, E/B and A/C flute. Jamil receives about 90% of its sheets from Alliance — about eight to 10 truckloads a day — and has reduced its onsite inventory by about $300,000. David Sr. says being part owner of a sheet feeder has calmed his fears about being priced out of a market controlled by integrated companies.

David Jr. references the importance of choosing the right partners such as Bobst and Schwarz. “We could always buy cheaper sheets, but one of the things that Jack Schwarz told us at one of our first meetings was that you don’t get into a sheet feeder for cheap sheets. There are many other reasons that are more valuable. That openness from a brilliant person in our industry meant a lot.”

The Dirolls are currently researching their next strategy. The goal is controlled growth.

Read the full feature in the January/February issue of CORRUGATED TODAY!