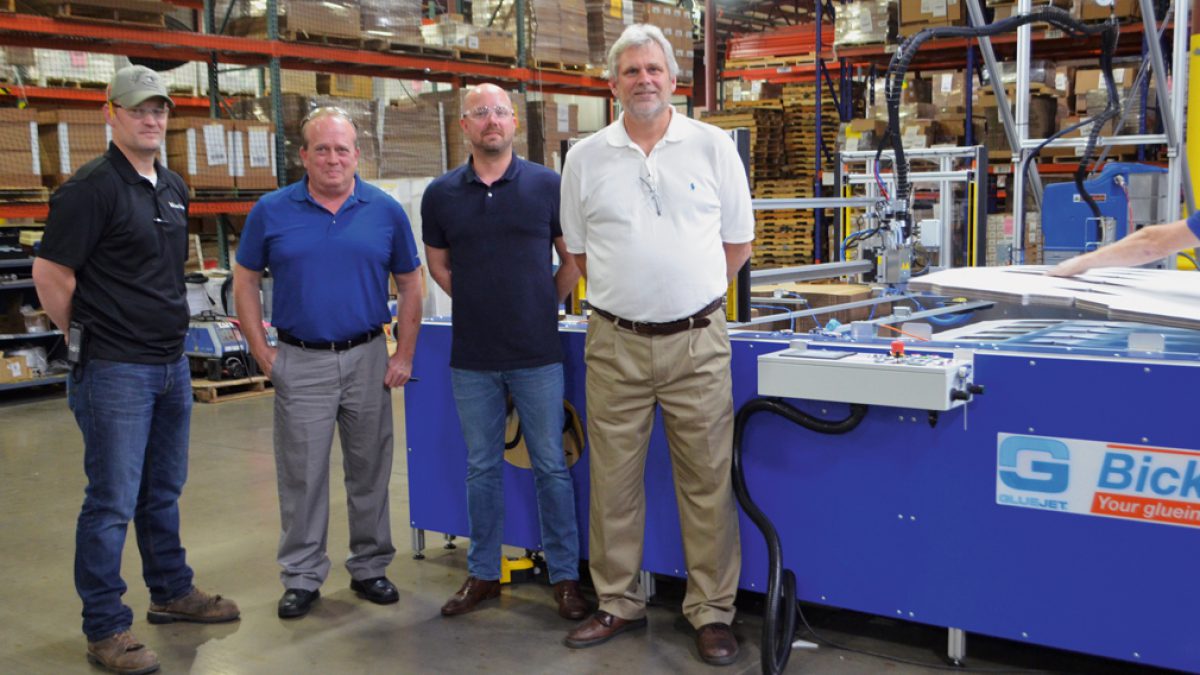 With record low unemployment in the U.S., corrugated manufacturers are seeking innovative solutions to automate their more labor-intensive processes. Great Northern Corp.’s (GNC), Chippewa Falls, Wis., sheet plant is a perfect example. In May, the plant installed a Bickers GlueJet gluing table to automate the gluing of in-store point-of-purchase displays.

The sheet plant has a large fulfillment center that shipped more than six million orders last year. “We do everything from simple two-piece glues and collating of parts to support packaging lines, but the bulk of what we do is full-blown display work,” Ron Hermes, Logistics Manager, says.

Many of the displays require some type of gluing, which until recently, was done manually on an assembly line with hot melt glue guns. That gluing process has now been transferred to the new Bickers GlueJet XY gluing table, which automatically applies any kind of glue, hot or cold, onto any type of substrate. “The Bickers machine is able to glue at a higher speed and it’s also more consistent in its application,” Mike Geiger, Fulfillment Supervisor, says. “With four operators doing independent jobs, we can now use those folks who were doing the gluing on the production line and help them better value add to the project. It helps in two ways; it is faster than gluing by hand and it helps us to better allocate the labor on the floor.”

Hermes adds, “Depending on the piece, we can glue on the machine between two to five times faster then we can by hand. It’s a tremendous uptick in efficiency and it’s spot on in its accuracy. The glue application, pattern and amount of glue are perfect every time. It’s really pretty cool.”

The Search
GNC had been looking for a way to automate the gluing process for a while. The company wanted to speed up the process and increase safety. “Putting 350 degree glue down by hand was a safety concern,” Geiger says. “Also, we are always seeking out ways to automate the fulfillment process and help value add with the labor that we have because labor becomes harder to find. I began the task of trying to find such a machine. I wasn’t sure that anything existed.”

In fact, equipment vendors told Geiger that an automated solution didn’t exist. However, during his search he came across Bickers, a European company based in Germany. There are about 250 Bickers GlueJets installed worldwide. Graphic West Packaging Machinery is the U.S. agent that sold the machine to Great Northern. GNC chose a larger format model (1700 x 2500 mm) that can accommodate a 60- x 98-inch sheet. “We looked at capturing 99% of the sheet sizes that we glue by hand,” Geiger says.

The gluing table is used for P-O-P displays and components. “We are working with large volumes and this helps us to bring those parts to the assembly line,” Geiger says. “It helps both with our efficiencies on the line and safety. We don’t have to wheel a hot melt applicator onto a production line and worry about power and heat.”

The GlueJet is used primarily for corrugated, although GNC has used it to glue PET windows on large dump bins. Geiger says the machine offers a lot of opportunity in terms of its application in the fulfillment center.

Machine Efficiencies
The machine is user-friendly and programmable for fast makeready. It can be programmed to glue any pattern, including curves, half circles, arcs, and wave patterns. As part of the training process, operators had to program the machine to write their name.

The machine will save up to 1000 different patterns, which is a valuable feature for GNC for repeat jobs. “Many of our simple two-piece packaging type gluing operations are repeat jobs. This memory feature cuts setup time down to almost nothing. The operator just puts the corrugated in the machine and turns it on,” Hermes says. “In the last week in a half that we’ve had it in operation, we used the table to glue more than 12,500 pieces.”

The machine has a built-in clock actuated output, which sets a constant production pace. Operators can program pause cycles between each piece or they can control the cycle manually with a foot pedal.

“It used to take us hours to work through a part and now we’re down to five minutes to set up and a minute to run,” Geiger says. “The program is simple and easy to operate, easy to understand, and easy to maintain. It took a complex problem and reduced it to ease of use and simple maintenance. They’ve done a great job of designing the machine.”

“We fully expect to cut the labor that we had for gluing at least in half, and we do a lot of gluing,” Hermes adds. “As unemployment decreases, it’s at an all-time low in our area, temporary labor becomes very difficult to find and that is what is pushing Mike and I to look for those technological improvements that drive labor out of the process and at the same time drive our costs down and make us more competitive in the market.”

Impressive Startup
Bickers installed the machine at the Chippewa Falls plant on May 1 and it was gluing displays by May 4. “The technicians that Bickers and Graphic West sent over to train us were awesome. We have received tremendous support so far from those folks,” Hermes says. Remote access to Bicker’s facility in Germany assists with troubleshooting. Technicians are also available by phone.

Hermes and Geiger are so impressed with the machine that they are already thinking about a second one. “With the performance of the machine and its ability to work with people and be collaborative, we will be able to apply the labor in other ways. Instead of stopping a production line for a hand glued piece we can streamline the production line,” Geiger says.

Hermes says the projected return on investment was less than 18 months. “Now that we’ve gotten it we anticipate it to be far less than that. We do anticipate having another one in the budget for next year.

“We anticipate this being the best thing we’ve done as far as a technological advancement for some time,” he continues. “We struggled to find technology that works in our fulfillment center because we do lots hundreds of thousands of times. We don’t do things 100,000 or a million times very often. This is one piece of equipment that could instantly be put on the floor and used for virtually every application. We benefitted from it right away. It’s not something that we only pull out for a particular job like some of our equipment. This will work for virtually any gluing application that we have.”