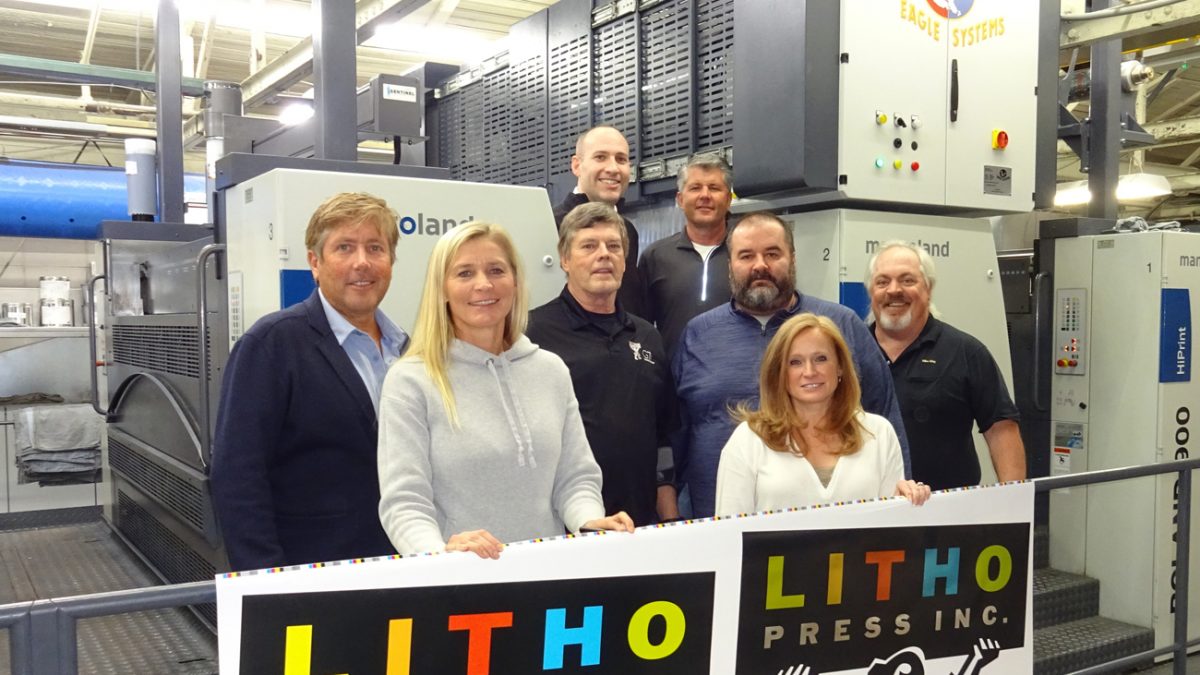 With the Litho Press spirit of innovation and some special engineering from Eagle Systems, another milestone of foiling abilities has been achieved. The Eagle Systems VLFM190LP 51” x 73” cold foil unit at Litho Press sets the bar higher, bringing new opportunities to designers and brands across the world and changing the way cold foil is done.

Litho Press, located in Indianapolis, IN, was founded in 1953 by father and son duo, Bebe and Jack Lacy. For 40 years, the company operated strictly as a commercial printer. When Lacy’s sons, Bernie and John, joined the family business in the 1990s, they expanded the business to include litho labels, top sheets and folding carton. 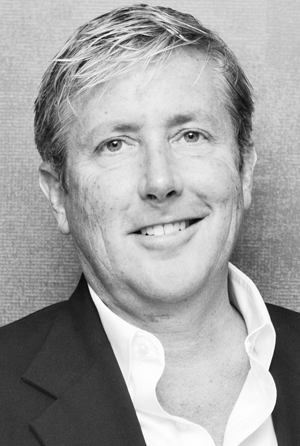 Bernie and John Lacy continue their grandfather’s legacy of staying on the forefront of technology and innovation. Today, Litho Press is one of the first printers to calibrate their digital department to G7 specifications. They are a certified G7 master printer, serving customers throughout the corrugated and folding carton industries.

“Our customer is number one. We believe in buying the best equipment, best ink, best coatings and best paper available. Only German ManRoland, Heidelberg and Koenig & Bauer presses are found in our pressroom,” said Bernie Lacy, President (pictured left).

Litho Press has an already impressive lineup of presses at their facility, including a 41” ManRoland 700, 64” Heidelberg Speedmaster XL164, 73” ManRoland 900XL and one of the world’s largest sheetfed presses – the 81” Koenig & Bauer Rapida 205.

Looking to maintain their position as industry leaders and innovative printers, they needed a way to differentiate themselves in the corrugated and folding carton industries and bring new options to customers. Justin Hiott, General Manager, explained how discussions regarding new CapEx investments, eventually led them to work with Eagle Systems, to create one of the world’s longest cold foil units. This innovation fills a void that has existed in the marketplace up until now, for cold foil jobs up to 73” long.

The new size capabilities for foiling has opened the door for Litho Press to cater to the corrugated market now, bringing them solutions that were not readily available due to size limitations. Typically, the cold foil units are on 40” presses, limiting foiling options to the folding carton industry. Now, cold foil can be applied to labels up to 73” that can then be applied to corrugated sheets, allowing designers to use foiling in new ways. With this new cold foil unit on their ManRoland 900XL 73” 6-color press with UV and Aqueous Coater, Lacy hopes to offer designers new options for corrugated displays and packaging where they couldn’t add foil before.

“This is something new and exciting for the corrugated industry,” said Lacy. “Cold foil isn’t new, but the size limitations have kept foiling somewhat exclusive to folding carton. We are proud to offer this new option to our customers and we expect to see great success. My hope is that our corrugated customers see this as an opportunity to differentiate their packaging in a new way,.”

Litho Press saw the opportunity to attract new business by doing something bigger and better than anything else available. “In the days of digital printing and trying to keep ourselves relevant in offset printing, we needed to do something that no one else could,” Hiott explained.

“We are one of the only ones in the world doing this and here we are in small country, Indiana,” said Hiott. “We are proud to represent Eagle Systems and to bring this opportunity to the global market.”

Hiott continues, “We don’t know what the future holds. Based on the excitement from our customers and the generation of quotes, we expect a lot of interest in this new offering. We anticipate this foiling unit will pay for itself within 12 months.” 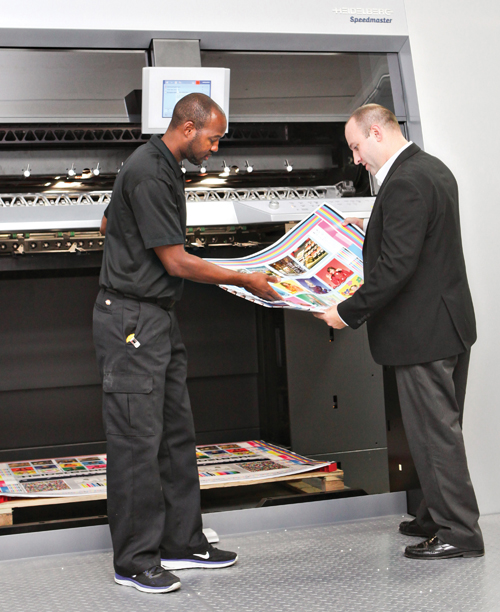 Justin Hiott examines printed sheets with one of the press operators.

Eagle Systems was one of the first companies to engineer a large foil machine in 1975. “My first foil machine was, what I thought, a large format – 35” x 49”,” says Mike King, owner of Eagle Systems. “It ran at maximum speed of 4,000 sheets per hour. Hundreds of these machines have been installed worldwide over the past 45 years.”

Cold foil has always been an option in the marketplace, but Litho Press didn’t know if it would work for them. “Within a week of conversations with Mike, we realized it could be done and would be relatively inexpensive, in terms of CapEx improvements,” said Hiott.

Cold foil is typically done on silver foil with overprinted colors. Before this, colors were produced with multi-pass hot foil, which is costly and time consuming due to the need for dies and colored foil.

This new solution applies glue in the first unit of their ManRoland press, then the silver foil is applied in the second unit. From there, it passes through the last four units where colored ink is applied to the foil, giving the package an eye-catching sparkle and pop of color, further setting its packaging apart from competitors. Previously, Litho Press had been printing on full-up, metalized non-recyclable sheets or board also known as laminated foil board, laminated foil sheets or metalized polyester. Cold foil is in fact 100% recyclable and re-pulpable.

“This is a new marketplace for this size format, as it has never been done before,” said Hiott. “This gives us an opportunity to improve turn-around times for customers, lower costs and it provides us with a new offering that adds value to our company.” 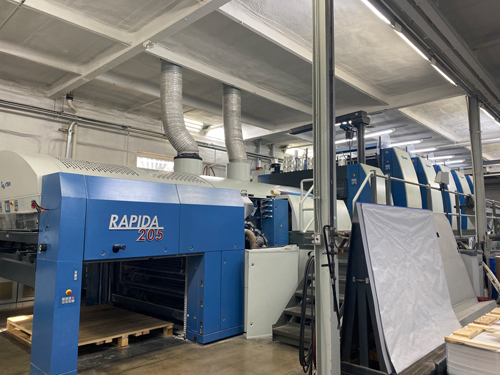 Engineering this cold foil unit came with a list of obstacles, due to the old-style of the Litho Press building, low ceiling heights and multiple slanted roofs. “The engineering challenge to build a foil loading crane was above and beyond imagination, but we did it,” said King. “The Eagle itself, came with its own set of challenges, as a special flexible ramp needed to be built just to install the machine.” Eagle Systems worked closely with an external engineering company for building modifications that were needed, to accept this challenge.

The average running speeds of this size format is approximately 8,000 sheets per hour, although the Eagle is tested prior to shipping, at 22,000 sheets per hour. “This machine will last a long time, as it will run less than half speed,” said King. It comes complete with a fully-electric ball screw driven make ready table, enabling easy loading and unloading of shaft mandrels. Also included is spare shaft with a preload system, helping to keep production moving and allowing for faster roll changes. It has the ability to run narrow webs, like the smaller Eagle. 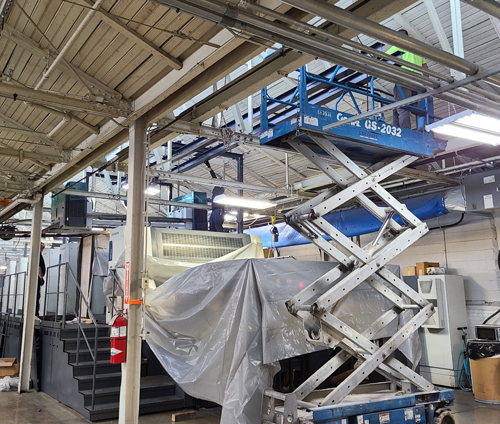 Litho Press has already began running orders on the cold foil unit. Its first customer was a cannabis company who was looking to differentiate their product lines by using colored foil on their packaging. The sales team expects the cold foil offering to increase business by 20%, by providing them with an opportunity to get into customers they wouldn’t have before and by giving customers a reason to reach out to Litho Press, instead of one of the many other printers. 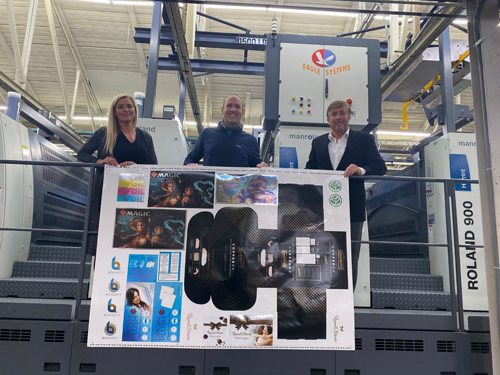