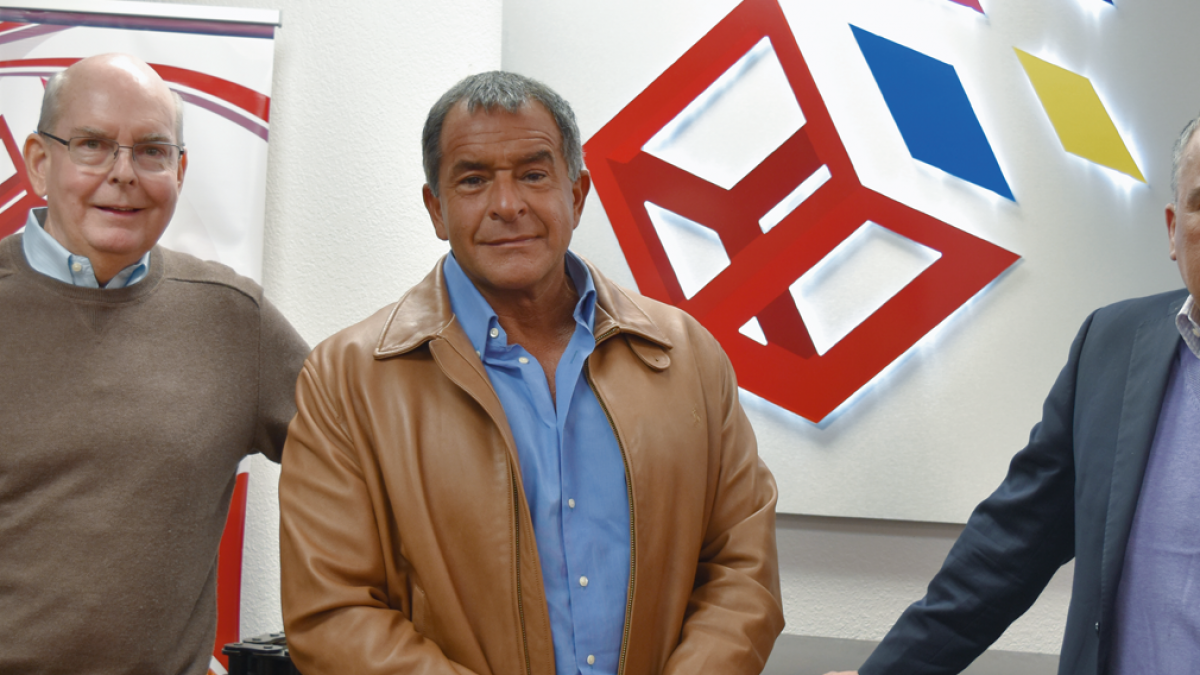 Consolidation in the U.S. folding carton industry has significantly disrupted the competitive landscape, especially for privately-held independent companies, which now comprise about 20 percent of industry sales. Independent’s market share has declined by more than 10 percent over the past 15 years, due primarily to industry consolidation, according to Packaging Strategies 2017 Packaging Outlook Report.

While some company owners view the current state of the industry with despair, others are confident. Paul Malooly, President of El Paso Paper Box (EPPB), falls into the latter category. Malooly is upbeat about the future, thanks to a new 110,000-sq-ft facility, recent investments in state-of-the-art technology and the strong U.S. economy. “I have a lot more hope now with the new administration and the economy. Now I feel confident that the world is our oyster,” he says. “Banks are becoming partners, not scolders. I’m constantly re-investing into the business. I love what I do. I love this business.”

El Paso Paper Box is located in El Paso, Texas, on the northern border of Mexico. The company manufactures a wide variety of paperboard packaging for customers around the U.S. and in the Caribbean. Markets served include electronics, automotive, consumer goods, beauty, food, and healthcare.

“We’re unique with our directive and our market and what we can do,” Malooly says. “Quality and pricing are a given. Lead times with certain customers have to be at a certain place, so how are you going to make your mark? What makes us different is that we can respond quickly and we offer personalized concierge service.”

Malooly got his start in the folding carton industry in 1995 making jean flashers – paper labels sewn on the back of jeans. El Paso was considered the jean capital of the world. Eventually, that business was outsourced to other countries, but by that time Malooly had established EPPB as a paperboard printer.

A turning point in the company’s growth came in 1999 when Smurfit-Stone Container shut down a folding carton facility in El Paso. Malooly hired several of the employees, including Carlos Espinoza, EPPB Vice President & General Manager, as well as key customer service representatives and production staff, all of who are still with him today.

In 2000 the company moved to a 55,000-sq-ft facility and added new equipment. EPPB relocated to its current facility in 2013. The company has 170 employees and operates three shifts.

“We’ve come a long way,” Espinoza says. “When I joined Paul we didn’t have email or a marketing brochure or a receptionist. It was a totally different company. The analogy would be if you took the corner grocery store and you turned it into a Walmart.”

EPPB is one of the largest carton providers in the region. “That is a testament to Paul’s vision and to the people we have here that we’ve been able to compete with multi-nationals and they’re out of this region now and we’re still here,” Espinoza says. “Paul has a really strong personality. When he puts his mind to something he gets it done. He’s a visionary with a will to succeed.”

In-house efficiencies have been a key to the success, according to John Dowd, Executive Vice President. “We are nearly 100 percent vertically integrated with all aspects of the business done in-house, including making our own stripping and blanking tools. The only thing we don’t make is the board.” Dowd joined the company three years ago to assist Malooly with capital equipment investments. “I needed another set of experienced eyes to assist with the capex and implement our future visions,” Malooly says.

The new 106 is the company’s first offset press that was purchased new. EPPB has three offset presses. In addition to the new 106, there is a KBA 130 50-inch seven color and a Komori 40-inch eight-color press.

The 106 doubled the printing capacity. All of the high-end packaging work was switched to the new press. Manny Corral, Printing Supervisor, says. “I’ve worked for many years here and this is the first time we’ve purchased a new press and the speeds are just amazing – 18,000 an hour and perfecting. It’s a new world.”

Press operator Carlos Hernandez agrees. “These new KBAs are amazing machines. I can see throughout the whole press as it’s running, which is very helpful.” The QualiTronic ColorControl inline color measuring system uses an inter-deck camera system integrated directly into the press. The control strips can be positioned either at the front or in the center of the sheet. This ensures that the package printing maintains color integrity on customer logos and product.

Hernandez, who spent some time at KBA’s training facility in Germany, says the new press will help expand into new markets. “We’re getting into different types of coatings because the market is asking for much more and we’ve got to keep up,” he says.

EPPB can now offer a variety of solutions, such as six-over-one positions for customers who require packaging with coupons or instructions printed inside the box all in one pass. Previously, that capability cost more and required two makereadies and two days to complete a perfecting job.

The converting and finishing departments have four Bobst diecutters – the newest is an Expertcut 106; three Bobst gluers – an Experfold was installed in 2015; and two window patchers.
EPPB is retrofitting all four diecutters with the Bobst Chase Changer system including Quick Lock frames.

Partnerships with customers and suppliers, such as KBA and Bobst, are important. Dowd says, “They have really stepped up to the plate and helped us grow our business and that’s as integral as anything.”

Malooly says he tells vendors, “Cheaper is not going to get the business. What you are going to do for me is become our partner and keep us abreast of the latest technology and coach our guys on how to maximize your product to our benefit. If we are successful with your product you will continue to do business with us. It’s a lasting partnership.” 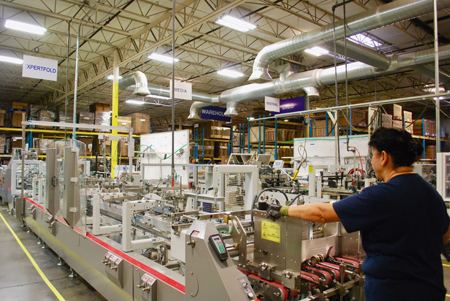 In March, a Bobst Foliostar sheet to sheet laminator, the first one in the U.S., will be installed. The new machine laminates offset printed top sheets to singleface corrugated. “It’s better adhesion, plus you’ve got a better scored and better looking box and you won’t get cracked edges,” Malooly says.

Several EPPB customers in the health care and food industries purchase litho-laminated corrugated packaging from other companies. Malooly is confident that he can
get the business and run it on the
new laminator.

Additional investments this year will include a new sheeter, a Baysek flat die – rotary anvil diecutter and a Bobst Masterplot 1317P. “The Masterplot will allow us to make samples, cut die ejection rubber, makeready sheets, die vinyl’s, cut our coating blankets, nick dies for the 104 and 106 cutters, and do our phenolic counters and lower stripper chamber,” Dowd says. “It will also be able to do steel counters once they tweak the software.”

The Baysek will be used to diecut round corrugated cake pads for grocery customers, a job that was previously outsourced. “Obviously, we like to keep things in-house,” Malooly says. “This is something domestically that is going to open up a big market for us.

“Our directive moving forward is to be a one stop shop for our existing customer base. I believe in growing organically. We have customers from within who could potentially bring us a lot more business,” he continues.

Indeed, the key sales message is the ability to provide fast turnaround and creative solutions. “We pioneer some things. By that I mean we take an idea and perfect it. We find the niche and make it better,” Malooly says, adding that the state-of-the-art prepress department is an important part of that strategy.

EPPB was one of the first companies to install an Agfa Graphics Arkana 125 smart plate processor and one of the first companies to use the Agfa Energy Elite Eco printing plate, a no-bake thermal printing plate for high-end, high-performance commercial, packaging and UV printing. The processor and the plate used in combination eliminate the use of rinse water, resulting in minimal waste generation. “The amount of fresh water used in pre-press is almost non-existent,” Dowd says.

For cutting dies, it has a Gerber Profile router and an Associated Pacific Ultrabender, the first in the U.S. “We’re one of the few folding carton companies that not only make our own dies but we make our own blanking tools,” Malooly says. “That’s a big play for us.”

Being a member of the Independent Carton Group (ICG) also offers a competitive edge from a contingency standpoint and purchasing power for raw materials. (The ICG is an association of independently owned and operated folding carton companies with 18 members.) “Being an independent is very tough in today’s world with all the consolidation, obviously being a member of the ICG has helped considerably,” Malooly says.

If Malooly has any regrets, it’s not purchasing new printing presses from the start. “The biggest mistake I ever made in this business was not buying new equipment a lot sooner,” he says. “We bought new cutters and new gluers, but we would never buy new printing equipment. I just could not step up to the plate and spend $3, $4, $5 million. I think El Paso Paper Box would have grown dramatically faster in a better direction if I had done that sooner.”

Nevertheless, with the new investments and a strong economy, the company is poised for growth. “We like where we’re going and we really like what we’re doing,” Malooly says. “We’ve got very good people in the right positions. Our top three pressmen have close to 100 years of experience and the same is true in the finishing department. We’re very blessed with the people we have. You’re only as good as your people.

“Manufacturing has always been in my blood and the No. 1 thing is you’ve got to be fearless and you’ve got to be smart,” he continues. “My mantra in life is not ‘Why me,’ but ‘Why not me?’”