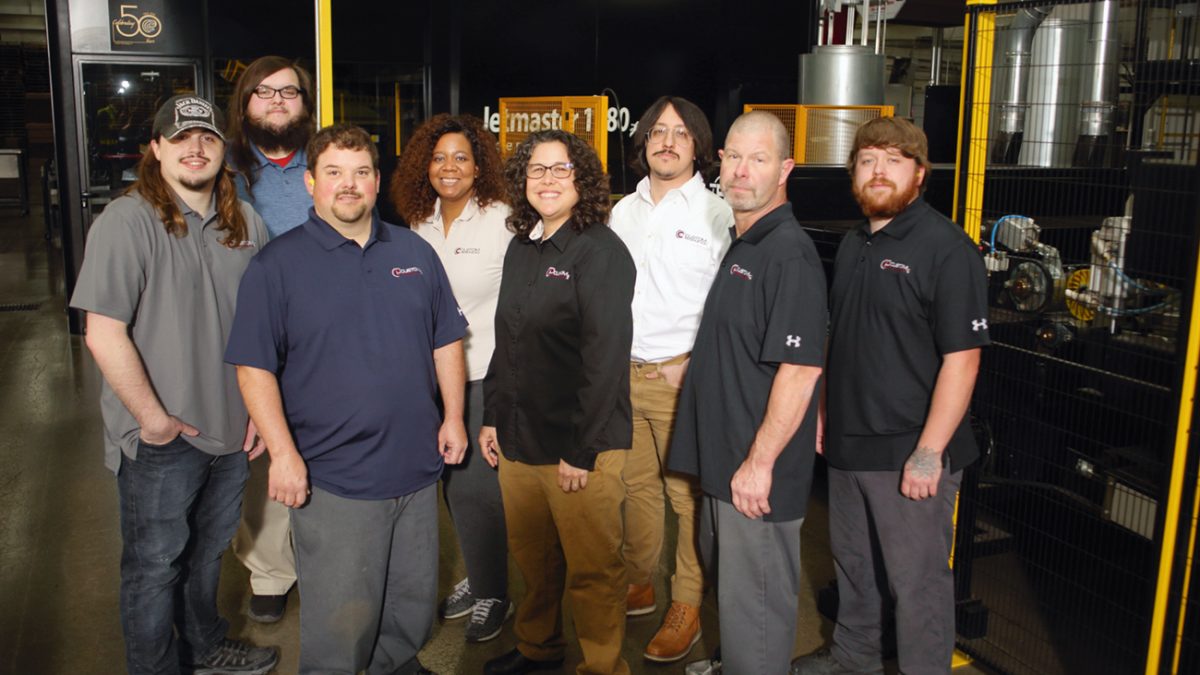 Custom Packaging was the fifth U.S. installation of a Barberán printer, which is intriguing because high-speed digital printing was not something that initially was on the company’s radar. The original plan was to find a replacement for its Gerber flatbed printer, which was used for prototypes and samples. While researching options, Stephanie Shelton, Digital Operations & Graphics/Prepress Manager and G7 Expert, became convinced that single pass digital printing on corrugated offered significant benefits, especially for customers.

After visiting U.S. plants that had machine installations and sending corrugated sheets to the various manufacturers, including Barberán in Barcelona, to evaluate print quality, the decision was made to purchase the Jetmaster. 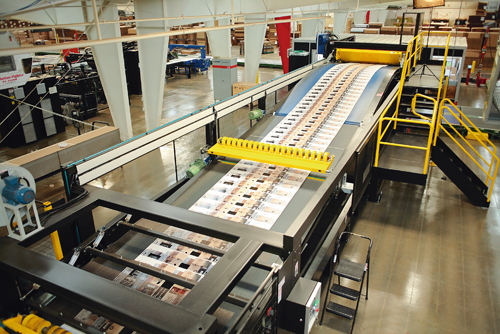 Before the machine was installed, Shelton began exploring ways to leverage the technology to take advantage of the litho-like print quality. She has worked at Custom Packaging for 20 years and her knowledge of printing and graphics is extensive. “Because of my experience I knew it wasn’t going to be just a push of a button to run the printer,” she says. “I wanted to be prepared as much as possible and tried to ask Barberán the right questions so we could be ready.” 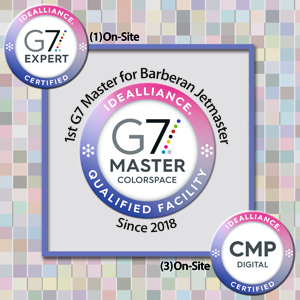 Shelton attended Idealliance’s G7 training course and six months before the Jetmaster was installed became a G7 Expert, one of only eight in the state of Tennessee when she received certification in August 2017. She also worked with Juan Martorell of ColorInLab Color Consulting S.L., as well as Barberán to achieve G7 Certification on Custom Packaging’s digital printer, the first installation to do so. “No one had achieved G7 Master Qualification for the Barberán when I inquired about it,” she says. “Since it is a high-quality CMYKOV printer and I had seen what it was capable of printing in terms of color, I knew G7 was possible.”

After his experience working with Custom Packaging, Martorell has since become a G7 Expert and has helped corrugated manufacturers become certified. “Custom Packaging was the first one, and they have successfully renewed their certification since they received it on Jan. 31, 2019,” he says. “Nowadays there are 11 more Barberán packaging companies certified in the USA. I’ve taken care personally of 100% of the G7 certifications of them.”

Martorell says brands like Procter & Gamble and Coca-Cola are requiring their packaging suppliers to use G7 standards. This ensures that their brand colors will match regardless of where or on what equipment the packaging is printed. “They can get a more similar print,” he says. “Between different printing companies, the grays are neutral and they increase the printing quality.” 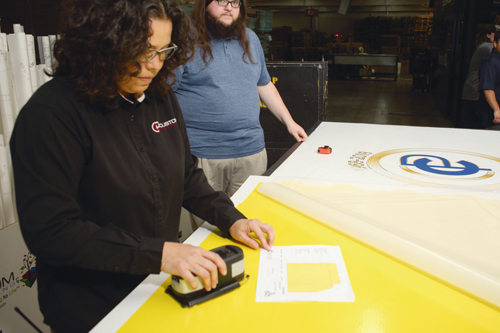 Shelton says G7 provides an opportunity to explain to customers color matching methodology. “It’s a good way to educate your customer on digital when you’re trying to match something. It’s not the same as when you’re trying to match a color on a flexo obviously. We have an ink kitchen for that. We are now able to say to customers, ‘If we want to hit 186 red and it’s off by a Delta E of 2, we are still within our G7 tolerance.’”

Martorell says Custom Packaging was relentless in its pursuit of G7. “They have been one of the most insistent. Stephanie became a G7 expert so she believes in this and understands the importance of printing the correct colors. It’s one of the companies that trusts more in this,” he says.

“Stephanie pioneered the way for us with the Barberán and G7,” says Julie West, Custom Packaging Director of Sales & Marketing. She says the company’s goal is to reproduce the same quality consistently with every order. G7 and the new digital printer facilitates that. “It added to all the tools we already had and it allows us to hit color matches and be repeatable because we have so many repeat orders,” she says.

The 210,000-sq-ft plant averages about 135,000 sq ft per shift. “We have a high functioning plant because we run so much square footage in two shifts. It is our culture and our focus. Every employee understands that.” 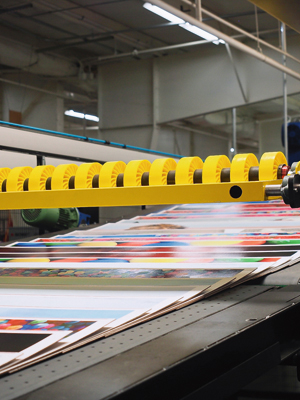 Digital printing has provided a path for new business as well as growth opportunities for existing customers. In addition, the company is running jobs for other board converters and other Hood Container Corp. facilities. Custom Packaging was acquired by Hood in 2019 and is the only Hood owned facility that has a high-speed digital printer.

Almost 70% of the litho label business has been converted to digital printing, however, West points out that not all jobs are suitable for digital. “The highest cost is the ink. A lot of times we have high quantities of a graphics job and a label might fit that better than the digital press for longer runs. But overall I think we’ve been extremely successful converting to our digital press, primarily because of the quality we get, which is a reflection of the team on the machine.”

Early on, Shelton was impressed with digital printing’s quality and cost-saving efficiencies. One job that comes to mind was a box for a well-known brand that had full coverage printing and a graphic side panel for the brand’s logo. When it ran on a rotary diecutter it required five printing plates. The solution was to flexo print the one-color full coverage, eliminating four of the printing plates, and digitally print the logo.

“The setup time on the die-cutter was over an hour,” West says. “That’s the one thing about the digital press. When we can switch something to it, we don’t have that setup time. It’s amazing the amount of money we can save for customers on printing plates.”

She mentions another example – a large two-piece produce bin that required two labels. “We took that from two labels, two die-cuts and two glues to direct printing it on the digital press in one pass and then to the 1636 Bobst flexo for die-cutting and gluing in one pass,” she says.

The digital printer also has helped workflow, reducing the number of machine passes, which can slow down turnaround time and increase costs. About 80% of the digitally printed jobs are converted and finished on the die-cutting and gluing lines. The rest is shipped to other corrugated plants.

West gives high praise to Shelton for much of the success of digital printing. As head of Digital Operations, she oversees a department of four people. Her responsibilities include ordering and forecasting supplies, troubleshooting print quality issues, and overseeing operational procedures, training, and testing. “I work with the plant manager to make sure the Barberán runs as it should and make recommendations as needed,” she says. “Also, I am in charge of the Digital Prepress & Graphics department which is what we call this department now that it is separated from structural design.”

The department is located in its own modular building next to the digital printer. “I was so integrated with the Barberán that it just made sense that I be right there. I have a production radio and can be on the floor and also can be there for pre-press. My window looks at the operator, and we have a remote doorbell when they need us to check orders,” she says. “A graphics person checks every order as well as the operator and production supervisor so all eyes are on every order to make sure we have a good level of quality of digital printing.”

With her attention to detail, Shelton has created processes and spread sheets for the printer. For example, she can forecast how much ink from the ink supplier (Toyo), is going to be needed for every order and better manage the inventory.

Shelton says none of this would have been possible if it wasn’t for the support she received from West and her husband, Gary, Custom Packaging President, and Denny Lemon, Chief Operating Officer. “With their support and with the great team of all the managers, we were able to implement the process and it has helped with the transition because it changes your workflow and pre-press,” she says. “That is what helped us be better prepared to get our Barberán running.”

West says the journey from the initial planning stages to the final installation has been exciting. “To know you are doing something to move your company forward resonates with everybody whether they’re working on the Barberán or not,” she says. “It keeps you at the forefront which was one of the reasons we wanted to be one of the first installations. Custom Packaging has always been on the leading edge as far as how they produce things and buy new equipment.”

Gary West adds: “I’ve been in the industry and with our company for 40 years. I bought that machine two years ago. Every week I go out to that machine and shake my head in almost disbelief that we can print at these speeds. For about 10 years I’ve been waiting for the machines to get to the same speeds as a rotary die-cutter. We’ve had digital printing at our plant for probably 15 years, but that was for making graphic samples. I can’t believe we’ve got to where we are with this. It’s just one small step below litho, but it’s about four steps above direct print. It’s a great asset and we’ve been really happy with it.” 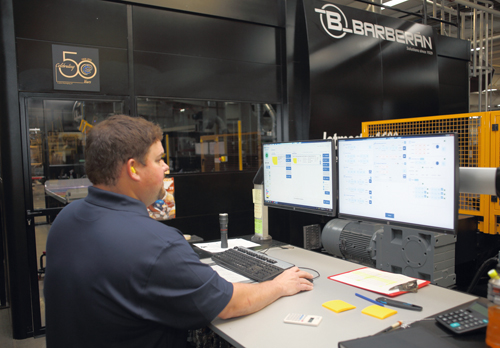