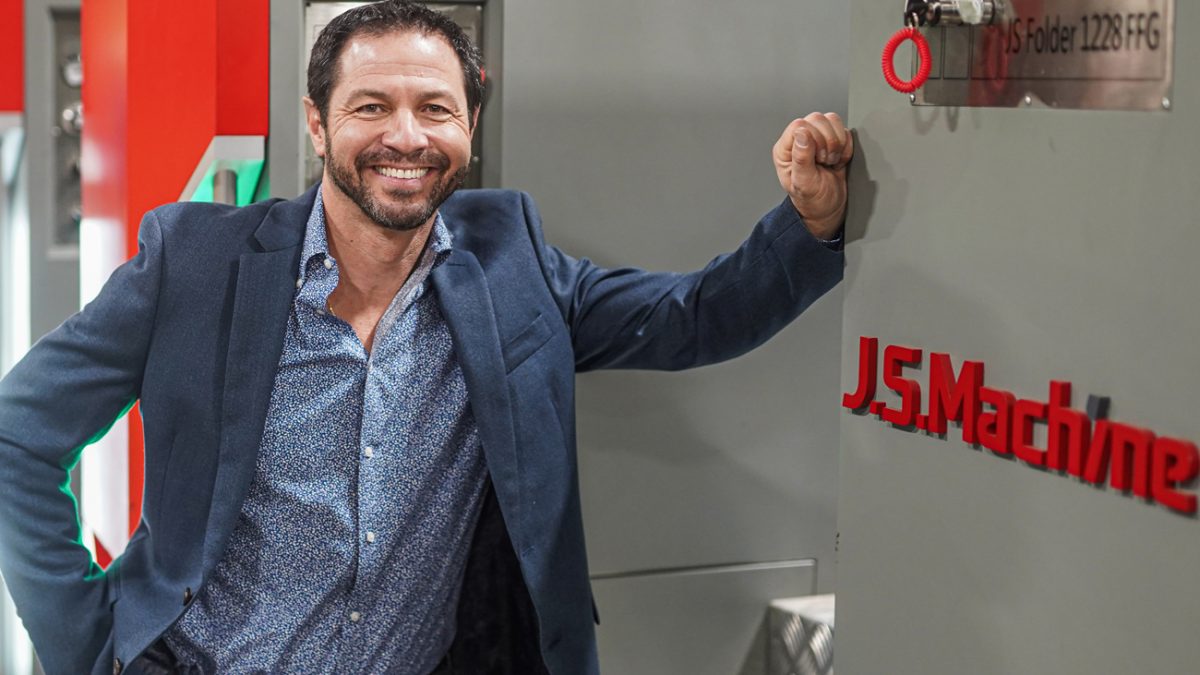 Derek Volk, owner of Biddeford, ME based Volk Packaging, along with his wife and Communications Director Amy Volk, explain how their focus on continuous improvement has allowed them to grow their business, pursue new markets and expand their capabilities. 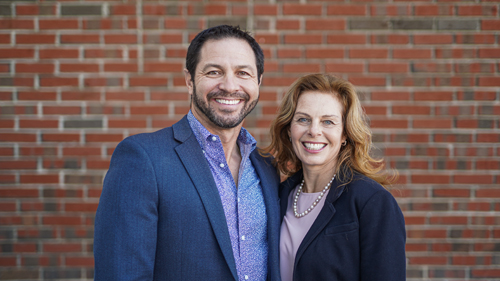 In September 2020, Volk installed a new JS 1228 50” flexo folder gluer with rotary die-cutter. “We have the first JS machine in the country and that’s something we are really proud of,” said Volk. The investment in the JS 1228 has paid off. Volk explains that the print quality is flawless and the color printing has allowed them to pursue new markets, such as e-commerce. “The increase in efficiency since the installation, has been massive,” said Amy. “An order that used to take four to five hours, now takes less than an hour. It’s amazing what we are able to pump out with the new machine.” 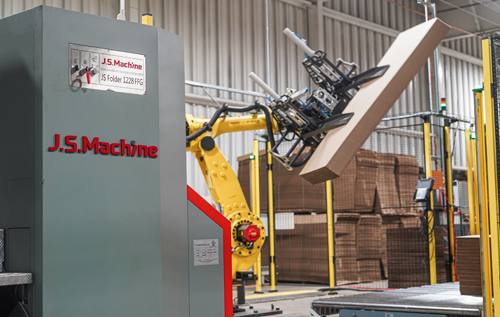 Also included in the nearly $4.5m investment was all of the ancillary equipment, including Automatän AutoFeed and AutoStak robots, Systec Conveyor and an upgraded waste scrap system.

“The AutoFeed has been running great with nearly zero downtime. It’s amazing how efficient these robots are and we are super impressed with them so far,” comments Volk. “Our main goal in purchasing the robot was to improve safety and reduce workers comp claims. It’s been a home run.”

“JS has been tremendous to work with,” said Volk, who purchased the machine unseen, after sending his maintenance manager and the machine operator to China to look at the machinery. “They came back and said they were confident in this decision. Shortly after they returned, COVID hit, so I trusted their judgement and signed off on it.”

“We have been so impressed with our first machine that we have actually ordered another from them.” Volk is planning a late summer installation of a JS 1628 66” x 110” rotary die-cutter with four color outside and two color inside printing capabilities. With the option for inside/outside printing, they expect to see a rise in business coming from e-commerce and other niche markets.  This second phase of the ‘continuous improvement plan’ will cost another $3.5m for the rotary die-cutter, conveyor and robots. After the installation of the rotary die-cutter, Volk plans to purchase a miniline from J.S. Machine as well. 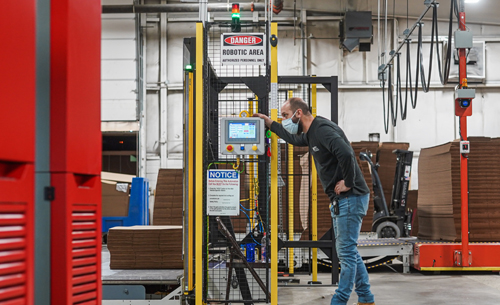 Volk recently announced that they will be installing 77,000 sq ft of solar panels on the roof of their building in mid-March, as part of their sustainability investment. “We will be generating so much solar power that we are actually working on providing power to a local middle school that’s about a mile away,” said Volk. 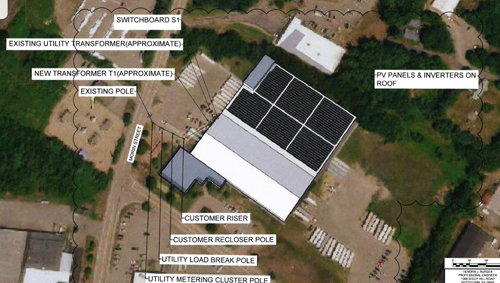 Along with the solar panels, they have replaced 402 light fixtures throughout the office and plant, resulting in a 66% decrease in energy consumption and more than $54,000 in electrical savings per year.

They also purchased a new state-of-the-art air compressor and scrap system. “The scrap system has been terrific in allowing us to produce nearly zero waste and really reduce our carbon footprint,” said Amy.

The excitement in Derek and Amy’s voices is clear when they’re talking about the new investments and future plans, but you hear a whole new voice of genuine compassion as they speak about their employees and the culture that has been created at Volk. Continuous improvement of internal relations, cultivating a culture of gratitude and investment in people, has contributed to Volk Packaging earning numerous awards including ‘Best Places to Work in Maine’ and has helped them retain employees so effectively. Volk reports that roughly 10% of their work force has worked at Volk for more than half of their life.

“There’s so much that goes into creating this culture and the fun that we try to have at work,” says Amy, discussing the Corrugated Olympics and various other contests held throughout the year. Corrugated Olympics are a plant favorite and something that employees look forward to every two years. “It’s a combination of corrugated cross-country skiing, hockey, basketball. We even have a corrugated podium and medals,” said Volk. 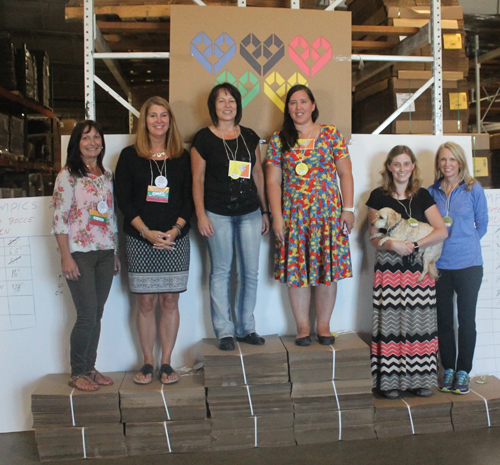 In order to connect with his employees, Volk initiated ‘Breaking Bread with Derek,’ and took every one of his employees out for a meal last year. “People open up when you have a meal with them. You learn so much more about a person than you would during normal day-to-day interactions at work,” said Volk.

Volk Packaging is fortunate enough to have made it through nearly a year of the COVID-19 pandemic with zero cases reported in their plant. At the beginning of the pandemic, Volk assured its employees that there would be zero layoffs. Fortunately, they have been able to deliver on that promise with the help of their employees. “In the beginning of COVID-19, we didn’t have one person call off or say that they felt uncomfortable working. If they had childcare issues, the company covered that expense, so that we could maintain our workforce,” said Volk.

“This year, we’re expecting significant growth and will need to hire more employees within the next month or so,” said Amy. “With the new machine, we’re going after new markets and larger customer share. We have more than 1,000 customers which aided us during the pandemic. We’re not dependent on any one industry, so we weathered the storm and did well.”

The pandemic presented Volk with a new opportunity in fulfilment, with Volk Pack, a new division of VPC. In August, a customer approached Volk with a need for repackaging a specific medical supply, to be sent throughout the US. This job has led to additional customers and has caused Volk to expand this division into another building less than a mile away.

Overall, Volk Packaging is well-positioned for continuous growth, thanks to their investment in new equipment, technology, automation and people. New doors have been opened for them with the installation of the JS 50” flexo and with Volk Pack, which they hope will be hugely successful.